After getting a look at the first seven fighters to be included in NetherRealm Studios’ upcoming fighter, Mortal Kombat X, over the past two months, it appears that the next character has been outed ahead of series co-creator Ed Boon’s intended reveal at Gamescom 2014.

For those who can’t wait until then, an unidentified German Magazine has spoiled the surprise ahead of time and revealed that the Black Dragon clan leader, Kano, will indeed be included in Mortal Kombat X’s roster.

Check out the first images of Kano below: 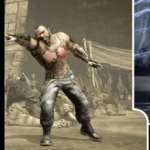 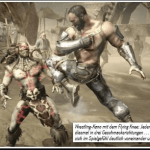 From the looks of it, one of Kano’s variants will be “Wrestling” and will include a flying knee attack. Unfortunately, no other information was leaked as those two images were the only things to hit the internet this weekend.

Elsewhere, it appears that German magazine, GamePro, will be featuring Mortal Kombat X as their next cover story, so it’s possible that the images above were taken from their September issue.

Additionally, the studio has outed a new trailer focused on the previous character reveal for Raiden. Boon walks through some of his different styles and special moves and also confirms Kotal Kahn as the new Emperor of the Outworld.