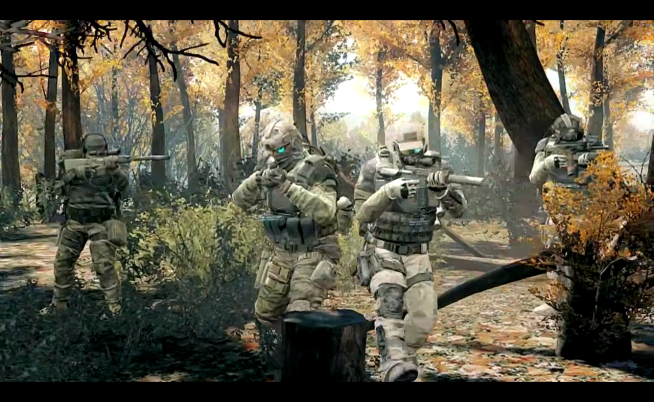 Red Storm Entertainment dishes out the details on the various co-op modes included in Ghost Recon Future Soldier and walks through many of the features available at a Ghost’s finger tips in the brand new Ghost Recon Network.

As many of you Ghosts already know, Ghost Recon Future Soldier’s Campaign, in it’s entirety, will be playable as four-player co-op, including split-screen. You can check out some footage of GRFS’s co-op campaign in action right here!

The newly introduced Guerilla Mode will allow players to tackle waves of enemies as a four-man team in intense and unforgiving firefights. Ubisoft has stated, however, that Guerilla Mode will not support matchmaking, but for some very legitimate reasons. Associate Producer of GRFS’s Multiplayer Kenneth Price explains to Machinima’s Mr. Sark:

[Guerilla Mode] only for your Xbox LIVE [and PSN] friends. And, the reason we did that is the game requires so much cooperative play, you getting in a game and just getting in there with a guy, even if it’s just one guy who’s just going to run around with a shotgun and go through enemy lines and not play as a team, it’s going to screw everything up. It’s really not going to make it a fun experience. You really need to play with guys you know, guys who want to make it that tactical, fun, communicative experience. That’s really what we’re going for.

Guerilla mode boasts 50 rounds total, equaling to about 30 hours of gameplay over four maps, according to Price. Fear not for those worried about having to sit through 30 hours in one go in order to reach level 50. Rounds can be saved by the host so that players can continue their progress at a later date.

Price also detailed what a typical day in the life of a Ghost in Guerilla Mode will look like:

Round 1: Players will infiltrate and secure enemy head quarters using stealth (if so desired).

Round 2 – 9: Players will be tasked with defending the captured head quarters be defeating waves of enemies.

Round 10 (Boss Round): Players will be challenged with tougher enemies including vehicles and riot-shield wearing foes.

Upon completing the first 10 rounds, the head quarters will then move to a different area of the map and the cycle will begin again. However, Price promises varied locales and continuously changing gameplay to keep players on their toes.

Leaderboards will not be supported in Guerilla Mode at the moment but achievements and progress will be kept track of on the Ghost Recon Network.

Rob Newns, Lead Designer on the Ghost Recon Network (now available on Google Play), a free service launching in conjunction with the release of GRFS, also went through some of the neat features that will be available to those using the service. According to Newns, players will have access to everything within the game like stats and achievement progress. Additionally, squad management and 3D Gun Smith will also be at the players’ finger tips. For those wanting to learn a thing or two about how to improve their game, heat maps can also be studied in the GRN. The Ghost Dossier will keep track of players’ careers and will include its own progression system. Not only with the Ghost Dossier keep track of your achievements in GRFS, but future Ghost Recon titles as well.

Make sure to catch up on the latest Ghost Recon Future Soldier Beta details right here.