According to the latest announcement from Xbox One’s Preview Program, participants will get 10 days of early access to 343 Industries’ upcoming Halo 5: Guardians multiplayer beta.

Launching publicly on December 29, that means Xbox One Preview members will be able to download the beta and hop on servers starting tomorrow, December 19. The announcement reads that early access will end on December 21, however, so you’ll need to get in some game time this weekend if you want to get a head start.

The early access period will also only offer content from Week 1 of the Halo 5: Guardians beta, whereas the full version will offer seven maps and three game modes over the course of three weeks from December 29 to January 18. 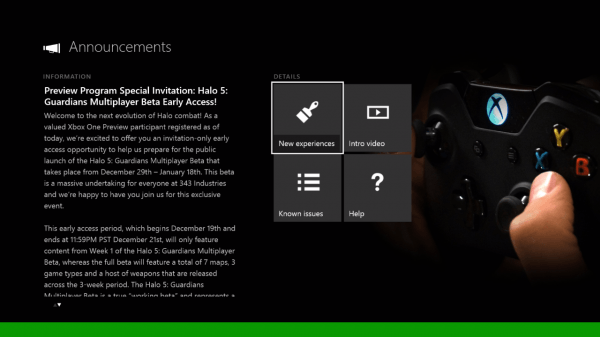 If you are an Xbox One Preview member, you can read the announcement for yourself on your Preview Dashboard. Messages detailing how to download and participate in the early access period will be sent out tomorrow. Be sure to read instructions.

Leading up to the public launch of the beta, 343 Industries is documenting the development process behind-the-scenes in a new digital series called “The Sprint”. More details and trailer here.