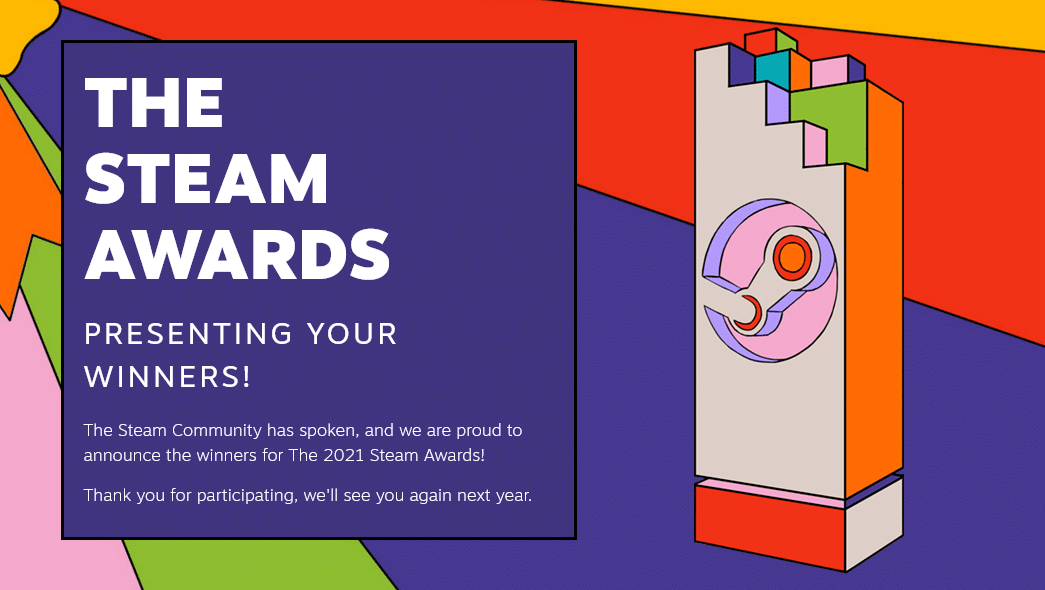 Following thousands, if not millions of votes cast by the PC gaming community, here are The Steam Awards 2021 Winners list, celebrating all of the best PC titles on the platform! Check them all out below and see if they were a surprise, expected, or something else; either way, these are the picks from the largest PC gaming community.

Maybe it was its immersive gameplay, or its gripping story… its well-crafted characters, immaculate design, or addictive multiplayer. Whatever the reason, the winner of this year’s Game of the Year Award is an instant classic.

The VR Game of the Year isn’t merely masquerading as regular reality. This game improves on reality, taking advantage of the medium of VR and pushing the boundaries of the virtual realm.

This game has been out for a while. The team is well past the debut of their creative baby, but being the good parents they are, these devs continue to nurture and support their creation. This game, to this day, is still getting new content after all these years.

Better With Friends – It Takes Two

Visual style doesn’t aspire to real-world graphical fidelity (though a noble goal in itself)… it describes a distinctive look and feel that suffuses an entire game.

The designers of this game are at the front lines of creative experimentation, bringing a fresh perspective and brain-breaking surprises. This game delighted, inspired and entertained with newness never played before.

Best Game You Suck At – Nioh 2 – The Complete Edition

This is the game that rewards persistence, and is not for the faint of heart. It’s the toughest game we’ve ever loved.

This unsung hero deserves to be recognized for its outstanding musical score. It’s the OST with the MOST!

Some days, only a narrative-heavy game will hit the spot, and this one packs a wallop. It’s as gripping as any soap opera, and as well-tuned as a prestige-TV screenplay. Bravissimo — for making us feel things!

Sit Back and Relax – Farming Simulator 22

This game is the antidote to a busy day. It’s smooth, it’s relaxing, it lets your worries melt away. This game is your moment of zen.

Congratulations to all the winners of The Steam Awards 2021! Do you agree with this list? Let us know in the comments below, and check out the ongoing Steam Winter Sale for the best deals on the platform!