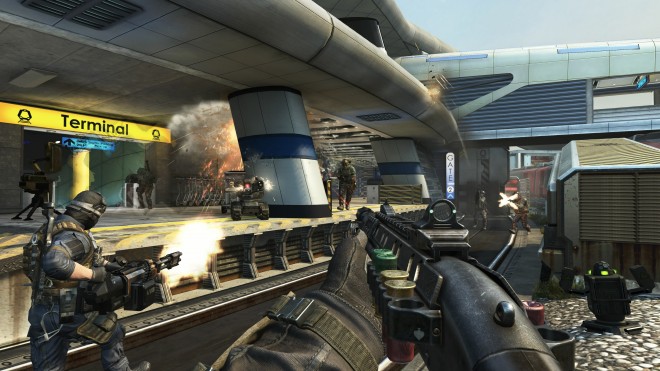 PlayStation 3 and Xbox 360 users can look forward to an incoming Call of Duty: Black Ops 2 update.

According to Treyarch, a PlayStation 3 update will be dropping tonight at 11pm PST while Xbox 360 users can expect a similar update this weekend.

No details or patch notes have been given as of yet, but we will be sure to update this article as soon as they become available. Keep your sights on MP1st!

Title Update 1.04 is now available to download for Xbox 360 users. Patch notes are similar, extept for:

Theater mode for both platforms should now also be re-enabled.

Game Design Director David Vonderhaar writes on Twitter, “lot of updates you’ve been Tweeting us about contained in those update notes, including our first gameplay balance pass.” Regardin Theater Mode, Vonderhaar states, “when enough people have the update, we will re-enable the Theater. Probably sometime tomorrow mid-day.”

He went on to comment on how gameplay balance decisions are made:

How gameplay balance decisions are made. Math + Feedback = Tuning. But mostly math. Sometimes what you have to say and the math agree. Sometimes, they do not agree. Where they agree is that hipfire SMGs needed to get de-tuned. True story. I couldn’t pay people to use SMGs in development. When the game came out, I couldn’t pay people to use anything else. They get nerfed a bit. But some ARs get buffed. Some equipment gets detuned. The patch notes tells you exactly what these changes are.

He concluded, saying, “this is the not the first or last time we’ll touch it. It’s the hardest and most rewarding part of the job.”

The following is a list of numerous gameplay balancing tweaks that were made after thorough review of statistical data from usage patterns of weapons, equipment, perks and scorestreaks since launch.
Scorestreaks: