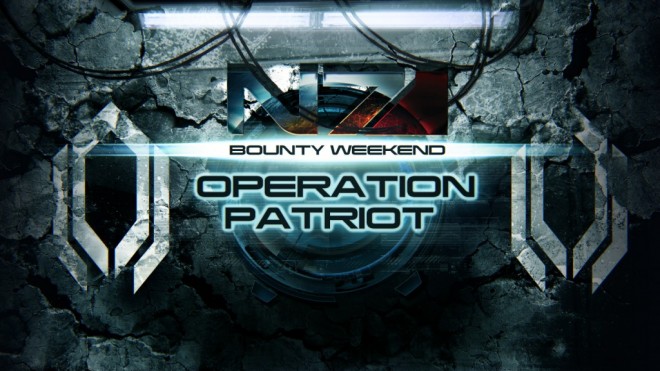 Operation: Patriot begins September 21 for those still enjoying Mass Effect 3’s multiplayer and carries on throughout the weekend until September 23.

“Cerberus continues to put pressure on our troops, hindering our fight against the Reapers. Our allies have committed their top military units to target Cerberus’ most valuable assets: their Atlas Mechs,” writes the BioWare Blog.

Squad Goal: Extraction on any difficulty with all squad members as the same non-human race. Requires 2 or more players in squad.

Allied Goal: Kill 600,000 Atlas Mechs on any map at any difficulty.

BioWare also announces a brand new, unlockable assault rifle being added to the multiplayer arsenal, previously only available in the single player: The Argus Assault Rifle.

The Argus is a high-powered rifle favored by senior C-sec officers. An excellent close-range weapon, its bursts of fire ensure ammunition conservation during lengthy conflicts. Other law-enforcement agencies across the galaxy are adopting the Argus as their standard rifle, as much for its intimidation factor as its suppression power.

As a special treat, BioWare has also updated the latest multiplayer telemetry data and presented it in this neat diagram below. Check it out (click for a larger image) and tell us, are you still enjoying Mass Effect 3’s multiplayer and looking forward to even more DLC and community events? 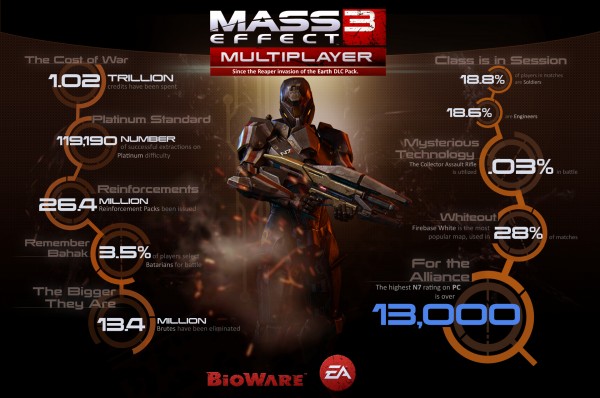