You’ll see the Future Imperfect title update included in the roadmap (it’s out and here are the patc notes for it), as well as planned title updates to “summer and beyond.” 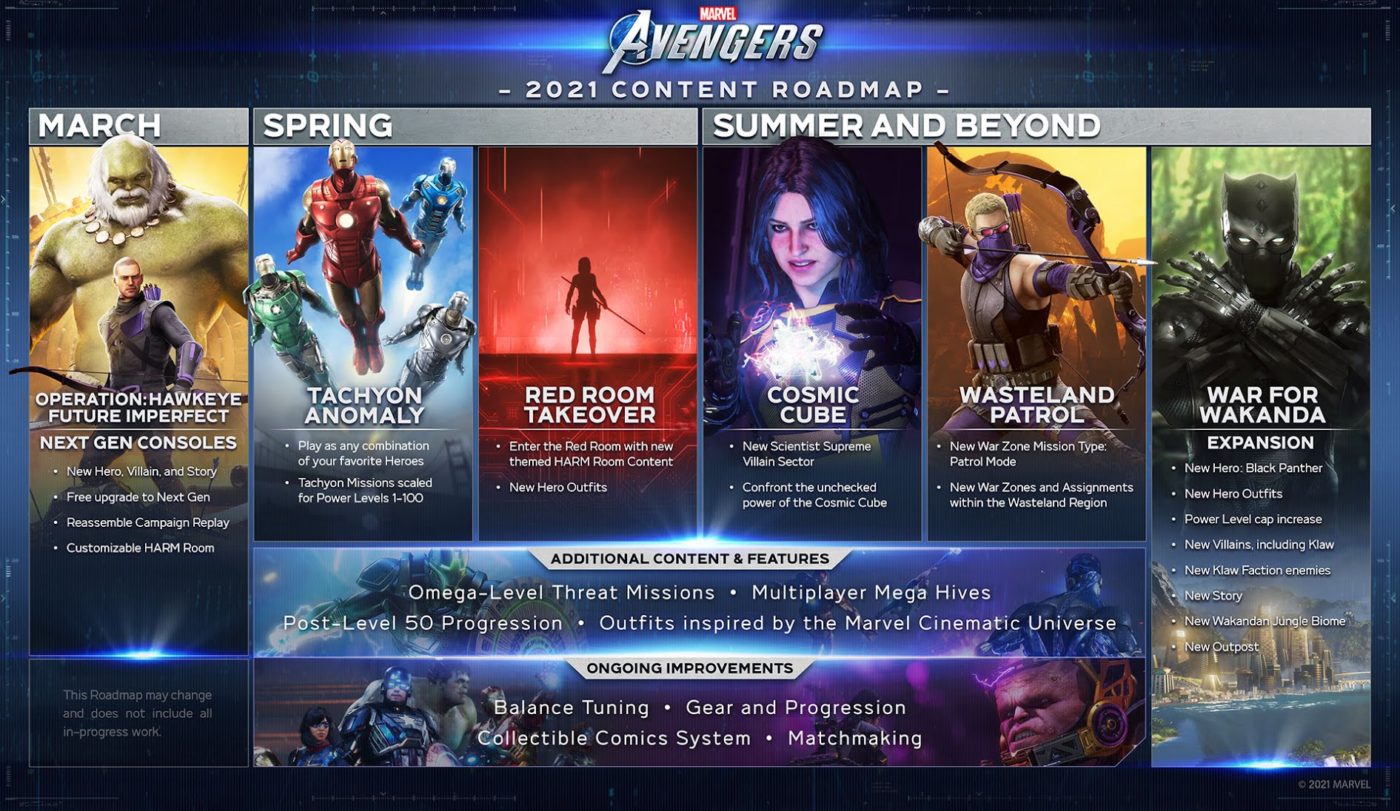 During this event, Tachyon Rift Missions will appear more often, and will be scaled for Power Levels 1-100 so more players can experience them and have event-specific rewards.

Since launch, we have heard players ask if more than one of the same Hero can be present in a Strike Team. We’re happy to announce that during the Temporal Assault event, you’ll be able to play multiple of the same hero in the Avengers Initiative. If you’ve always wanted to see what a team of four Hulks is like, this event is for you!

It’s Monica’s time to shine in her very own Villain Sector as the Scientist Supreme, featuring a brand new battle where players must confront the unchecked power of the Cosmic Cube.

A new Patrol Mode mission type that allows you to explore the largest War Zone area to date, complete quests, and earn rewards without the constraints of a mission. You can explore these areas as long as you want and complete Assignments at your leisure!

Black Panther is coming in 2021 along with more Villains like Klaw, a new enemy Faction, the Wakandan Jungle Biome, a new Outpost, a Power Level cap increase, and much more. This will be the biggest content drop since launch. We can’t wait to show you everything that is coming with Wakanda.

We’re always working on tuning combat, gear, and matchmaking as you’ll continue to see in our upcoming patches, including the ability to use the directional pad in menus.

Omega-Level Threat missions have been the most significant development challenge since we launched the game. The feature works, we have our devs and QA teams playing every day, but we’re still tracking down bugs that we need to resolve. We want to make sure we’re confident that the quality is rock solid.

We’re also working on post-level-50 progression, outfits inspired by the Marvel Cinematic Universe, and multiplayer Megahives. We can’t wait to show you more!

In addition to the roadmap, we got a sneak peek at T’Challa! Now, don’t get too excited, the Marvel’s Avengers Black Panther teaser is super short, but it is something.

“Black Panther and the War for Wakanda are coming to Marvel’s Avengers along with Klaw, the Wakandan Jungle Biome, new enemies, and much more.”

Hopefully, Crystal Dynamics was being truthful when they said Marvel’s Avengers will be supported for “years to come.”