In 2018, Insomniac Games struck gold when the developer created Marvel’s Spider-Man (read our review of it here). By now, everyone should know the gist behind the webhead: gets bitten by a spider, “great power comes great responsibility”, a wide range of villains, and of course, a slightly deranged journalist that tries to discredit him. After Peter Parker saves the day, it’s revealed that another person has been bit by a radioactive spider. Someone who will also take up the mantle of Spider-Man: a young Afro-Latino teenager from Brooklyn named Miles Morales.

New Kid on the Block

The game kicks off shortly after the events of its 2018 predecessor. Peter has taken Miles under his web to show him what it takes to be Spider-Man. After what should’ve been a normal prisoner transport erupts into a wide destruction brouhaha with Rhino, Peter tells Miles him and Mary Jane are going out of town for a few weeks. Patrolling the streets of New York on his own in Peter’s absence, Miles is constantly reminded that he is the “other” Spider-Man. Learning to discover more about who Miles is as a person and how it morphs him into the Spider-Man he wants to be is a recurring theme throughout.

Much of the same button layout and mechanics of the first game return in this mini sequel. Miles has four different gadgets to select from: classic web-shooters, holo-drone, remote mine, and gravity well. The holo-drones come in handy fighting in large groups of people, because the holo-drones can disperse the crowd a bit and might also take down one or two baddies along the way. If you’ve played Watch Dogs: Legion, the remote mines are very similar to arming traps for enemies to walk into and get electrocuted. The main difference is Miles has full control over when the mine activates. I never used the gravity well during my 8-9 hour playthrough, mainly because I was saving Activity Tokens to purchase new suits, but the gravity well also seems most effective in large crowds, pulling enemies together and knocking them down. 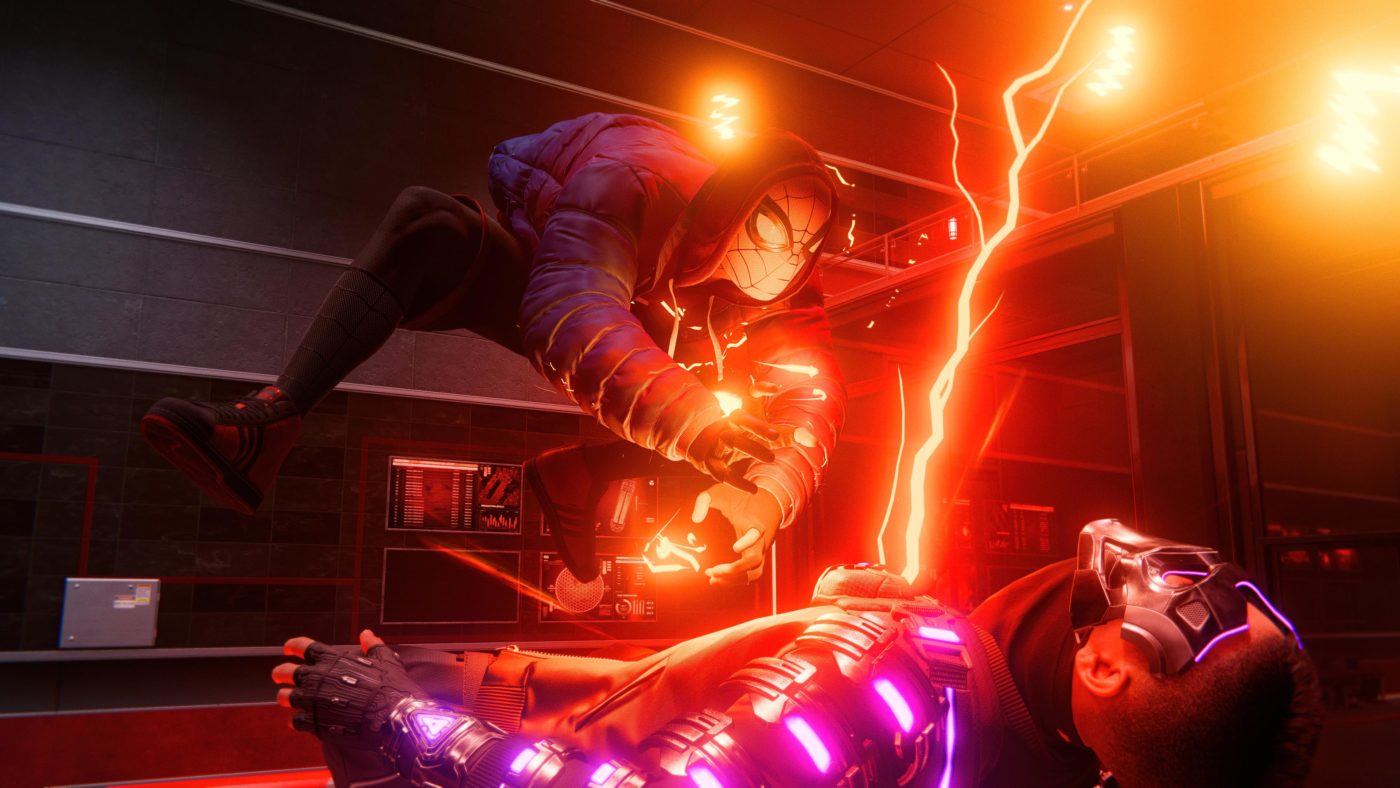 There are three distinct skill trees: combat, venom, and camouflage. No, we aren’t talking about the evil guy in the black suit known as Venom. Miles possesses two more powers that Peter doesn’t: invisibility and bioelectricity, otherwise known as venom. As Miles lands normal attacks and performs perfect dodges, a series of bars with a lightning bolt will begin to fill up beneath your health bar. Once the bar is filled, Miles can perform a series of electric-based attacks for increased damage and more intense finisher moves. There are also certain obstacles in missions that require Miles to use his venom power, like to disable a generator. Wonder how Pete would’ve solved that one?

Now for the fun part: the suits. I’m pleased to say that the options for young Miles does not disappoint. Whether you want to reenact “What’s Up, Danger?” from Into the Spider-Verse or swing around New York with a cat in your backpack there’s plenty of unique and stylish Spidey suits. Photo Mode was my best friend after unlocking a new suit. The sphere light was a great tool to use to brighten up the area to make Spider-Man pop a bit more. There’s also plenty of filters and frames to experiment with to take your photo to the next level. 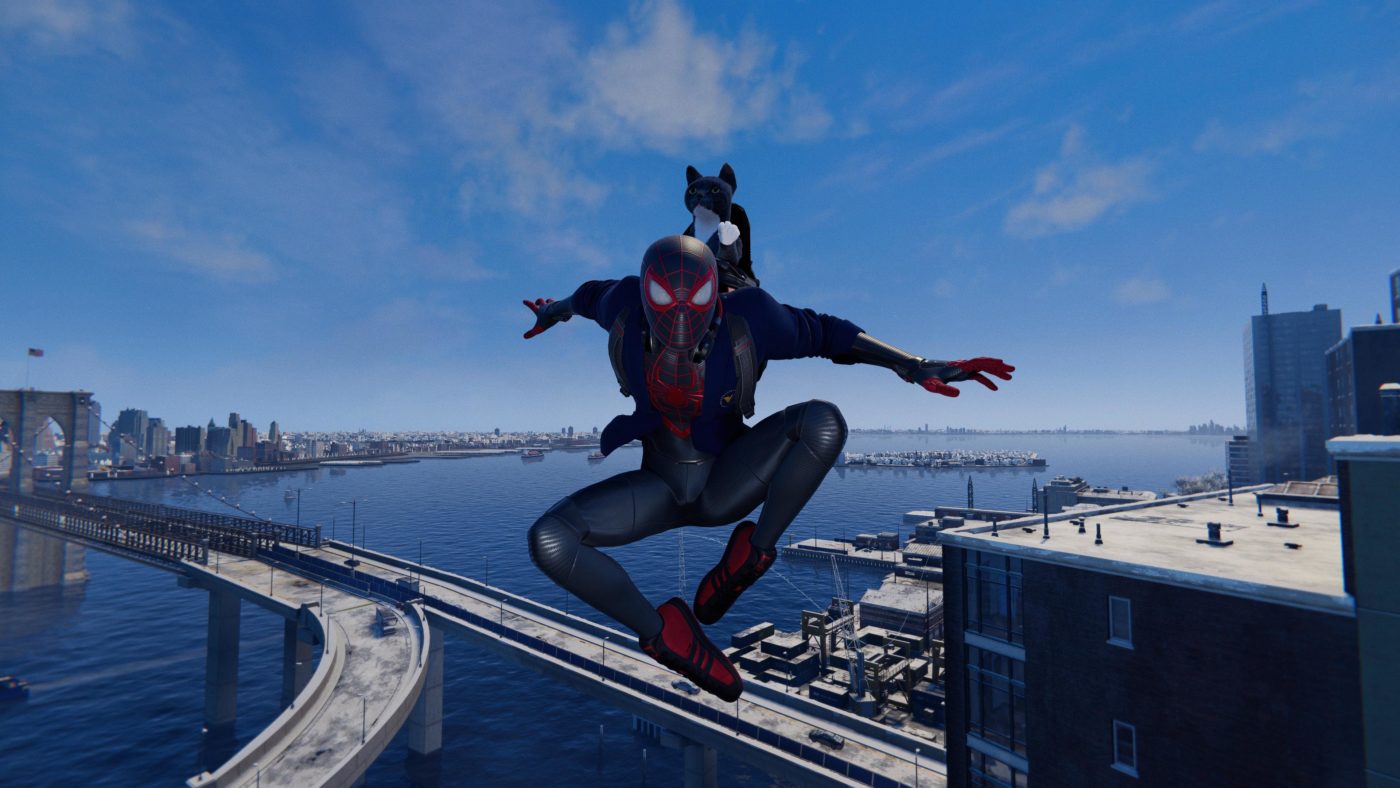 Spider-Man: Miles Morales is graphically amazing (looks spectacular on the PS5) and load times are non-existent (took roughly two full seconds to fast travel). While Insomniac should be applauded for these achievements and for telling a great story, it’s important to acknowledge the incredible amount of representation in the game. Predominately, superheroes have been white. Sure there are heroes like Black Panther and Falcon, but the overwhelming percentage of superheroes points to one type of demographic. Slowly, we’ve seen more and more people of color (POC) heroes break the mold, and I’m extremely happy to say that Insomniac absolutely nailed it with Miles.

With Miles being of both African and Puerto Rican descent, Insomniac did an amazing job in showing how important his heritage is to him. From the get-go, we see Miles speaking fluidly in both English and Spanish, and not only to his mother, Rio, but others who reside in his new home of Harlem. We get a glimpse of Miles performing a little Bachata with an elderly woman. Later in the story you learn that Uncle Aaron and Miles’s late father, Jefferson, were in the middle of creating their own mixtape, prompting the young teen to start recording sounds himself. Miles finds a Spider-Man suit at the foot of a Black Lives Matter mural. And in one mission, Miles is tasked with helping a young deaf woman named Hailey Cooper and they communicate through ASL. 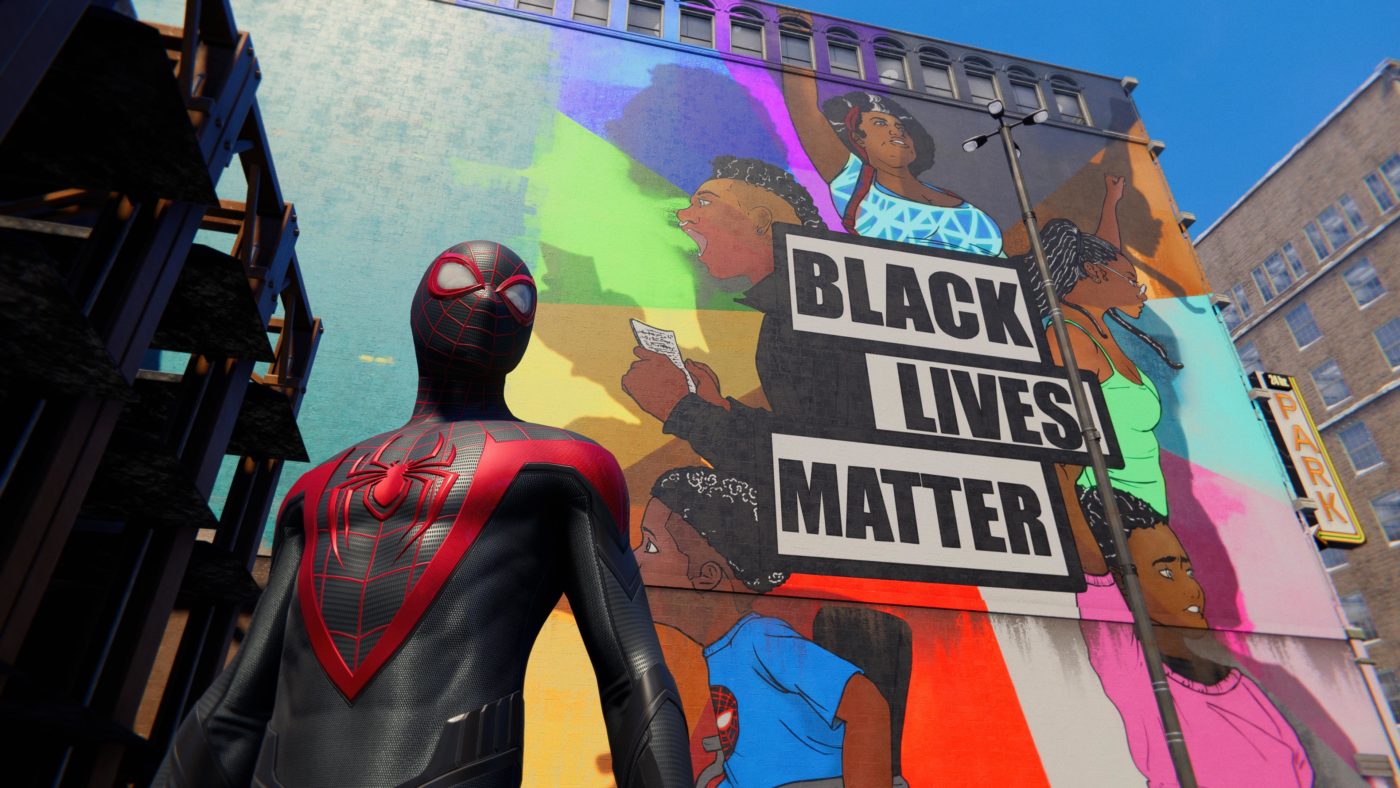 Some may scoff at the idea of praising Insomniac for doing something so “simple” or “obvious” with these forms of representation. If that truly was the case, why don’t we see more of it? Insomniac could’ve easily had Miles only speak Spanish with his mother for a couple scenes at the beginning to establish the fact that he can speak the language. Instead, the conversations with Miles and Rio using both English and Spanish so smoothly helped make the experience feel real. Insomniac made it a point to show how his Puerto Rican heritage helps define who he is as a character.  With racial discrimination and hostility happening across America, Insomniac reminded everyone that Black Lives Matter. As a Black man myself, seeing a BLM mural like this is so amazing and I can’t express my gratitude to Insomniac for knowing how important this is — especially in a game with Miles Morales as the lead character. They know what’s right and aren’t afraid to show it. They introduced Hailey as a very talented street artist, but who had a hearing impairment. There’s no real reason why she’d have this impairment, other than to show representation to those who do have it. These decisions go beyond building a virtual world, these decisions are made because we don’t see this level of representation anywhere. Insomniac’s message is crystal clear: no matter what color you are, what language you speak, or what disability you may have, you’re someone special and deserve to be seen.

Peter Park may be the original Spider-Man, someone that many will always think of when they hear the webslinger’s name. And while Peter strives to protect all of New York, he doesn’t truly represent everyone. He isn’t someone we can truly look up to and envision us behind the mask. Miles Morales is different. Miles is a Spider-Man who represents countless individuals who feel overlooked, unheard, and disrespected. A Spider-Man that understands the struggles that others might not. A Spider-Man I can look at and say, “we aren’t so different.”

Miles Morales is our Spider-Man.