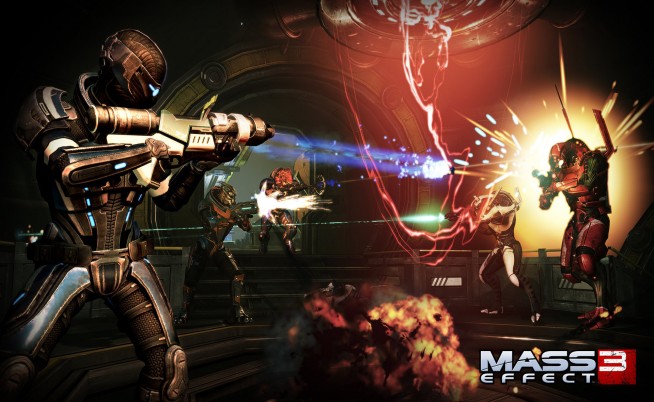 Expect more Mass Effect 3 multiplayer in the near future, or not.

Last month, ME3 fans were treated to a free DLC pack, Mass Effect 3: Resurgence, which featured new weapons, maps and characters. According to Sony’s Hong Kong website, a second multiplayer DLC, titled Mass Effect 3: Rebellion, is seemingly in the works. This listing, however, was quickly removed as it was most likely posted accidentally.

Kotaku was able to gather a few detailes before the info was removed. It listed two new maps: Firebase Jade, set in a  jungle reservoir and Firebase Goddess, set on the Asari homeworld Thessia. It also mentioned three new weapons and six new classes including the Quarian Engineer and Infiltrator, the Vorcha Soldier and Sentinel and the Phoenix Adept and Vanguard. If this was the case, this would mark the introduction of two new and previously unplayable races to the multiplayer component, the Vorcha and the unidentified Phoenix.

No price was listed, though the website it did say that it was currently available in Asia.

Now, before you get too excited, BioWare community manager Chris Priestly quickly addressed the issue on the BioWare forums deeming the rumor false. This is what he had to say: “Sorry folks, this is not true. There is no ME3 MP DLC coming out tomorrow. This is the internet and you cannot ‘unsee’ things, but the details in this are not correct.” He added, “I am not going to close this [thread] or anything as the rumor will continue to spread whether I do or not, but please refer people to my post here when it comes up.”

However, things aren’t all that disappointing. He did also mention, “we will have more information on ME3 MP DLC in the future, I hope later this month, but nothing more to be said now.” Additionally, given his wording, it’s still possible that a DLC titled ME3: Rebellion is still in the works as Priestly only dispelled the rumored release date some of the details, not the project itself.

Keep your eyes open for an official word from BioWare.

How did you enjoy BioWare’s last multiplayer DLC, ME3: Resurgence? Let us know in the comments below.

Why Are These Features Not In Battlefield 3? A Bad Company 2 Comparison