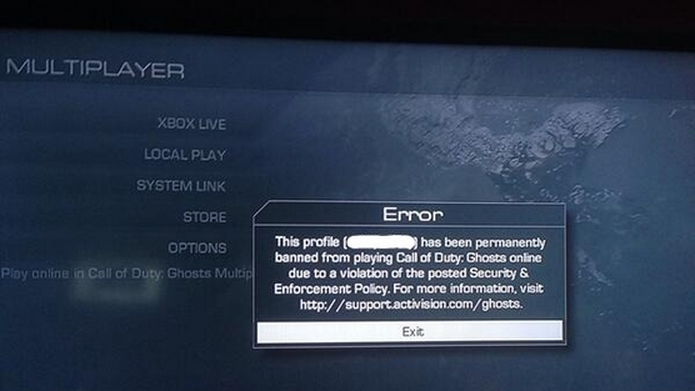 Infinity Ward has announced on Twitter that many of the bans issued were, in fact, incorrect and have since been reversed.

“We understand some players were incorrectly banned over the weekend and we have since corrected the issue. Try playing again now.”

Reports are beginning to surface of a massive ban wave that appears to be primarily targeting PlayStation 3 and PlayStation 4 users playing Infinity Ward’s Call of Duty: Ghosts.

While most of the bans are presumably just, a number of users are claiming bans were issued to them through error and are looking to resolve the mistake.

User “tcsdaniels” wrote a lengthy post on the official Call of Duty: Ghosts forums explaining his situation, saying that he and his son have been permanently banned, despite their more casual approach to the game. “After a bit of research and reviewing the past week or so of the games my son and I played, we believe the innocent players that did not either back out of a hacked lobby (due to not knowing) or were automatically placed into one are getting banned,” he wrote.

“My son and I are clueless when it comes to most of it. Over the last week we did come to an agreement that we were losing a lot more than normal but we just contributed that to the assumption we were just getting placed with better people. We are more often then not the lowest scoring people every round we play and that should not be a reason to ban people and their console’s.”

Similarly, Reddit user “wuzzup” writes, “I too, have been permanently banned. I play maybe a couple hours/week and have never done anything against the code of conduct,” which you can read up on in full right here.

Activision support responded to “wuzzups” claims, explaining that “bans are put in place after an account has been investigated into. Any code of conduct violations WILL result in a ban. The user is responsible for all actions taken on the account.”

“All bans are final and will not be reversed. Nor do we provide any additional information or specifics in regards to the ban,” the response continued.

Aaron of Dublin, Ireland has called for an increase in transparency in Infinity Ward and Activisions’ banning practices via this petition, writing that “this isn’t about the guilt or innocence of any individual player. This is about a fair, transparent process.”

Luckily, it appears that things are looking up for some users.

“themidnightsociety” reports that some users have had luck getting their bans lifted. “It seems as if someone has been listening to us because I just checked my account on COD Ghosts and my permanent ban and console ban has been lifted and everything is back to how it was before the ban,” the user writes.

Ultimately, it’s difficult to analyze which players have knowingly or unknowingly participated in questionable lobbies or have broken Call of Duty: Ghosts’ code of conduct. We’ve reached out to Activision for their take on the situation.

Have you been issued a permanent ban that you believe is unjust?

Both the Xbox One and PlayStation 4 have received significant “security updates” over the past week as Infinity Ward starts to crack down on cheaters.

Titanfall – Respawn Engineer on Xbox Live Compute: “The Internet is Very Sceptical That This is Real”