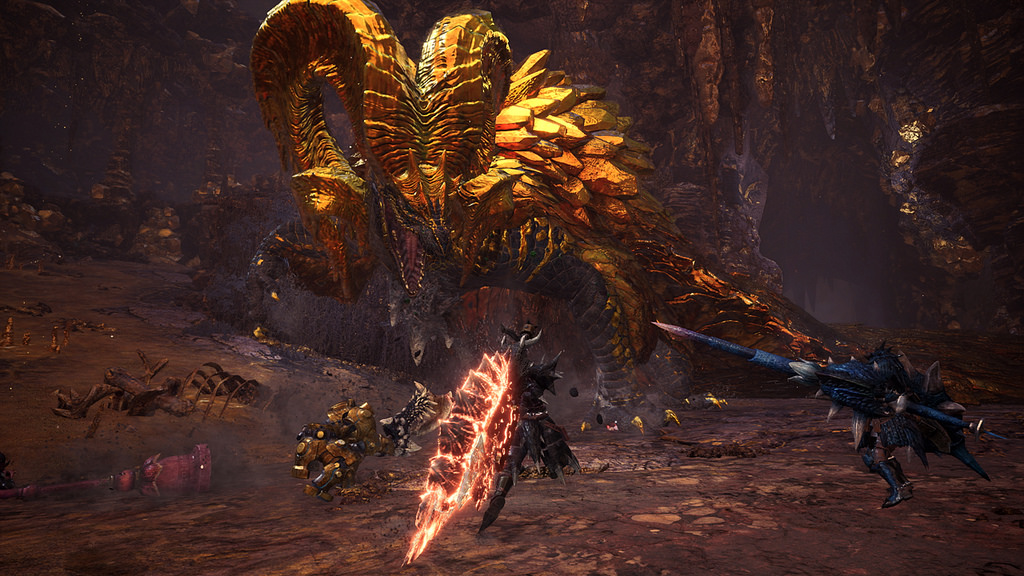 Set to become available via a game update scheduled to roll out at 5 p.m. PT, there’s also a new game mode included in the patch, along with a new loot system! Check out the trailer and official info below.

With the conclusion of the Zorah Magdaros and Nergigante investigations, the path is now clear for new Elder Dragons to emerge in the New World; the perfect opening for the majestic Kulve Taroth.

Cloaked in a heavy golden mantle, this dazzling threat is fast approaching and it’s up to you and your Hunting Squad to work together and repel it at all costs. Of course, you’ll be handsomely rewarded for your efforts.

The new quest type will be called “Siege” and will have players from the Gathering Hub coordinate in breaking off parts to gain better rewards. Note that this is a multiplayer-only quest, and as such, PlayStation Plus (or Xbox Live Gold) memberships are required.

In this new quest type, we invite all of you up to the Gathering Hub to coordinate your hunting efforts with all 16 players in the lobby. Up to four parties of four hunters each can team up and contribute progress, work together to collectively break more parts, and reap greater benefits of hunting the same Kulve Taroth.

Please note that the Siege game mode balance is the same regardless of the hunting party size, and SOS Flares will be disabled for this special operation. Instead, we advise that you make use of the Search for Online Session function or Squad Sessions to find or build a hub ready to take on this massive feat.

There’s a new weapon loot system that players will need to discover by themselves. Breaking off as many parts of the Kulve Taroth and dealing a ton of damage will help in getting the goods. Now for the armor set, the Smithy already has the a and b sets (provided you have the materials), and there’s also the Layered Armor Set, which you can equip on top of your armor to change the appearance.

According to Capcom, the Kulve Taroth Siege will be available for only a limited time, though it will return at a later (unspecified) date.

There you have it, folks! Once the update is live, we’ll be sure to let our readers know.