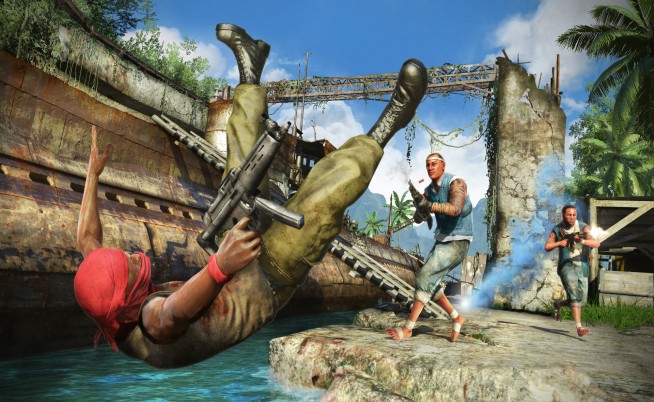 Daniel Berlin, Game Designer at Ubisoft Massive, speaks about the particular approach that the team is taking with the multiplayer of Far Cry 3. He also details the setting of the game and talks a little bit about the engine used to power Far Cry 3’s stunning visuals.

Speaking to Machinima, Berlin talked about what Ubisoft Massive is doing differently with the multiplayer of Far Cry 3 and how it will stand out among other shooters currently on the market.

The approach was definitely more team play, getting more team play in. Massive studio has a lot of online expertise. It’s kind of what we pride ourselves in and we play a lot of online games. It kind of felt like a lot of games, the only team play through action that exists is the fact that I don’t shoot my teammates. We wanted more team play through action going on. And, the games that actually do focus on team play is very class restrictive. I mean, like, if I run around with my buddies and someone gets shot down and I want to revive them but I can’t because I got to switch class. So what we did is we created a series of core team play features, like the Battle Cry, for example.

Berlin also stressed that players can expect a much different setting than what many modern day shooters take place in. “The game is very, very not military.” He spoke of crazy pirates dropping barrels filled with a chemical weapon that makes everyone go insane, much like we saw in the latest Far Cry 3 multiplayer gameplay trailer. He added, “I would say the overall theme is survival on a tropical, beautiful island and that is filled with insanity.”

If you missed it, Berlin confirmed earlier that vehicles would not be returning to Far Cry 3’s multiplayer.

As for how Fary Cry 3 is achieving it’s gorgeous visuals, Berlin explained, “we’re using the Dunia Engine for Far Cry [3] which was the same engine in Far Cry 2. So basically, Far Cry 2 looked beautiful 4 years ago on the Dunia Engine, so since then we’ve done a series of updates so, I mean, the game is just looking better and better and on all platforms.”

Far Cry 3 will release on September 4th in the US and September 6th in the rest of the world simultaneously across all platforms.

What do you think about the multiplayer so far? Will it be just another Call of Duty, or do you think Ubisoft Massive has what it takes to put a unique spin on Far Cry 3?

Meet The Mind Behind Modern Warfare 3’s All or Nothing, BoxOfDemons