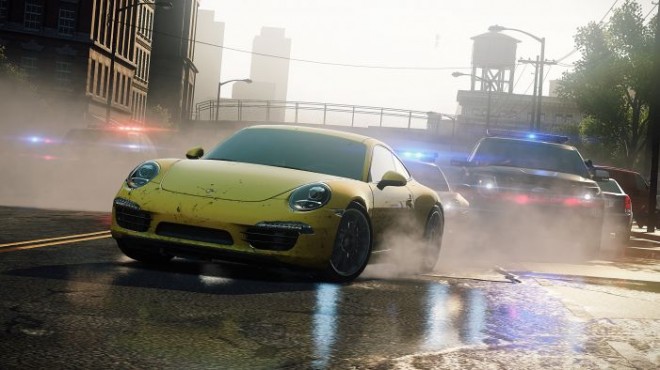 Amongst all the big game titles and hits from the current buzz around Modern Warfare 3’s monthly Content Drops, the upcoming Call of Duty Black Ops II, Assassin’s Creed III, Medal of Honor: Warfighter, the Battlefield 3 expansions and the inevitable release of the Starcraft II expansion, Heart of the Swarm, lies a hidden gem: Need for Speed: Most Wanted.

Having only just been announced at E3 back in June, there are a few details and news surrounding the new game in the action racing series. Scheduled for a 30 October (US) and 2 November (EU) release, the game is fast approaching but will otherwise be blanketed by the new Call of Duty and Medal of Honor game releases. From images, press releases and videos, it seems like the new game will be following Criterion Games‘ Burnout Paradise-style of gameplay and action fitted with the Need for Speed atmosphere and cops chasing you down.

The actual name, the open-world element and cops seem to be the only things which this title is retaining from the original game (Most Wanted 2005, developed by EA Black Box and Redwood Shores – which is now Visceral Games), with no sign of actual storyline or specific car customization (although you will be able to change a few things such as visual aspects and a select few performance upgrades) – a change in direction from the old-style Underground NFS games. A hybrid of the original and Burnout Paradise, the developers explain the change of direction with “everything we know about open-world driving, just piling it together. All the best stuff about Burnout and everything we did in Hot Pursuit, we’re just smashing them together” and also explaining the shelving of Burnout with “it’s more a case of wanting to get Need for Speed back on its feet after last year [referring to NFS The Run, which was poorly received].”

Multiplayer info is thin, but the official website details that it will be “non-stop Multiplayer” with “No menus.  No lobbies.  No restrictions.”

Pick a car, meet up with your friends and enjoy a nonstop PlayList of competitive events.

Influence the PlayList by voting with your car. Fight for position on the start line or turn around to take out oncoming rivals at the finish. It’s online driving, as you’ve never seen it.

It looks like Most Wanted will be taking many features from Burnout Paradise’s multiplayer, where the very limited – if not none at all – amount of menus and loading screens made for uninterrupted and seamless gaming, whether it was going from free-roaming to ranked racing or doing challenges with friends. The open world will be your playground, fitted out with massive jumps, long straights, billboards and gates to crash through and an epic location to drive around while having fun with friends.

Modifications, or Mods, will also be featured so one can kit out their cars to be more powerful, faster or be completely different to someone else’s same car. Like Call of Duty’s perk system, or Battlefield’s Specializations system, you will be able to swap out the performance default for something which will make your vehicle perform differently. No exact specifics have been revealed, but pre-order bonuses suggest that everything from faster acceleration to being able to re-inflate tires (after shredding them from a cop’s spike strip) will be available. These additions, along with customizing liveries and paint jobs, will not only make it so you perform differently to other players cars but will be special to you alone – as if you had the opportunity to do it in real life.

Speed Points (or SP for short) will be the in-game point and currency system. Gaining more Speed Points will allow you to “outdrive your friends” by upgrading your cars, which are all fully licensed cars that feature real-life likeness. From exotics like the Lamborghini Aventador LP 700-4 to muscle cars like the Chevrolet Camaro ZL1 to even a Ford F-150 truck and Hummer H1, the developers reveal that they have the “the wildest selection of cars.”

Autolog, the in-game community hub allowing you to connect to and compete with friends, is being massively upgraded and will be features in Most Wanted, details saying that “intense competition is at the heart of Most Wanted. Autolog™ 2.0 records everything you do in the game, broadcasting your most newsworthy scores, speeds and times to your friends.” It also mentions “Personalization is key.  Teach Autolog™ 2.0 who you really want to beat, and it’ll customize the Recommendations it makes.” The community hub will constantly call-out what your friends are doing and will announce any races, records and special notices if friends have beaten you – and it’s all customizable; you can tune it so you can track all of your friends or focus on a specific rivalry. Autolog will also be a new feature on the Need For Speed website, with the system allowing you to access screenshots (or as they call it Dreamshots) taken in-game, view statistics and leaderboards, and see how your friends are progressing.

The game is available to pre-order for Playstation 3, Xbox 360, PC disc and through Origin. A Special Edition is also available for excited fans, which is available for all platforms, and has exclusive pre-order-only features and content. Included with the standard game are two cars – the “beautiful Maserati GranTurismo MC Stradale and the latest Porsche 911 Carrera S”, 4 hours of Double Speed Points to unlock faster, a custom “stunning satin black” livery for the exclusive cars, and exclusive Multiplayer Modifications which allow you to have better Mods ranging from acceleration to strength bonuses.

There are also other bonuses for pre-ordering at specific stores which are also region determined, so check with the Need For Speed website and your local retailers. GAME UK and Origin (globally) have an exclusive deal where you will get access to two different packs: the Strike and Speed Packs. The Strike Pack gives you early access to the Mercedes Benz SL65 AMG Black Series, a dominating and powerful vehicle stripped out with added “reinflating tyres” and “power pack powertrain” mods. The Speed Pack has the agile Caterham R500 Superlight with “track tires” and “lightweight chassis” mods.

Something which is currently “Coming Soon” for UK residents – a third pack called the Power Pack – is available to Australian & New Zealand EB Games customers, which gives access to the Ford F-150 SVT Raptor kitted out with a “reinforced chassis” protection mod and a “nitrous dump” mod to power up your takedowns to be extra violent.

Check out some of the latest, action-packed Need for Speed: Most Wanted gameplay:

This writer is very excited for the new Need For Speed game coming from Criterion Games, so expect more multiplayer news as and when it happens. Are you revving up for this Burnout Paradise-meets-NFS/Hot Pursuit hybrid?