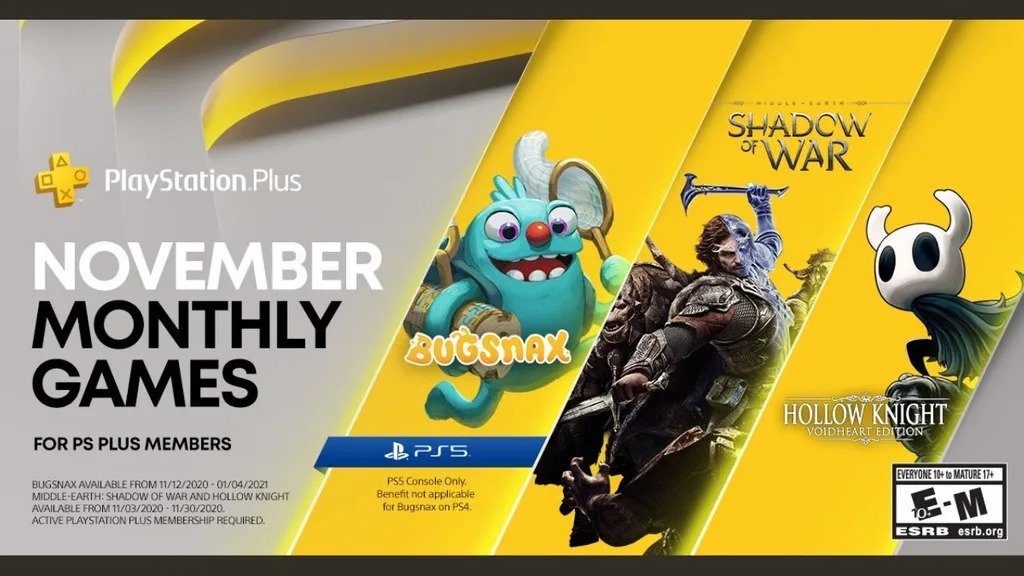 Check out the details on both below! If you’re getting a PS5 (or able to snag one), you’re in for a treat!

Available for PS5 owners on November 12:

The very first PS5 game to join PlayStation Plus is Young Horses’ ultra-charming, whimsical first-person adventure Bugsnax! Play an investigative journalist who has set out to explore Snaktooth Island, home to legendary half-bug half-snack creatures, Bugsnax. Discover, hunt and capture all 100 critters while also tracking down and reuniting the island’s inhabitants.

Bugsnax (PS5 version) will be available to PlayStation Plus members beginning on Thursday, November 12*** until Monday, January 4, 2021.

PlayStation Plus Games Available for PS4/PS5 Owners In November****

Set between the events of The Hobbit and The Lord of the Rings, Middle-earth: Shadow of War beckons you once more into JRR Tolkien’s iconic world of wizards, orcs and elves. Go behind enemy lines to forge your army, conquer Fortresses and dominate Mordor from within. Experience how the Nemesis System creates unique personal stories with every enemy and follower, and confront the full power of the Dark Lord Sauron and his Ringwraiths in this epic new story of Middle-earth.

In Team Cherry’s engrossing 2D explorative platformer, descend into a sprawling underground world of Hollownest to battle tainted creatures and befriend bizarre bugs. Unlock new skills and tailor your power sets to fit your playstyle to help you explore twisting caverns, ancient cities and deadly wastes. Uncover a kingdom’s ancient history, taking on epic bosses that’ll challenge your combat and platforming skills as you strive to solve the mysteries buried at its heart.

Here are the games available in the PlayStation Plus Collection.

From our third-party publishers and developers:

Players will keep the games listed above as long as they are an active PS Plus member. And yes, those who play the games on PS5, you’ll see upgrades such as faster loading times, more stable framerates and more.

In other PlayStation news, the global PS5 launch ad has dropped today! Watch it here. We also posted a bunch of PS5 unboxing videos yesterday, alongisde size comparisons with other consoles too.