According to an image of a website ad captured by Reddit user Probably_Unemployed (aka DattoDoesDestiny), users on the PlayStation 4 and PlayStation 3 will get four days of exclusive access to the upcoming Destiny beta. 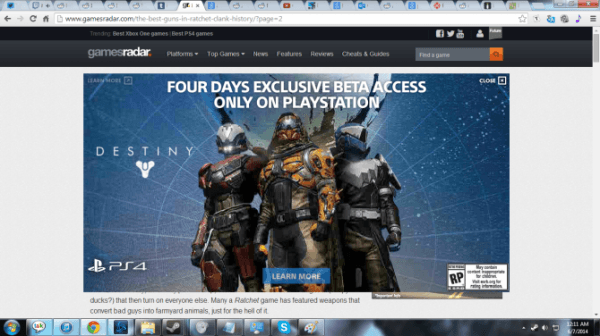 Clicking the ad leads to PlayStation’s “Greatness Awaits” website, but it holds no further information on the actual beta.

We learned back in November of last year that the beta would arrive on Sony’s consoles first, giving PlayStation users a bit of a head start over Xbox users as part of an exclusivity deal between publisher Activision and Sony. According to the recently spotted ad, it looks like it will only remain exclusive for the duration of four days.

Bungie has officially announced the game’s beta to commence some time in July with a specific launch date to be mentioned at E3 2014, so we’ll likely get confirmation then.

What are your thoughts? If it rings true, is the PlayStation-exclusive portion of Destiny’s beta as long as you though it would be?

PlayStation Now - Bringing The E3 Experience Home; How It Could Be Sony's Secret Weapon