It appears that Xbox’s Larry “Major Nelson” Hyrb has confirmed via his blog that pre-loading will be available for Destiny on Xbox One before it launches on September 9.

In addition, a digital version of Destiny on Xbox 360 will be available to download at launch.

According to the console’s online store, Xbox One users may be able to pre-purchase and pre-download Bungie’s upcoming shooter, Destiny, before its September 9 release. 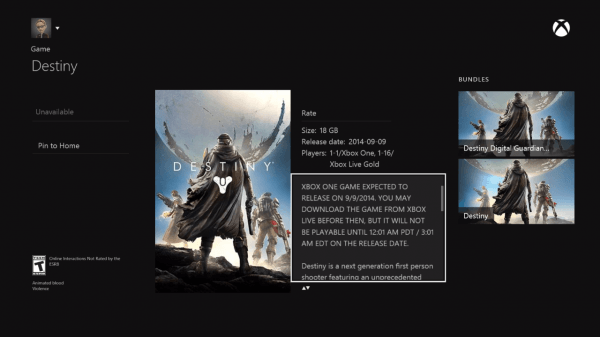 The same appears to apply to both the Standard Edition and Digital Guardian Edition of the game.

Xbox One is expected to receive pre-loading in September, but Microsoft previously made it clear that the feature will debut with the launch of FIFA 15 on September 26 and then Forza Horizon 2 on September 30. No mention of Destiny was made in the original announcement. We’ve also yet to hear anything official from Bungie or Activition regarding Destiny pre-loading on Xbox One.

Keep your sights on MP1st for updates!

PlayStation 4 and PlayStation 3 users will be able to pre-load Destiny starting on September 4.