While the Doppelganger has already been announced as a new playable character coming up in the near future, some data mining of the recently released Borderlands: The Pre-Sequel indicates that Jack’s body-double might not be the only new DLC playable character.

TechnoJacker from the Se7enSins community stumbled on some very interesting information regarding a potential second playable DLC character. Not much is known, other than her name is “Aurelia The Baroness”.

Additionally, TechnoJacker has also managed to produce an in-game image of the character class in question, which you can view below: 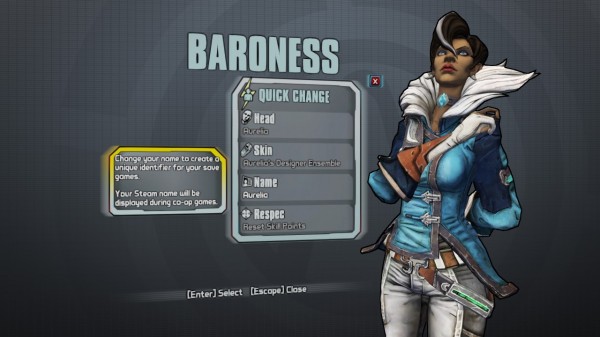 It’s not clear if whether Aurelia The Baroness will be included in the Season Pass, as it description states it will only include four pieces of add-on content and an already announced playable DLC character, Jack’s Doppelganger.

As nothing has been officially announced by either 2K Australia or Gearbox, take the new info with a grain of salt.

Borderlands: The Pre-Sequel is available now for the PC, PlayStation 3 and Xbox 360 platforms.