Rumor – Titanfall Gone Gold, Xbox One Version Might Get Upgraded to 1080p on Launch [Updated]

In response to Twitter inquires, Respawn Entertainment CEO Vince Zampella has denied the rumor that Titanfall will be 1080p on the Xbox One at launch. Aw, snap! (Thanks, Henry Asenime.) 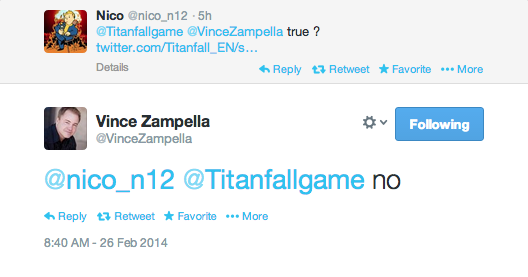 Titanfall might be getting a resolution boost on the Xbox One shortly after its launch on March 11.

A Titanfall community member going by the name “DucatiRossi46” who works “closely with Respawn and EA” has allegedly been told by the studio that “they are aiming for 1080p at launch following the Xbox One patches“.

According to him, “there will be 2 patches pre-release, which should get it to 1080p following the Xbox One patches.”

You can catch screen grabs of the conversation here.

Similarly, an Epic Games employee said on Reddit, “I can tell you Titanfall has gone gold and the final resolution is most def above 720p. That’s all I can say.”

Last we heard, Respawn Entertainment was aiming for 900p at launch after confirming that the beta ran at a 792p resolution. We also recently learned that Titanfall will be a 40 GB install on the Xbox One.

Take the news with a grain of salt for now, but we’ll be sure to keep you updated on any official announcements.