Annoyed at how some people post videos or screenshots of spoilers and share them without any care at all? It seems Sony is doing something about that. The company has filed a patent for what it calls a “Cross Platform Spoiler Block Service.”

Check out the official description and key elements of the filing Sony made at the USPTO (United States Patent and Trademark Office).

A spoiler is a description of an important plot development in a video game which, if previously known, may reduce surprise or suspense for a first-time player. Exposure to spoilers can decrease the quality of the overall gaming experience for a player, and can even make the player lose interest in playing the game. Avoiding spoilers is of paramount importance to players of narrative-driven games. Spoilers can prevent such players from deeply engaging in the gaming community until those players have completed the game, limiting their engagement level with that community.

Moreover, spoilers are one of the biggest concerns for players of single-player and co-op player vs. environment (PvE) style games when engaging socially around those games with their friends or the broader gaming community (e.g., through discussions, walkthroughs, and so forth). This fear can prevent players from engaging in community-building social behaviors, which may result in a significant loss of engagement with the gaming platform for those users. 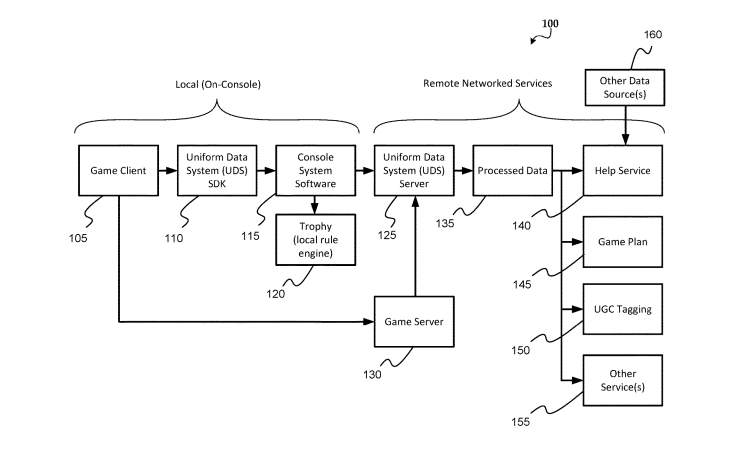 [0023] The following detailed description includes references to the accompanying drawings, which form a part of the detailed description. The drawings show illustrations in accordance with example embodiments. These example embodiments, which are also referred to herein as “examples,” are described in enough detail to enable those skilled in the art to practice the present subject matter. The embodiments can be combined, other embodiments can be utilized, or structural, logical, and electrical changes can be made without departing from the scope of what is claimed. The following detailed description is therefore not to be taken in a limiting sense, and the scope is defined by the appended claims and their equivalents.

[0024] The technology disclosed herein is directed to recognizing which in-game objects (e.g., activities, characters, weapons, and so forth) have been seen in-game by each player, and thus prevent that player from engaging with content (e.g., user generated content (UGC), trophies, lore objects, and so forth) that they would prefer to discover in the game as a matter of course.

[0025] The usage pattern can be similar to that of “hidden trophies” in Sony PlayStation 4. Game developers can mark specific game objects as `hidden` via an appropriate tool, and the details of those objects will be hidden from players until they discover them in the game themselves. As with hidden trophies, players will have the option to override the spoiler block if they so choose. The technology disclosed herein can allow players to engage with friends and the community around narrative games with the confidence that they will not accidentally see spoilers (which can include an activity, character, item, outcome of activity, action, effect, location, and attribute of character or item).

[0026] A uniform data system (UDS) can be aware of what in-game entities and activities users have engaged with, and thus support players in avoiding unwanted spoilers, giving them confidence to engage with the community without fear. The general solution pattern is that any object type can be considered a spoiler, and as such, can be marked as `hidden` by the developer in the metadata for that object type. When that object type is discovered by the player (e.g., an example of a UDS event), it is no longer treated as a spoiler for that player. This pattern can be applied to activities, entities, settings, outcomes, actions, effects, locations and character stats. This approach can result in an increase in the number of single-player and co-op PvE gamers who engage socially around those games, with their friends, and the broader community.

The full filing has the full breakdown of the patent. Basically, Sony’s patent will allow users to block content that is considered spoiler-ish (by the devs and community it seems), and this will let players engage with the community with freedom that nothing in the game will be spoiled for them unncessarily.

What’s interesting here is, it mentions how Sony can hide elements from other players so as to not spoil it, though they can override it, it seems. This patent mentions how weapons, activities, settings and more can be part of this patent, and should be a welcome feature if it’s ever implemented. Speaking of which. note that not all patent filings come to fruition, so this doesn’t mean this is a guarantee we’ll see this in PS5 games and so on.

Of course Sony blocking spoilers is nothing new as the PS4 currently has some features in place that can prevent a user from using its internal capture from streaming or recording certain scenes. Even some trophies get pixelated out if user is allowed to stream and capture.

Talking about spoilers, note that there are legit spoilers that have surfaced for The Last of Us: Part II yesterday, so be careful in watching YouTube videos and whatnot.