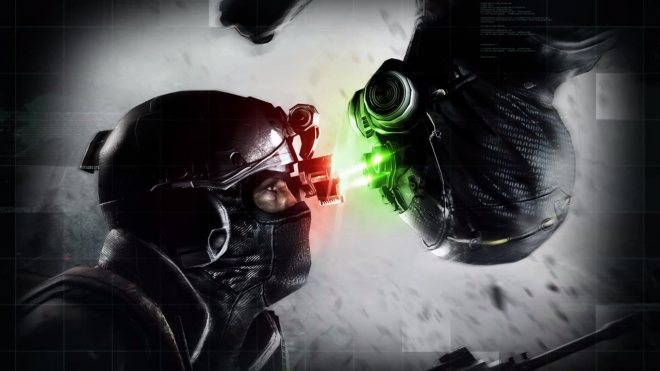 Get the full run down on Spies vs. Mercs, Splinter Cell: Blacklist’s take on the classic, yet very exciting multiplayer mode that pits stealthy and highly agile spies against mercenaries who carry a ton of fire power and a number of nifty gadgets.

The game mode got its first debut trailer last week, wich you can check out right here, but today, we get a look at some more in-game action, along with commentary from the developers over at Ubisoft.

Over on the PlayStation Blog, Ubisoft community manager Zack Cooper answered a few fan questions about Spies vs. Mercs, getting down to the nitty gritty and detailing some of the different modes, gadgets, and customization options. We’ve selected some of the most important questions and answers. There’s a lot to learn, so read on:

Question: So we are getting the old maps back?

Answer: you’ll definitely be seeing some inspiration from some fan favourites in there!

Question: What can you tell us about the games networking? Is it going to use player to player or dedicated services? A good connection system is so crutial for multiplayer.

Answer: Truthfully, I’m not even sure. We’ll probably be sharing that info shortly down the road.

Question:  Also, how will the PS3 version differ from the PC version, which should I pick-up? I assume they will be slightly different for each platform?

Answer: We have dedicated teams working on the both the console and the PC editions. The goal is to have each version identical to one another.

Question: Hey, game looks great. I noticed in the trailers the spies had some weird looking guns they never fired. Are these guns non lethal or do they shoot gadgets or are they actually guns?

Answer: Good eye! The guns are lethal… but they’re only available to the Spies in the BLACKLIST Spies vs. Mercs. The 4v4, highly customizable mode. While we have added lethality to the Spies… getting into an open firefight with a Merc is a very bad idea. You still need to be smart and pick your spots. …Mercs can take a lot more damage than the Spies – who don’t have access to the SAME weapons. There are also a bunch of really cool gadgets to play around with, too!

Question: What steps were took to ensure even balance on blacklist? I mean spies with lethal weapons is scary just saying that maybe it can work I hope so.

Answer: It definitely works. There have been COUNTLESS hours spent on balancing, alone. They’re still tweaking, as well, to make sure we get it just right!

Question: I saw in the video revealed that there’s a lot of spies and a lot of Mercs but what I want to know is can I play the classic 2 on 2 ?

Answer: Definitely!! It’s called CLASSIC SvM. It’s 2v2, and VERY similar to the vibe from Pandora Tomorrow and Chaos Theory’s Spies vs. Mercs. In the video, we (re) introduced you to Gunther Galipot. He was the Creative Director on PT’s multiplayer, and was the man responsible for bringing the asymmetry between the Spies and the Mercs (3rd and 1st person perspectives). We’re bringing that classic feeling back in Blacklist… and we can’t wait for you to play it!

Question: Two questions. One: In Classic and Blacklist mode, what kind of radar will the Mercs have? In double agent if you were near a merc as a spy, they knew because of the heartbeat sensor. Can a merc walk right by you if you’re hiding and not know? Second question is, is there free motion? As in, can you hit Y to jump, or are you stuck on the ground unless a button prompt appears.

Answer: So ONE of the Passive Abilities for the Mercs is a motion detector. If there’s a Spy running around in your vicinity, you’ll see it come up as a red dot. As for the motion, we’ve brought the Active Sprint mechanic from the Single Player into Spies vs. Mercs. It obviously makes you louder, but makes it much easier for you to climb over obstacles, or up walls and into vents.

Question: How far will customization go? (just an example) That is tied together with the next question:

Answer: There is SO MUCH customization in BLACKLIST SvM… weapons, gadgets, vision modes, and armour parts. Breaking down the armour parts, there are gloves, boots, and torso abilities, which bring with them ACTIVE and PASSIVE special abilities. In all, it equates to more than 540 possible combinations.

Question: In classic mode if you are NOT moving and hiding behind a box, if a merc comes in the room to do a sweep, will their motion pick you up if they get close to you? =p Or can you remain undetected and let them pass by if they dont see you.

Answer: So the one thing we’ve got (that you hopefully picked up in the trailer) is called SHADOW BLEND. In CLASSIC, if a Spy is hiding in the shadow, he will basically become invisible. Obviously, the Merc’s flashlight can counter that… but it definitely adds some tension to both sides! As far as the motion detector… I’m checking my notes, which reveal: “Intermittent pulse detects fast enemy movement” Hope that helps!

Question: Sorry for all the questions zack, but will there be more game modes then the two ye have already mentioned , I know u can’t probably talk about them but can we expect other alternatives to the two you have mentioned ? Thanks.

Question: Could you please tell us about the inventory system and gadgets available in Classic SvM? How many are we allowed to carry? What gadgets are there? Are there spy cams? Chaff/flash/smoke? Heartbeat detector? What vision modes do the Spies have? What about the Mercs? Is the Karambit in Classic mode?

Answer: Ahh… you want to get INTO IT, eh? OK… In CLASSIC… Spies get NVG (Night Vision Goggles) + 2 Gadgets. Mercs get their Flashlight and 2 Gadgets. In BLACKLIST… there are 3 vision modes for each the Spy and the Merc to choose from (they’re different from each other), and there are 5 gadgets that you can choose from (but the number is determined by your armour parts, I believe)

Answer: Smarts and skill are the two biggest factors, and will always trump a loadout, no matter how much you’ve spent to unlock gadgets. You can unlock them in any order… or simply use the presets that we’ve set out for you. Those presets are:

Disruptor – Disrupt enemy electronics
Hunter – Has a wicked awesome drone to tag or eliminate enemy Spies
PeaceMaker – has an adrenaline shot that basically turns him into a tank (moves faster, can take more damage, heightened field of view… CRAZY)

Question: Will the maps in ‘classic’ mode and ‘blacklist’ mode be the same environments but smaller or completely unique maps for each mode due to the addition of more players in ‘blacklist’ mode?

Answer: They’re the same environments, but lit differently… CLASSIC *very much* pushes the light and shadow… it brings the tension of cat & mouse/hide & seek with the darkness and the flashlight.

Question: What gadgets do the spies have to choose from in Classic? A variety, I’m sure, but will it be a cornucopia of grenades? Perhaps a terrific gaggle of tech gadgets?

Question: Also, how does the hacking work? Wireless? Or is it more classic?

Answer: There are zones for each hacking station… you need to get right up to the station to initiate the process, and then remain alive and in the zone for the hacking to continue. If the hacker dies, a teammate has X amount of time to get to the station to resume it. If they fail to do so, the transfer of data is reset.

Naughty Dog: The Last of Us Multiplayer Will Be “Very Fun!”

UK Retailer ShopTo Will Not Stock Call of Duty: Ghosts Due to Conflict With Activision Policy