While we already have our Star Wars Battlefront II beta impressions piece, it mostly talked about the infantry-centric modes, and how it played. For this hands-on impression piece, we’re focusing on Battlefront II’s space battles mode, Starfighter Assault.

Bit of a disclaimer from me: I never really like dogfighting in games much. Sure, I played them, but if I had a choice between infantry and space/jet combat? I’d choose the former every time. Now that’s out of the way, here’s the big kicker: I absolutely loved Starfighter Assault. I wasn’t particularly super good at it, nor can I control my spacecraft with pinpoint precision, but man, did I enjoyed the time I had — especially as the Imperials.

In the Star Wars Battlefront II beta, Starfighter Assault mode had three ships to choose from: there’s the X-Wing, which was your standard assault vehicle with rapid fire lasers; the Interceptor, which was more of a one-on-one specialist; and the Bomber, a heavy-hitting craft that either slowed down a targeted enemy ship (for the Rebels), or fired off three missiles that can lock on to multiple targets (Imperials). Each “side” (Rebels and Imperials) had their own version of each craft though with slight variance in each.

What was surprising to me was, each vehicle felt really different, and that was pretty much evident with the abilities, and the laser sound each vehicle made (more on that later). So far, my favorite of the three is the Bomber ship, since it meant you can support your teammates in taking out Hero ships or pesky pilots by slowing them down (as the Rebel Bomber), or targeting multiple enemy ships as the Imperial Bomber. It’s so satisfying taking out a vehicle by bombarding them with missiles and watching things blow up.

Adding to each spaceship’s abilities are Star Cards that acts as buffs for offensive or defensive abilities, or gives players ability boosts such as their main weapons taking longer to overheat, faster lock-ons and more. It would be awesome to have the ability to put a skin over your own vehicle, but it doesn’t seem to be an option that’s available — at least in the beta.

I can’t, for the life of me, pilot a chopper or jet in DICE’s Battlefield games. Call me a noob, idiot, or whatever, but I just can’t. Imagine my surprise when I found the controls in Starfighter Assault easy to adapt, but a tad harder to master. After a few matches I was weaving and flying through structures, painting enemy spacecrafts and more.

One cool objective had you flying in the trenches of a space structure where you had to take out multiple targets inside. Imagine having to maneuver that and have to contend with enemy fighters on your tail trying you laser your ass down! It’s definitely one of those I-can’t-believe-I’m-really-doing-this moments that needs to be experienced firsthand.

Aiding in that movie-like chase downs are the simple controls where the left stick handles the acceleration and deceleration, with the right stick making your craft roll, Weapons are fired by L1, R1 and L1+R1 which means you’re hands are always ready to fire when ready.

While some people might scoff at making the controls super simple, I’m all for it. It’s hard enough fighting with enemy spaceships, don’t let the player wrestle with the controls, too. 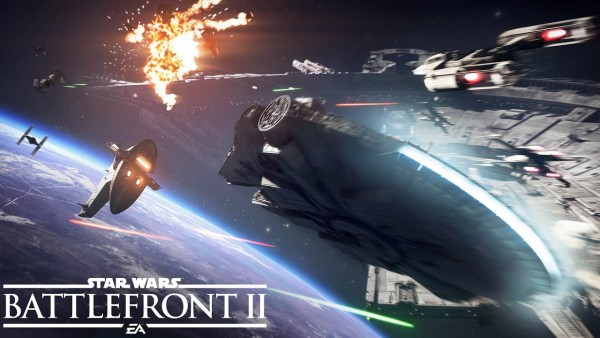 Of course, it won’t be a Star Wars dogfight without the universe’s legendary ships. In the beta, we have access to Han Solo’s Millenium Falcon, Bobba Fett’s Slave-1, Darth Maul’s Scimitar and a modified X-Wing. Out of the lot, Bobba Fett’s craft is easily my favorite and if I’m being honest, feels a tad overpowered. Its ultimate ability is leaving a bomb area of attack that damages and stuns those who are tailing you. Sure, the wind up takes a second or two, and there’s no way to lose enemies targeting you, but the damage capabilities of Fett’s ship easily outclasses those of the Millenium Falcon and the rest.

Controlling the hero spacecrafts give off a sense of power, which is emphasized by the ship-specific voice overs. Piloting the Falcon? Prepare to hear Chewbacca and Han Solo spew out some quips that should be appreciated by Star Wars fans.

Fortunately, the Hero vehicles aren’t too overpowered — at least from what I’ve experienced so far. Sure, they can take away a few ships, but if a few regular spaceships are coordinate in taking it down, it should go down given the self-repairing gameplay mechanic doesn’t kick in immediately when no one is shooting.

Based on what I’ve played of Starfighter Assault in the Battlefront II beta, DICE and Criterion have nailed the mode down. If you ever wanted to pilot an X-Wing or drop goons while piloting the Millenimum Falcon, then your dreams are one step closer to reality. Simply put, if a non-genre fan like me can be swayed by what I’ve played, imagine what it’ll do to those who are huge fans of Star Wars and flight sims or space battles.

Let’s hope that the Hero vehicles we’ve yet to see live up to the rest that was showcased in the beta. Other than that, maybe a way to customize ships (though not too much), and I can see myself getting lost in the vast oceans of the galaxy.

Will what was shown in the beta have enough depth to have would-be pilots coming back after the initial thrill has worn off? How will the other maps differ from the rest? There’s lots of questions left, but so far so good, DICE and Criterion are on the right trajectory when it comes to bringing the thrills Star Wars Battlefront II’s space battles, and I for one, am excited to jump back into the cockpit once again come this November 17 when the game ships for the PS4, Xbox One and PC.