Check out the top 50-41 fighters from UFC 4 below. Note that male and female fighters are grouped in the same list. 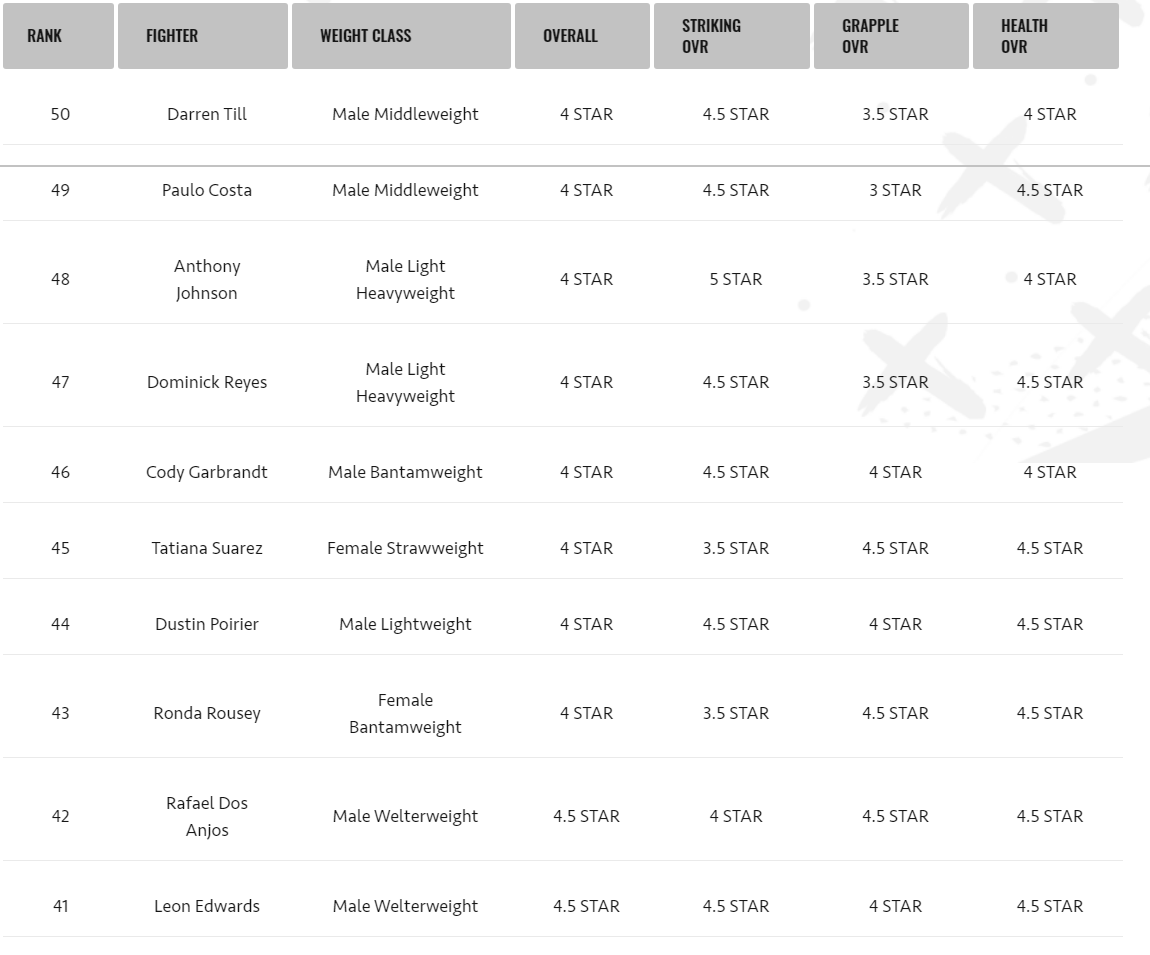 Curious what the stars are and how it works? EA has detailed UFC 4’s star system.

In addition to the overall star rating, each fighter will also have a star rating for their stand up, ground game, health, and moves. This change will allow players to quickly observe and determine a fighter’s strengths and weaknesses in specific areas, without focusing on a single numerical OVR. This allows for a better assortment of fighters when playing online or against friends on the couch. For returning users and advanced players, you can examine a fighter’s individual attribute values as numbers. This will help you determine who has the highest punch power or highest kick speed in each division and allow comparisons of individual attributes on each fighter.

In UFC 4, there are new attributes that comprise a fighter’s overall effectiveness. Here’s an explanation of it:

We have expanded the attribute system to accommodate new gameplay features as well as allow for a more realistic representation of diverse fighting styles that can be seen in the UFC. Here are the new attributes:

There’s now a “Top 5 Moves” for each fighter as well. These can be viewed on the select screen, and use this knowledge to know how to play as that fighter, and how to counter them as well.

The top 5 moves for each fighter will be viewable on fighter select screens. Players will be able to view which moves each fighter specializes in or has the highest move level for. You can also view the inputs required to use those moves during gameplay. This allows for insight on your opponent’s moves as well.

One interesting new feature announced today are the “Live Attribute and Move” updates. Essentially, after a fighter’s match, the dev team will release a fighter update with new attributes and move updates! If implemented properly, this could be game-changing for MMA video game fans.

In UFC 4, we designed the attribute system to be much more organic and allow fighters to improve/decline through in-game updates depending on the results of their performance in the real world. Following major UFC events, a fighter update will be released on UFC 4 with the new attribute and move updates for fighters.

Stay tuned for next UFC 4 fighter ratings list! EA says they’ll be rolling these out in a span of 10 days.

UFC 4 will punch its way out this August 14 on the PS4 and Xbox One.

Anthem Armor List – Every Armor Released Compiled in One Place