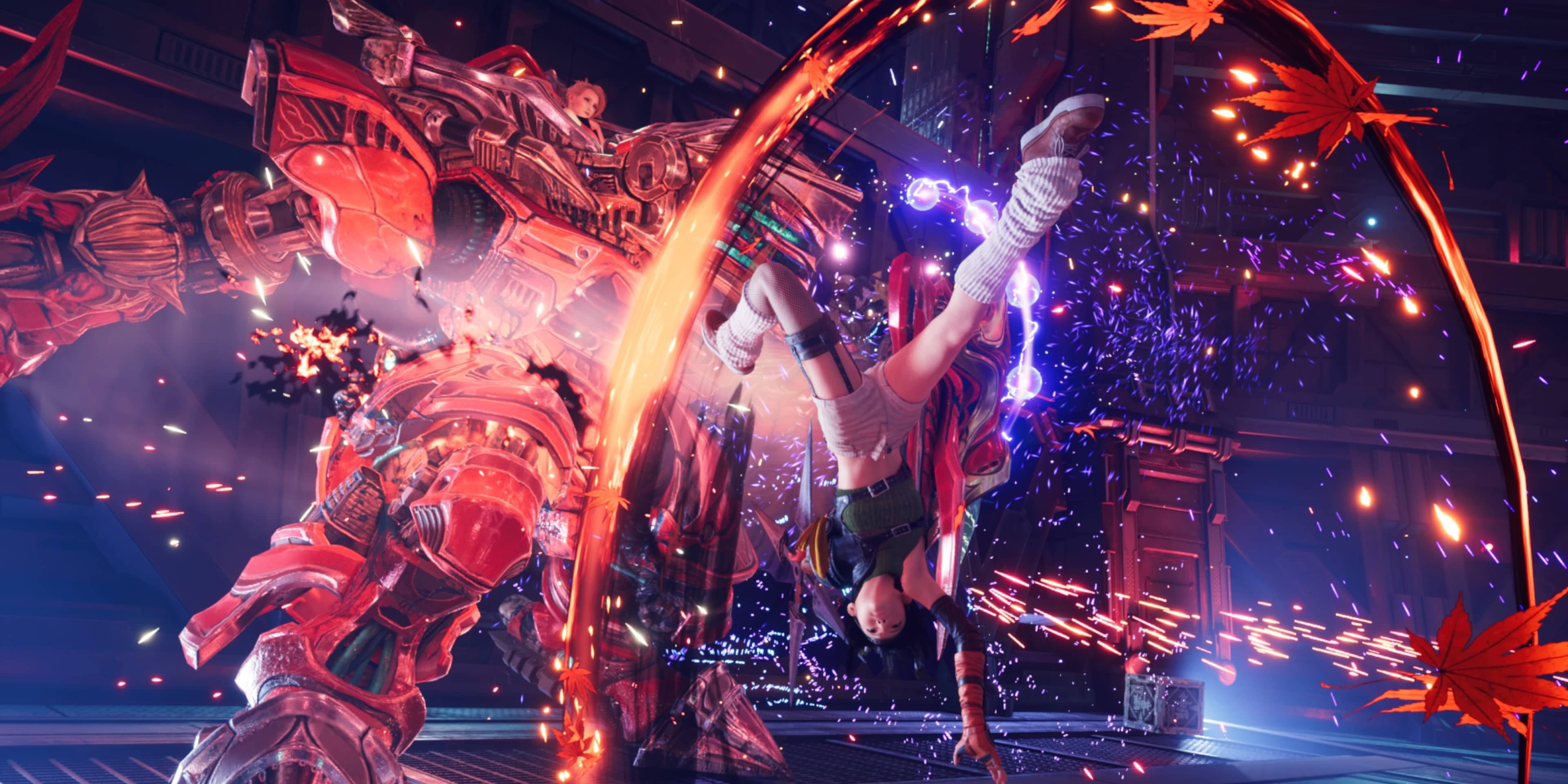 Ever since its surprise announcement in 2015, fans have waited patiently for the Final Fantasy 7 Remake. When it was released in April 2020, it was everything we ever asked for, and more — a chance for old fans to relive a beloved classic in a brand new light and an opportunity for new players to experience one of the best stories in history.

While the news of Square Enix splitting Remake into multiple parts wasn’t taken lightly, it might’ve been the right move in the long run. The decision to split it up resulted in a more in-depth story with brand new characters. Players got to experience Midgar in ways never thought possible. Final Fantasy 7 Remake received tremendous praise when it was released, so it’s no surprise that the INTERmission DLC is a perfect addition to the game. Want to know why? Read on for our Final Fantasy 7 Remake INTERmission review! 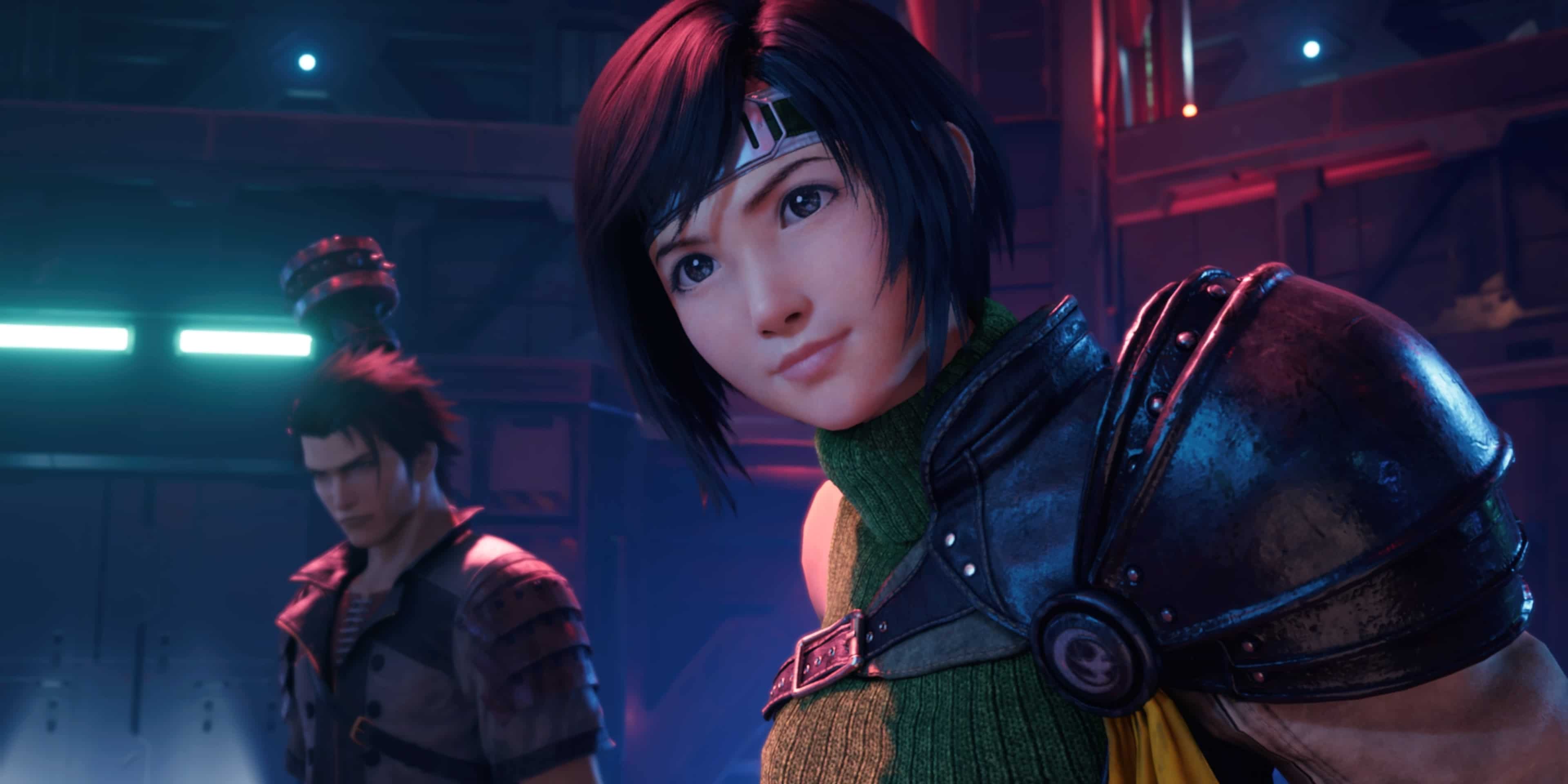 The INTERmission DLC follows Wutai’s best Materia hunter, Yuffie Kisaragi. Sent by her country’s government, Yuffie is tasked with infiltrating Shinra headquarters and stealing “ultimate Materia.” After emerging from the opposite side of Scrap Boulevard, much to the surprise of on-duty guards, Yuffie finds herself in Sector 7. The young ninja meets up with members of Avalanche, the activist group dedicated to protecting the planet and taking down Shinra. Wutai’s advanced scout, Sonon, has already started gathering intel around Midgar days before Yuffie arrived. Once Sonon returns to Sector 7 and meets up with Yuffie, it’s all systems go on the Wutai Materia heist.

Yuffie’s story is perfectly woven in the larger narrative of Final Fantasy 7 Remake. Her arrival in Sector 7 lines up right after the destruction of Mako Reactor 5 and Cloud falling into the slums. While Yuffie, obviously, doesn’t interact with Barret or Tifa, she does see them talking in front of the Seventh Heaven bar. It was revealed in Final Fantasy 7 Remake that Barret, Tifa, Jessie, Wedge, and Biggs are part of a separate branch from a much-bigger Avalanche. INTERmission doubles down, explaining that these members are known as the Splinter Group. It’s unsurprising as Barret has repeatedly stated the difference in ideologies between himself and other members of the activist group.

The Whispers never make a defiant appearance, but their presence is still felt. After Barret enters the bar and Tifa runs off to investigate Don Corneo, Yuffie can attempt to enter the bar. She’s stopped by an invisible force and pushed backward, similar to how the Whispers prevented Cloud and many others from deviating off Destiny’s path. Trying to bust her way into the bar is the only time the Whispers prevent Yuffie from going, so it’s safe to assume that everything that transpires during INTERmission happened in the original game.

All Fun and Games 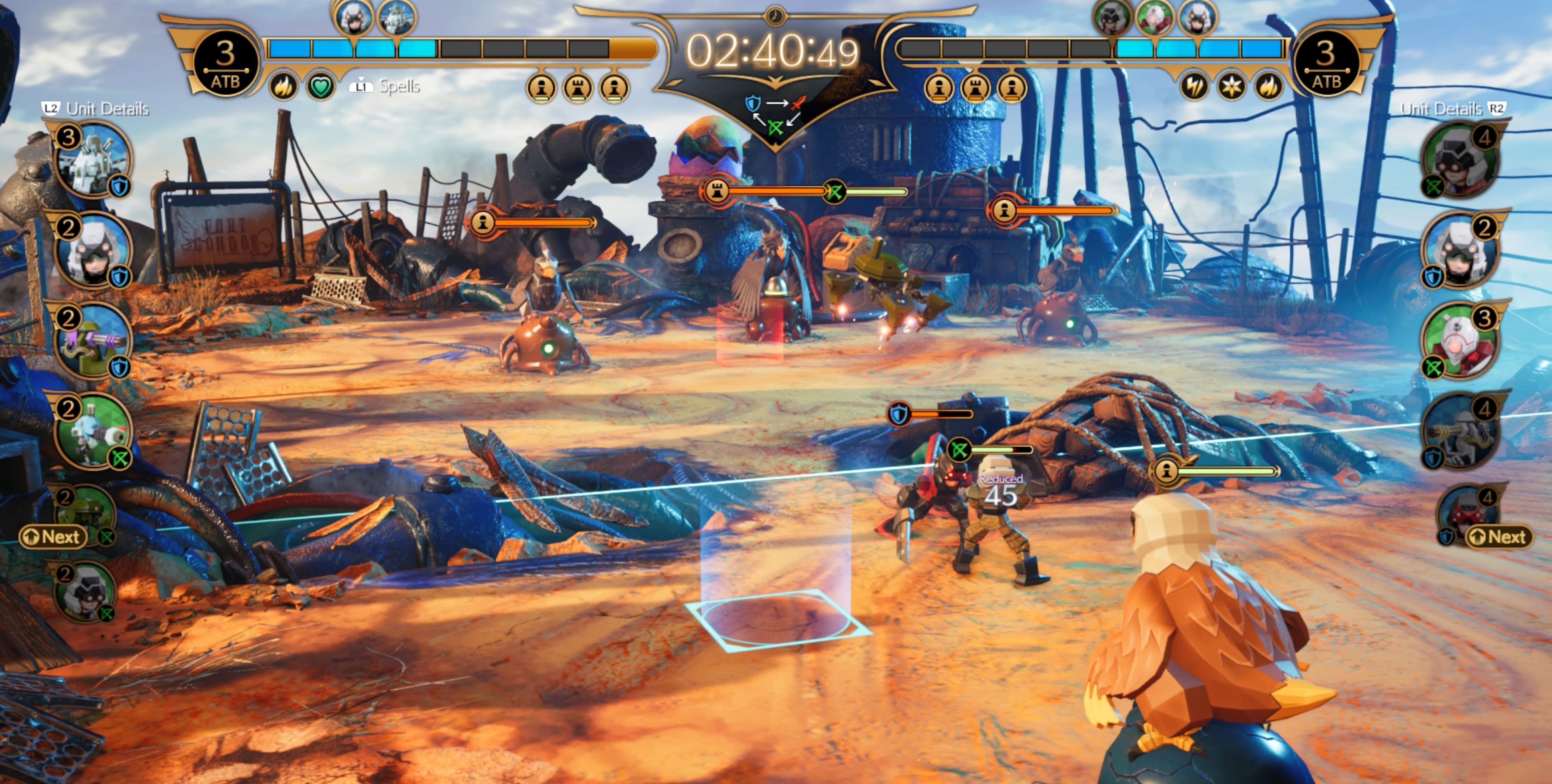 After speaking with the members of Avalanche, Yuffie has time to kill waiting for Sonon. INTERmission introduces a new mini-game, a scavenger hunt, and the return of a certain Shinra intern. Yuffie meets an older Wutaian named Old Snapper, who runs a bar called Happy Turtle in Midgar. He tells Yuffie there are six Happy Turtle posters scattered around Sector 7, and collecting all of them will earn Gil and prizes. Although Old Snapper gives Yuffie tips on where to find each poster, they’re borderline terrible. Instead of following his jibber-jabber, follow the Happy Turtles music. As the music grows louder, the closer Yuffie is to a poster.

Old Snapper also teaches Yuffie about the highly popular game, Fort Condor. What some might’ve said was a chore in the 1997 version, the Fort Condor game is arguably the best area of improvement so far. In the original, it was difficult to fully understand if your squad was winning and simply trying to will yourself to victory. Fort Condor in INTERmission is presented as a board game with each side having three towers. There are three types of units: Vanguard, Range, and Defense, with each type of unit being the weakness and strength against another. Old Snapper tells Yuffie there is a grandmaster of Fort Condor and she can win even more rewards by defeating him. As Yuffie defeats more people in Fort Condor, she’ll have the ability to adjust the types of units to use. Each defeated opponent will also give Yuffie Condor Coins to use as currency with Old Snapper. Condor Coins are similar in nature to Moogle Medals in the base game. 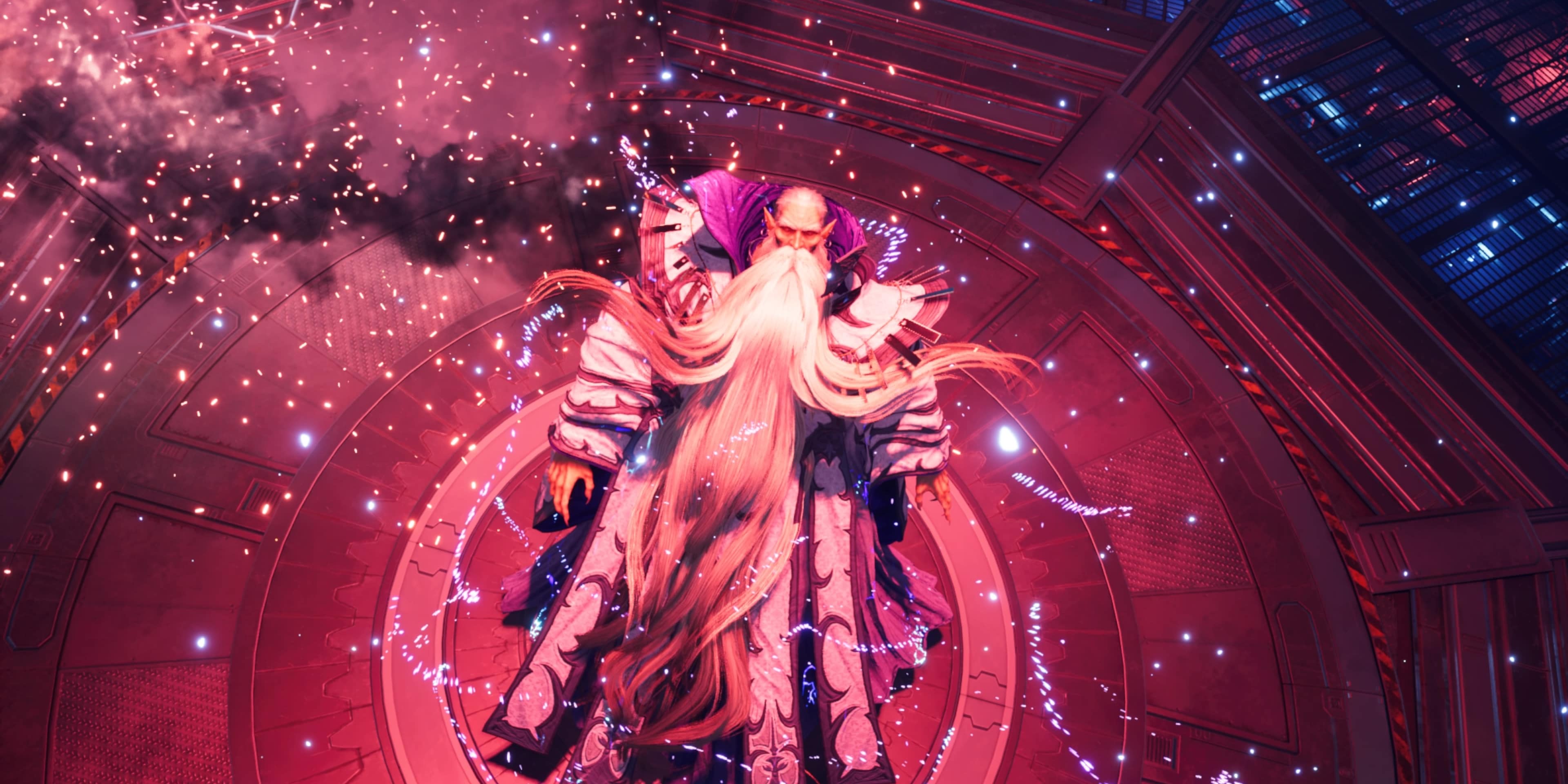 Other than finding posters and playing Fort Condor, Avalanche tells Yuffie about speaking with Chadley. Standing in the same area in Sector 7 as Final Fantasy 7 Remake, Chadley is hard at work analyzing combat data and creating new materia. While Cloud is away, Chadley asks for Yuffie’s assistance in defeating the Ramuh summon. It’s highly recommended to wait until Sonon joins the party before attempting to battle the lightning summon. Having Sonon available as a potential meat shield is key in surviving against Ramuh’s paralyzing lightning bolts. Players won’t be able to speak with Chadley immediately after Sonon joins with Yuffie, but there will be an opportunity after the forced main objective. 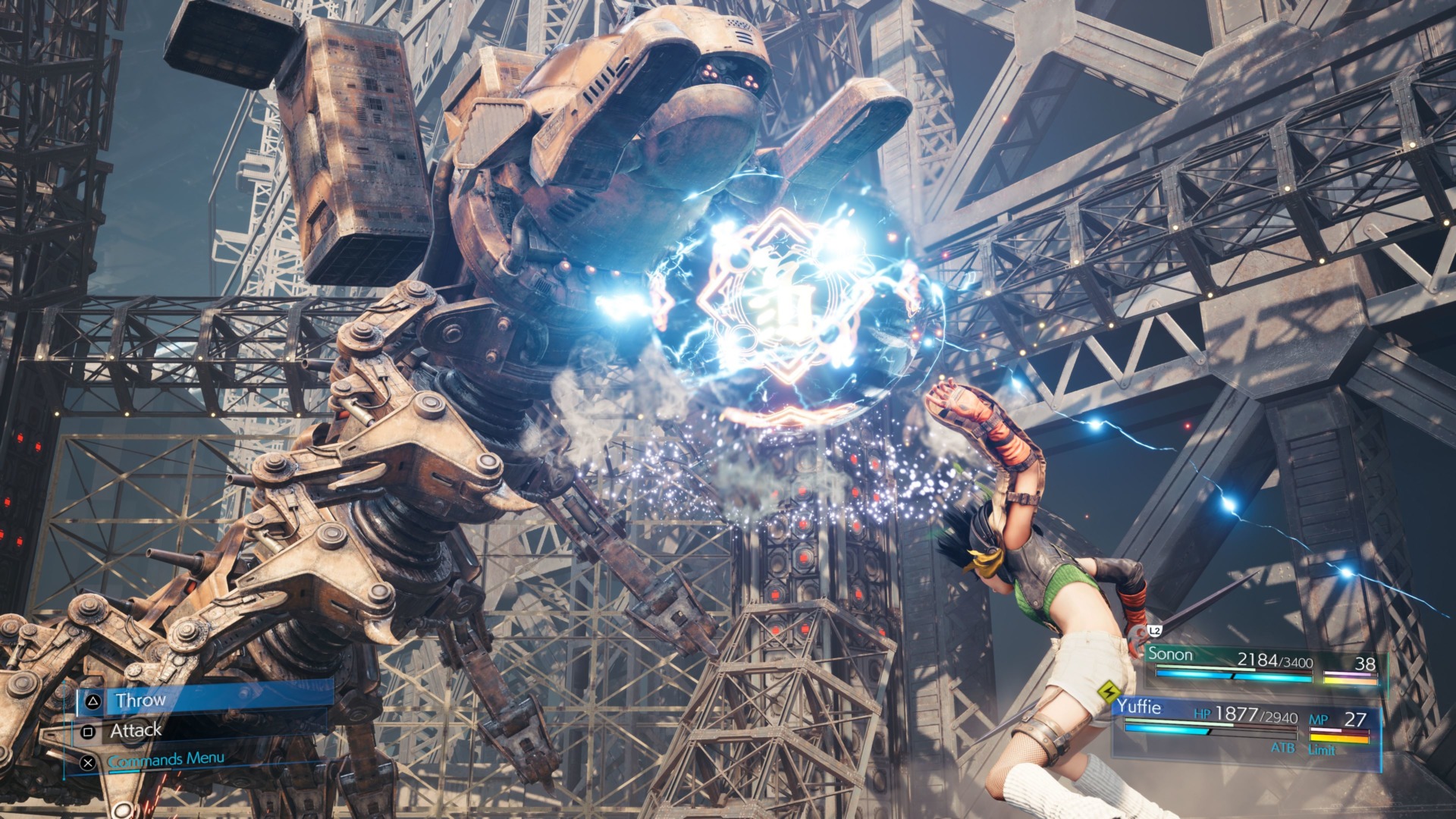 Essentially, INTERmission’s combat is the same as Remake’s, except for a few minor adjustments. Unlike Remake, players cannot control every member of the party, which means, Sonon is off-limits. Players still have the ability to select an ability, spell, or item for Sonon to use on his turn, but won’t be able to physically control him. Yuffie’s combat style is unique because she can be effective from both short and long-range. Yuffie can throw her shuriken at an enemy, and then use a ninjutsu spell for additional long-range attacks. These spells deal elemental damage that Yuffie can change through her abilities. While it’s smart to be aware of the team’s health, Sonon will automatically heal himself, or Yuffie, if either falls dangerously low. On top of that, if Yuffie falls unconscious in battle, Sonon will sacrifice his remaining life force to revive Yuffie. What a great guy.

INTERmission adds a new combat feature called Synergy. When activated, Sonon appears beside Yuffie, and the two become synergized. Sonon targets the enemy that Yuffie is fighting and will perform the same combat moves too. This technique works well when there’s either one enemy or wanting to systematically target an enemy to pick them off in a group. Both Yuffie and Sonon have two additional weapons to be found in INTERmission. 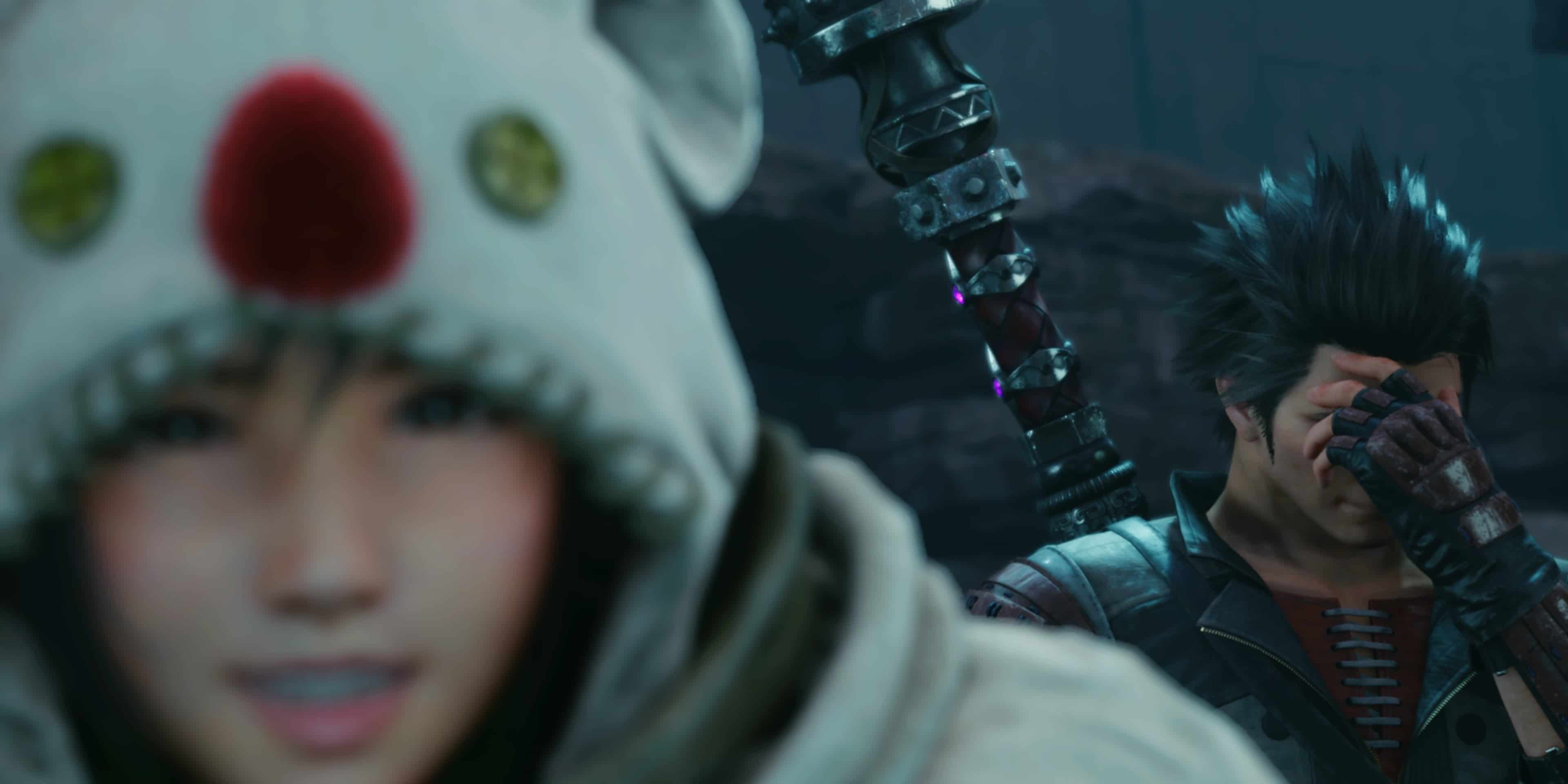 The INTERmission DLC is a perfect send-off for the City of Mako. Narratively, the events of INTERmission link up perfectly with Remake, while providing new, noteworthy content. Yuffie’s character and story in the original were some of the most memorable moments in the game, so seeing her get her chance in the spotlight is much deserved. For players who did not purchase Final Fantasy 7 Remake, Intergrade is the definitive edition to experience this adventure. Not to be confused with the INTERmission DLC, Intergrade contains the next-gen version of Final Fantasy 7 Remake and the INTERmission DLC. Much of the story remains the same, however, there is an extended ending that will leave fans wishing for the second part. More importantly, Intergrade fixes the texture on doors that became a hot debate topic last year.

One of the benefits of Square Enix splitting Remake into multiple pieces is for times like this. Instead of her one-dimensional outlook of needing material that was hyper-focused on in the original, the character of Yuffie is introduced in a much more nuanced way. Yes, Yuffie is still obsessed with materia, but it’s to protect Wutai against Shinra. Learning more about the Shinra-Wutai conflict adds more depth to her character and the trials she’s been through up until this moment. The combat is flawless, with the only downside being not able to control Sonon. Shinra keeps the variety of enemies aplenty, and battles aren’t too easy or difficult. Fort Condor remains one of the best things that’s come out of this remake and must implore players to not brush it aside. Ultimately, INTERmission wraps up the chapter of Midgar and perfectly sets up the second part of this incredible experience.

A review code for Final Fantasy 7 Remake INTERmission was provided by the publisher and played on PS5. You can read SP1st and MP1st’s review and scoring policy right here.