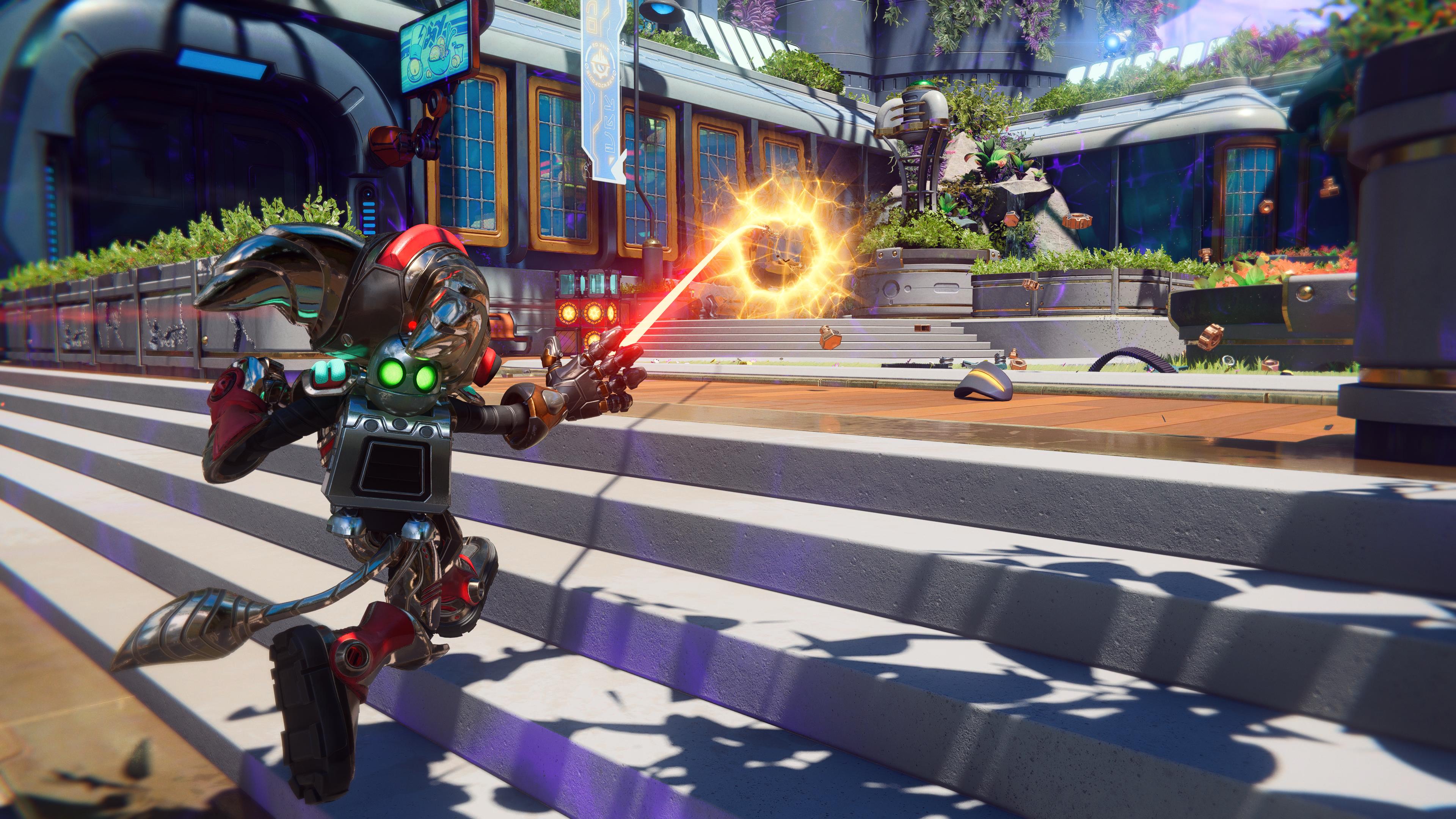 For over a year we have been hearing about the power of the PS5’s custom SSD, and DualSense controller, and how they’re going to be game changers for how games are designed and interacted with. And while we’ve seen some examples of how it has made some experiences better such as the insanely fast load times (which is especially welcome on games like Demon’s Souls and Returnal) and we’ve felt the excellent haptics and adaptive triggers in games like Astro’s Playroom, we have yet to really see just how much the SSD will impact game design.

That is until now. Ratchet & Clank: Rift Apart demonstrates exactly how it can be used to change gameplay design and while I think it only scratches the surface, the results are pretty spectacular. That it has a pretty good story and introduced me to one of my favorite PlayStation characters in their storied history makes it one the best first year exclusives I’ve ever played on any console. 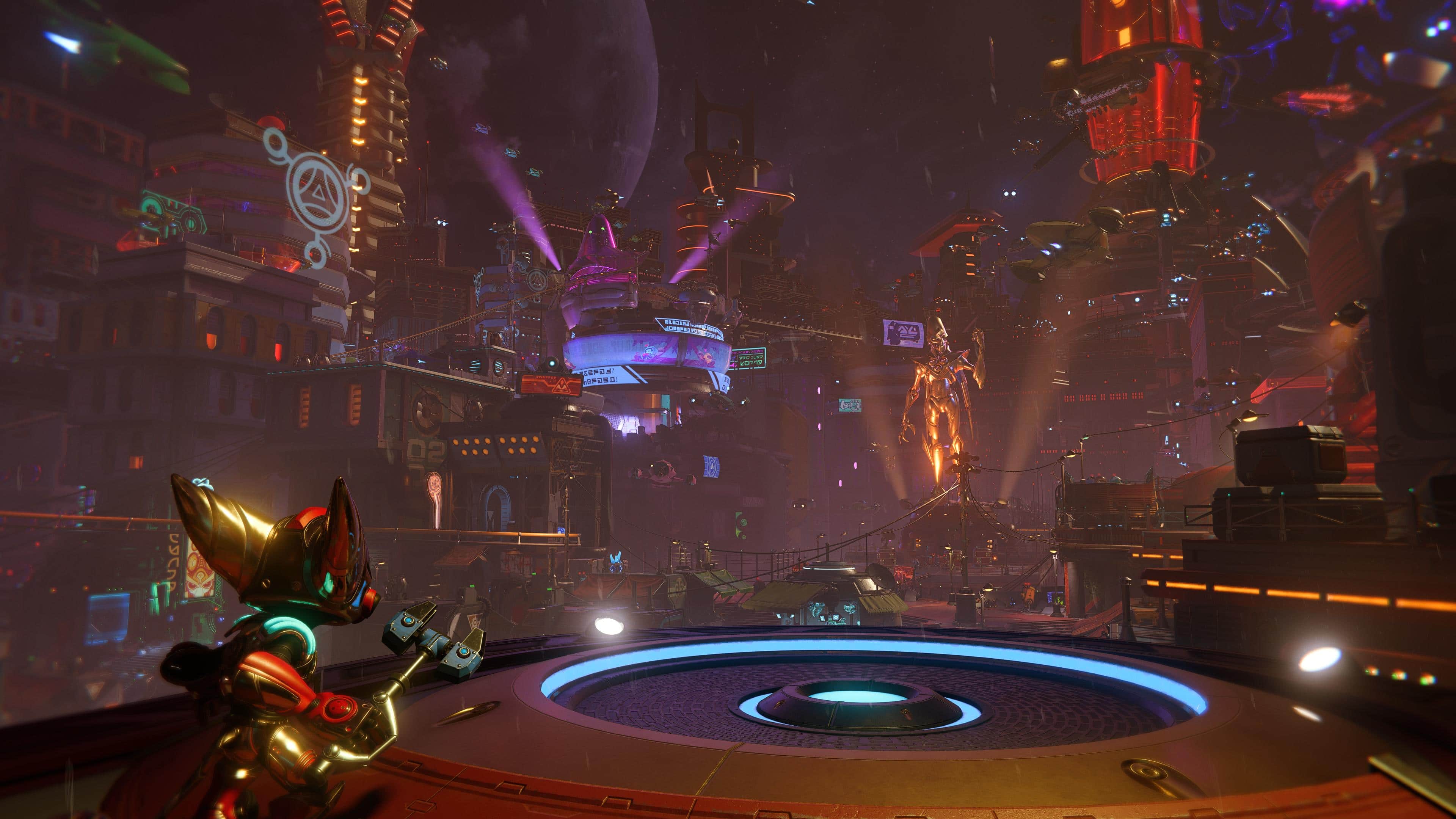 Out With the Old, In With the New

The story begins with Ratchet and Clank having “retired” from being heroes because their dimension hasn’t needed saving. They’re being honored with a parade, Clank surprises Ratchet with a new Dimensionator for Ratchet to use to get back to his dimension and his Lombax people. Of course Doctor Nefarious, Ratchet’s long time arch nemesis, attempts to steal it, and in the ensuing battle. the Dimensionator is destroyed, causing dimensional rifts all over the galaxy. Ratchet and Clank are dimensionally displaced and separated. Clank is picked by female Lombax, Rivet and Ratchet gives chase thus starting the adventure.

It should be stated that while the main story is easy to follow for newcomers, the more you know about the franchise, the previous existing characters and their histories the more enriching the story will be. For me, most of the humor fell flat. It’s just not my kind of humor, by and large. That being said, it’s a genuinely good story, made even more so by Rivet. Voiced by Jennifer Hale, Rivet is spunky, fun, tough, sweet and almost immediately endearing. She’s such a great character that I actually came away from this game liking her much more than Ratchet and I’m hoping either the franchise continues with her or she gets her own series. There’s another character I won’t spoil here because they’re also a great addition and bring a lot to the story as well. Their stories intervene and are really the heart and soul of the game, and I cared deeply about them long before I reached the end of Rift Apart.

We Have Such Sights to Show You

The story gets a lot of help from the presentation. Insomniac have stepped up their animation game and this rivals anything I’ve seen from recent Pixar productions. I know it’s cliché and we’ve been hearing that since the PS2 era, but here it’s genuinely true. Aided by the horsepower of the PS5, everything about the presentation is stellar. From the lighting, to the textures, to the ray tracing, all of it brings the world to such vibrant life and a delight to my eyeballs.

The visual splendor isn’t reserved for the cutscenes. Each of the nine worlds you’ll visit is rich with detail and the same visual beauty, texture and graphical splendor. It’s truly one of the best looking games I’ve ever seen. 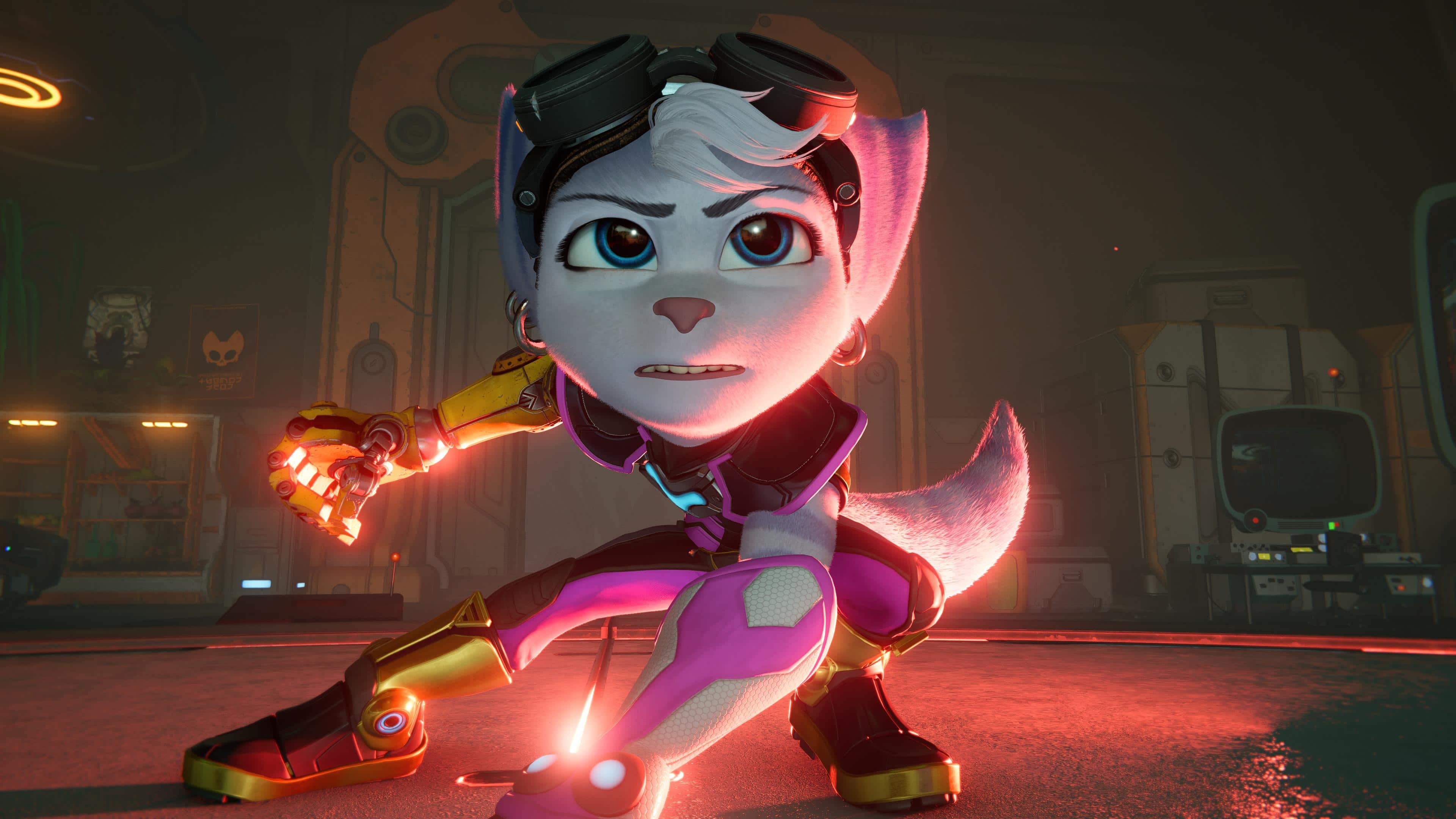 If you’re familiar with the core gameplay of the Ratchet and Clank games, you’ll find a lot to be the same. There’s the wild variety of weapons, some hilarious like a glove upgrade called the Glove of Doom that drops a crew of Agents of Doom that gang up and pummel enemies. There’s also the new Topiary Sprinkler that plants in the ground and sprays water at enemies, turning them into shrubs that immobilize them, making them easy targets for a limited duration. There are 16 weapons in all, and they all can’t be purchased until near the start of Challenge Mode, which is basically NG+ where everything except some traversal upgrades carry over. You can also purchase “Omega” versions of some weapons to upgrade even further in this mode.

Since ammo is limited, depending on weapon type, I found myself using about eight core weapons and switching between them. These weapons tended to fit my play style best but I did dabble in all of the weapons in order to determine which ones I liked best. To upgrade you need Raritanium which are blue crystals that are located around the map. Some are well-hidden or off the beaten path so I found myself searching everywhere for them just so I could make my weapons more powerful. The more you use a weapon the faster it will level up, unlocking more upgrades to be purchased. 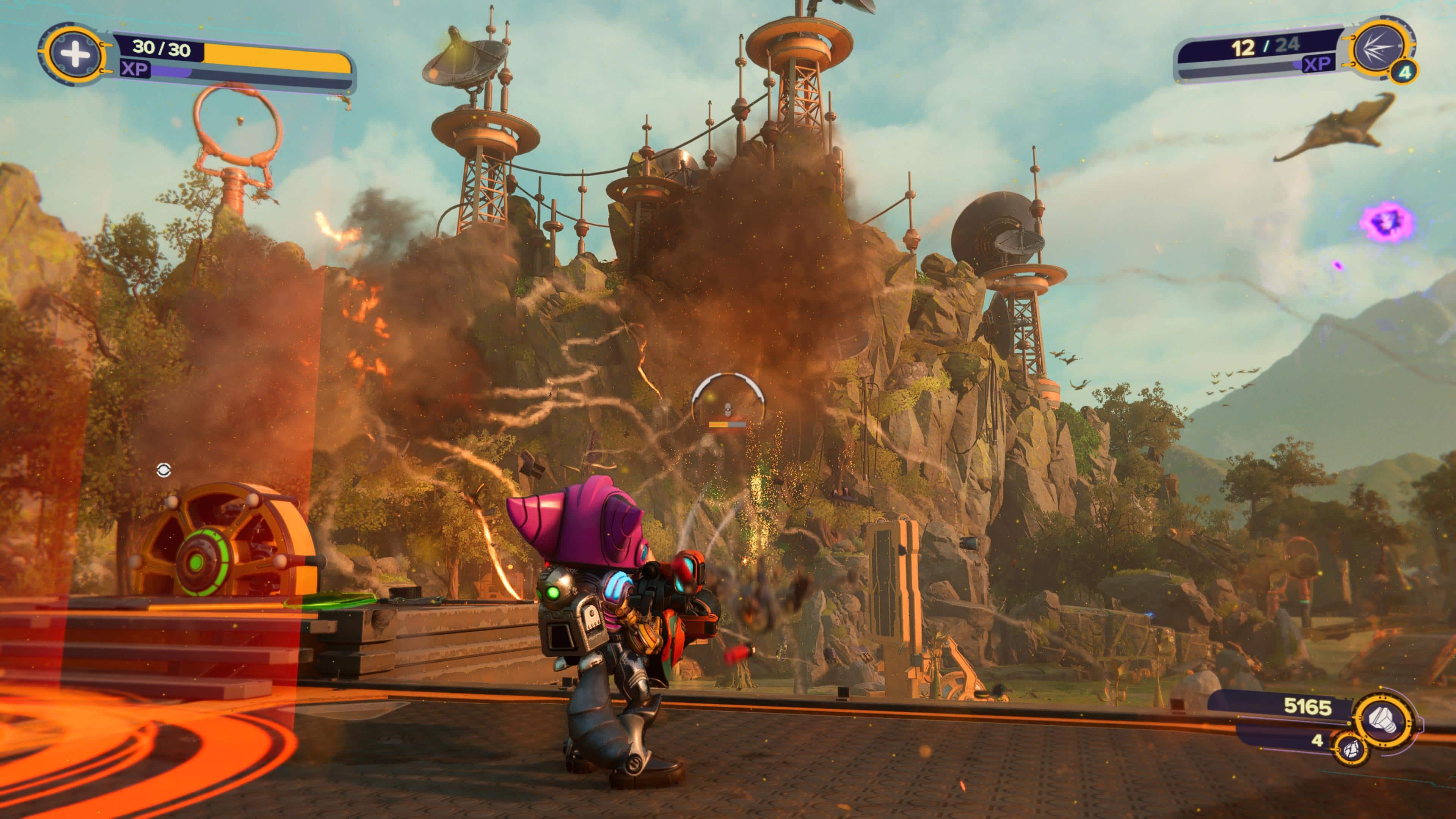 Again, all of this is old hat for the Ratchet and Clank games but it’s worth stating for any newcomers that will surely buy this as a showpiece for the PS5. So what is new about the gameplay? First there are new upgrades for traversal. The most notable and welcome are the booster boots that let you move much faster across levels. Holding the R1 button will propel you, but tapping L2 a few times in a row will kick in an almost nitro boost-like feature which makes you significantly faster. Thankfully this is unlimited, and once you get the boots it made cleaning up collectables and further exploration much more pleasant.

They have also added two recurring puzzle sections of the game where Clank has to navigate possible versions of himself like lemmings through hazards and platforms using different orbs that power specific plates with either speed making the possibilities move faster when they pass through, a feature orb that makes them float forward over gaps and hazards, a heavy orb that allows them to withstand high speed fans that can normally blow them off of platforms and an electricity orb that lets them pass through wires as a current. Once on the other side of the room the possibilities power a door to move forward.

Then there are sections where Ratchet has to use Glitch, a character that goes inside of corrupted computers and destroys viruses. There are only five or six sections like this, and despite Glitch being a cute character and kind of having her own little story in these sections, they’re easily the weakest aspect of the game. 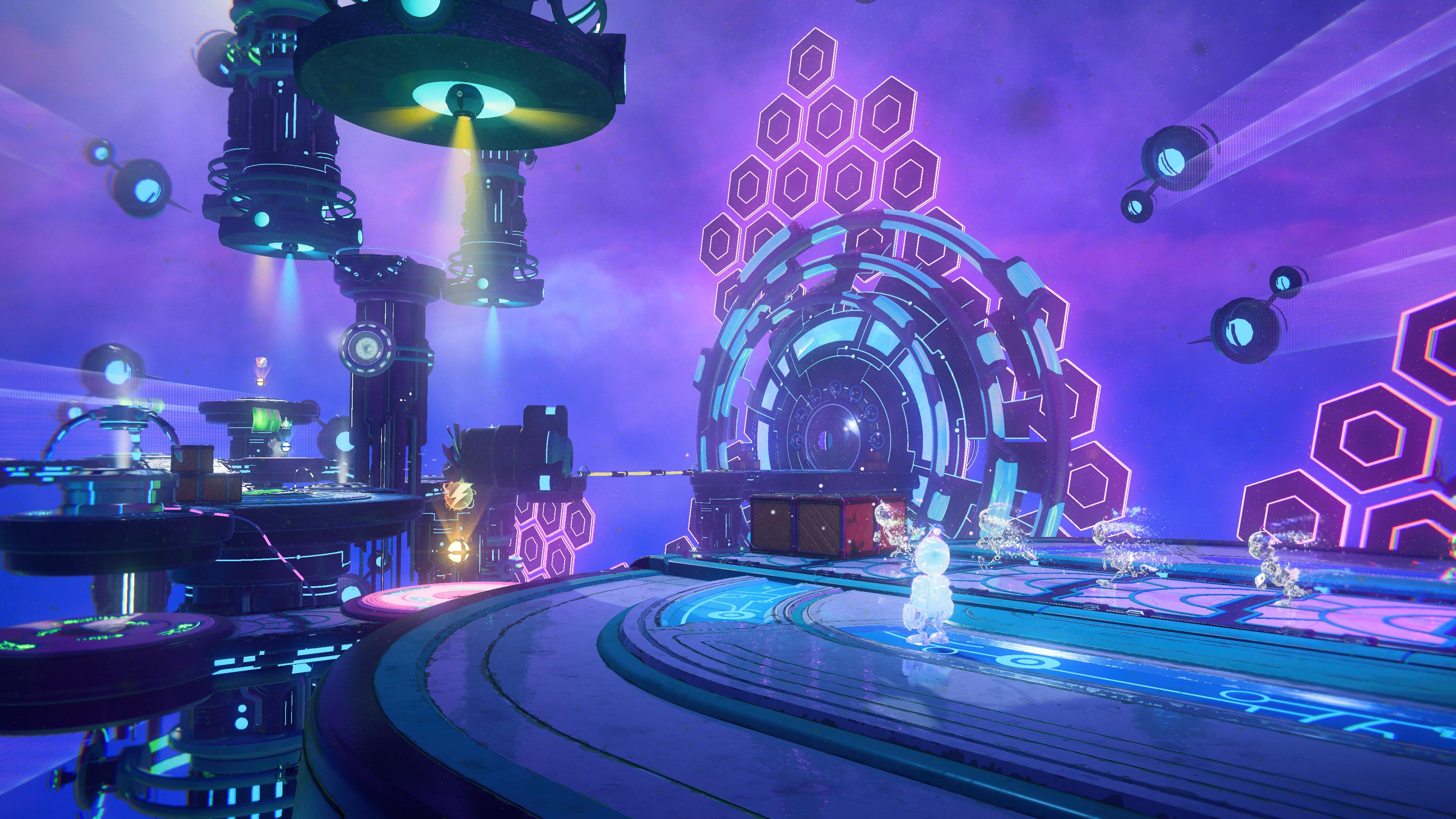 The biggest upgrade and change to the gameplay comes from how Insomniac uses the SSD. Unless you’ve been living under a rock, the SSD is being used for dimensional shifts in all manner of ways. There are rift tears that you can tether to by pressing L1, and it will pull you instantly to another area in the area which makes for varied combat situations as well as traversal for collectables and hidden items. There are also dimensional pockets that are found in the world in specific areas that feature various platforming sections in order to reach new pieces of armor (that give specific but various buffs). Lastly, there are a few levels where hitting a dimension shift crystal will change the environment in order to progress through the level. While this may seem familiar to anyone who played Titanfall 2 (if you haven’t, what are you waiting for) where there is a level in the game that allows you to shift through two timeframes that changes the room you’re in. But unlike Titanfall 2, where the map is exactly the same, just painted differently and with environmental hazards to get past, in Rift Apart, it changes the area completely. For example, in one instance, I entered a room that is closed off. Hitting the shift crystal changes the environment to a destroyed version, that I had to navigate to get to the other side of the door. There was another shift crystal waiting there so I hit it and could see of the same sealed door, only I was now past it.

I should say that while this is most certainly impressive, it’s not quite the mind-blowing experience I had expected based on what I was sold. Since it’s extremely linear it’s easy to understand that the SSD is allowing the two areas specific to that section of the game to be loaded instantly. It’s a neat trick for sure, but it’s clear this is only scratching the surface of what can be done in the future. I would like to imagine being able to freely travel between two worlds for more than just specific sections. Until that pie in the sky time happens, this is good holdover. 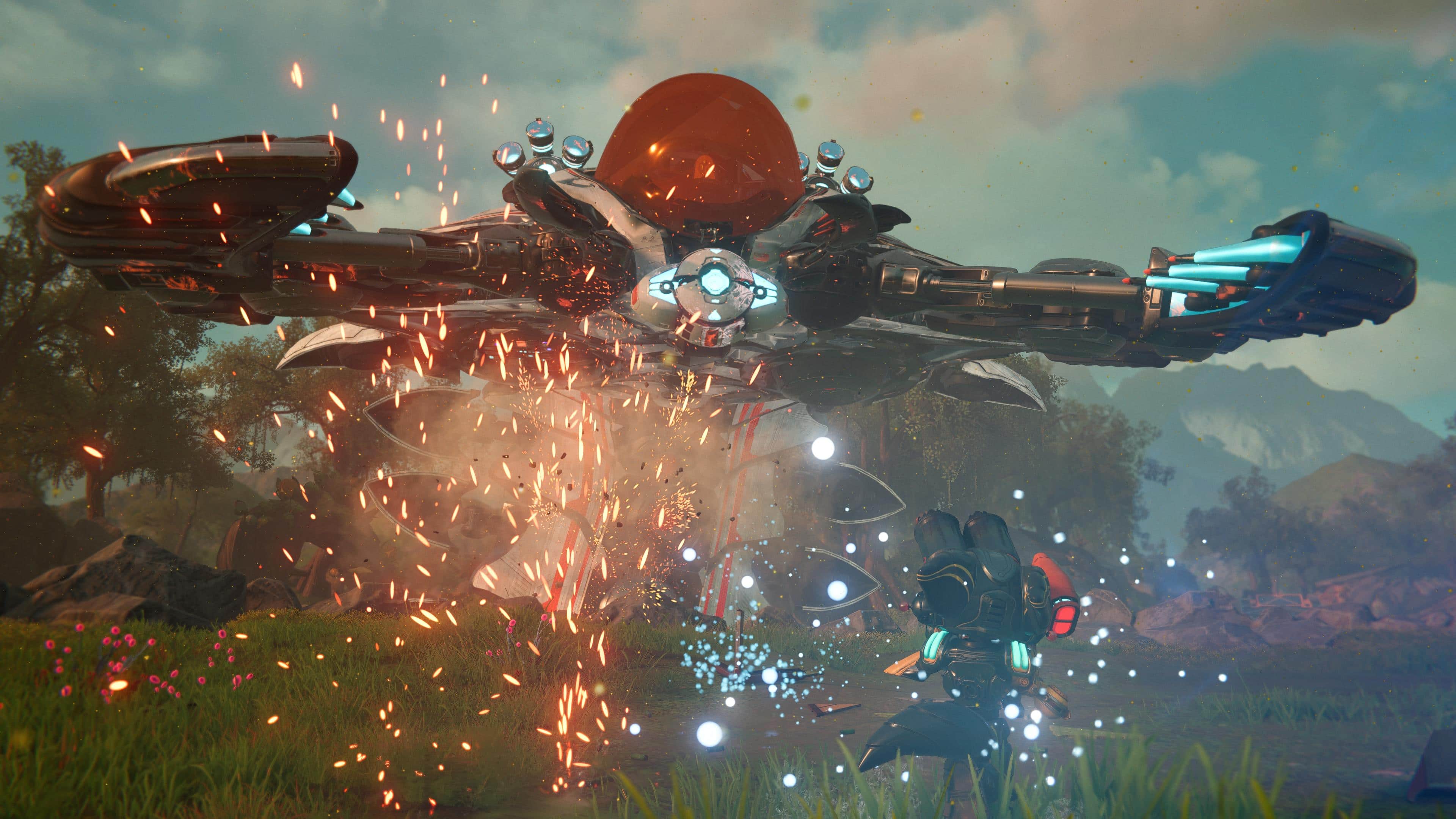 Make no mistake, Ratchet and Clank: Rift Apart is a gorgeous, impressive next gen only experience that is bolstered by Insomniac’s technical wizardry (let’s not forget they shipped three games since the launch of PS5) and great storytelling to make it not only a great new entry in a long-running franchise but also a reason to own a PS5. It’s also a great introduction to new characters like Rivet that hopefully have as long a future as Ratchet and Clank have a past.