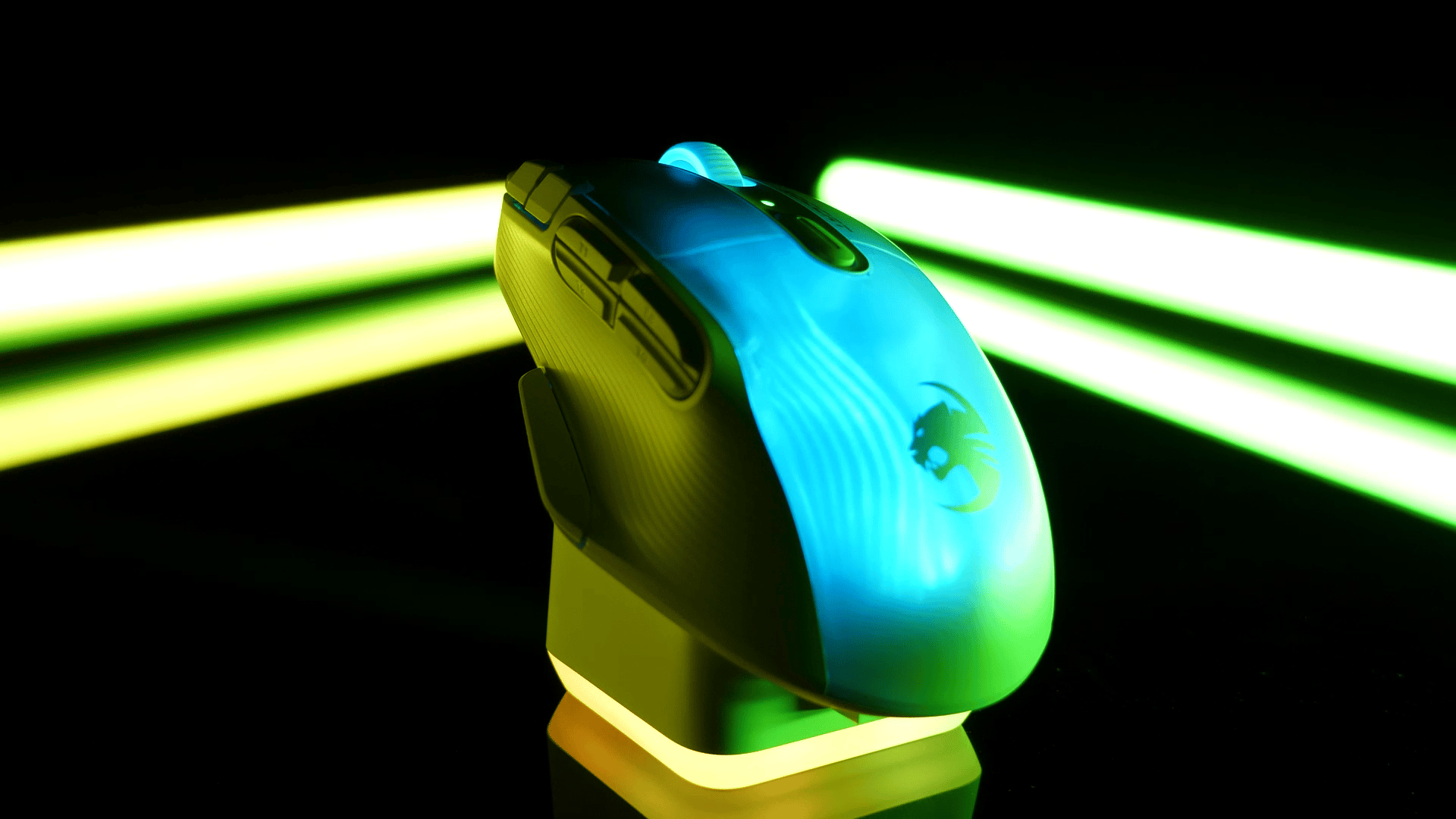 Earlier this year Roccat released the Roccat Kone XP, a wired gaming mouse that built on the legacy of their spectacular Kone line. We had the opportunity to go hands-on with it, and while it’s an incredible gaming mouse, it did have a shortcoming, that being only available as a wired mouse. Well, here we are, some odd months later and the company is back with its new Kone XP Air, the wireless variant of the previous iteration. Is this the gaming mouse you had hoped and dreamt about? Find out in our Roccat Kone XP Air review!

I’ve said it before, and I am saying it again — Roccat is a company that understands exactly what PC gamers want. Using their products for a few years now, I find it really hard to be disappointed by any of their offerings, and what little complaints I have had, they always come back with a newer, better product that seemingly feels “perfect.” Yet to my astonishment, they’re still capable of wowing me, by proving that there is still much room for evolution when it comes to their peripherals.

That’s where I find myself with my sample unit of the Roccat Kone XP Air. The wireless variant of our previously reviewed Roccat Kone XP.

From a design perspective, the mouse itself is indistinguishable from its wired counterpart. It has 15 total buttons, all programmable to meet the needs of RTS, MMO, RPGs, and yes, even FPS lovers out there. Seven on the left, eight on top, all appropriately placed on a shell designed for the utmost comfort. It really does feel great, and especially for those looking for a mouse that can also be geared towards productivity. The ergonomic design makes long hours of editing feel more of a breeze, and for you video editors, you’ll find mapping the additional buttons to specific shortcuts to be a game changer. Roccat’s “Easy Shift” functionality is also baked into the Kone XP Air, offering additional functions per available buttons.

The scroll wheel itself also has a tilt left and right button for those interested in adding more wheel functionality. That might seem odd to some, but I can tell you I’ve used it in titles like Flight Simulator to map my left and right rolls, and even in some racing games to control the camera without having to alter my driving controls.

On the underside there are some heat-treated pure PTFE glides that provide smoothness when moving the mouse around. And like the Roccat Burst Pro, the Kone XP line also adds a round washer-like glider near the sensor. It’s to help keep it clean, as well as adds more smoothness to the overall movement.

Generally speaking, the Kone XP Air is a large gaming mouse. It’s on the heavy side, clocking in at 99g, 4g lighter than its wired counterpart. Of course being wireless does give it less drag, but if you’re looking for a mouse that is in the lighter weight division, Roccat (and other brands) do offer excellent alternatives. Still, the ergonomic design really helps distract from the weight, and I found it to be perfectly fine in most of my gaming and work sessions.

The shelling also comes in two different colors, those being black and white. Both designs have full RGB lighting that truly shine through their transparent shell. Roccat users should be familiar with the Swarm software, which has now been updated to support the Kone XP Air. You’ll be able to use this software to unlock the full potential of the Kone XP Air, which allows you to adjust the RGB lighting and each of the programmable buttons. It’s easy to use, though specifically for the Kone XP Air, I do have one issue which I’ll discuss shortly.

Now looking at the pricing of the Kone XP Air, you may notice that compared to past offerings, the wireless version is significantly pricier this time around. In fact, it’s nearly double the original asking price of the Kone XP (wired, $89.99) coming in at $169.99. Yeah, a pricey one, and if not, the most expensive mouse offered from Roccat yet. But there is a reason. This mouse is a celebration of 15 years of hard research, so it has to feel a bit special. So rather than just include a mouse and a charging cable in the box, there is now a dedicated rapid charging dock, and my god is it a gorgeous one. 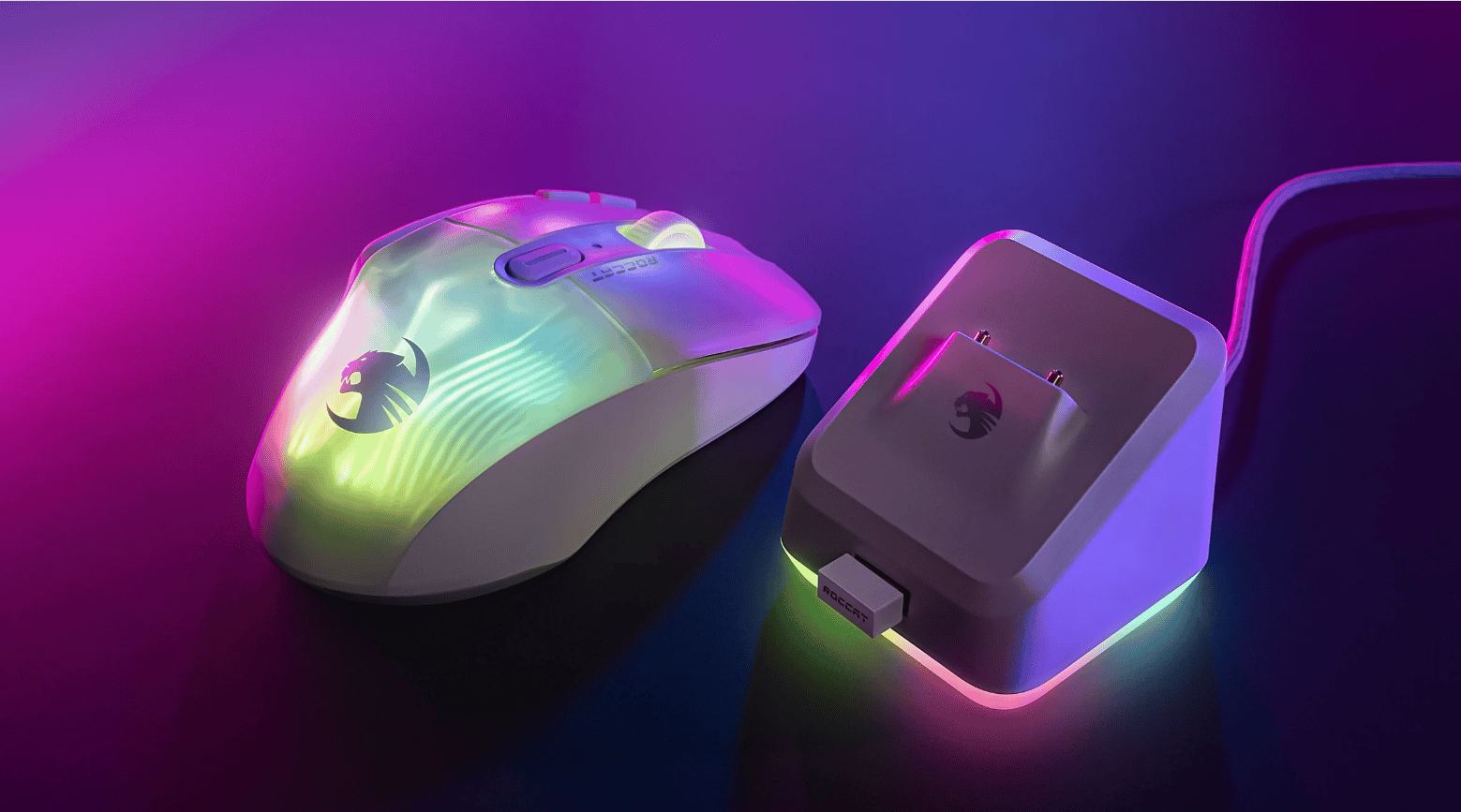 It really does look like it could be some sort of launch pad for a spaceship, and the added RGB lighting on the bottom makes it pop in the best possible way. It looks fantastic, and surprisingly some additional thought was put into it. The Kone XP Air mouse slides right onto the base with ease, with it connecting to your PC via USB-C. Pretty standard stuff, but the base also includes an additional USB port right in front. One issue I’ve had with wireless gaming mice is that they run off a USB dongle as well as needing another USB port for the charging cable itself. The dock eliminates the need to have to waste one other port as you can plug the dongle right into it.

It’s a great design, but it does have one oversight — that being the lack of an additional USB-C cable. Sure you probably have dozens laying around like I do, but there’s a good chance it doesn’t fit on the mouse as the port is enclosed by its shell. That means you need the exact size of cable to be able to slot it in and make it a hardwire connection. That hardwire connection is a requirement whenever it comes to updating software for the dongle and mouse And for someone who may be huge on cable management, you’ll probably end up sticking the base a bit away from you to hide the cables. That can be a bit of a hassle for some, unplugging the base, connecting the mouse, updating it, then plugging the base back in. That’s where a second supplied USB-C cable could have come in handy and avoid messing around with your specific setup. It’s not the end of the world of course, but an extra USB-C would have been nice to have included.

Cruising at the Speed of Light

Despite that last bit, the Kone XP Air is easily one of the best designed gaming mice that I have ever seen. It radiates in absolute beauty. Based on looks alone, this is easily my favorite gaming mice that I have ever owned. I love this mouse. But we all know that looks aren’t everything, and in the case of the Kone XP Air, it impresses on all fronts.

Equipped with the Owl Eye sensor (19K DPi) and the latest in Titan Optical switch technology, the Kone XP Air is a super fast gaming mice that provides that competitive edge that you so utterly deserve. The Titan Optical switches are a huge game changer, not just in performance, but in providing users with a longer lasting mouse. In fact, the Kone XP Air is rated 100-million clicks — a full lifetime! I’ll probably never get to see the wear of it, and even after two years my Burst Pro is still running flawlessly. So if you’re looking for reliability, you found it.

As for my performances during gaming, I noticed nearly no latency whatsoever in games like Warzone, Battlefield, Final Fantasy 14, and so many other titles that require quick reaction. Honestly this is almost as perfect as it gets without being hardwired. 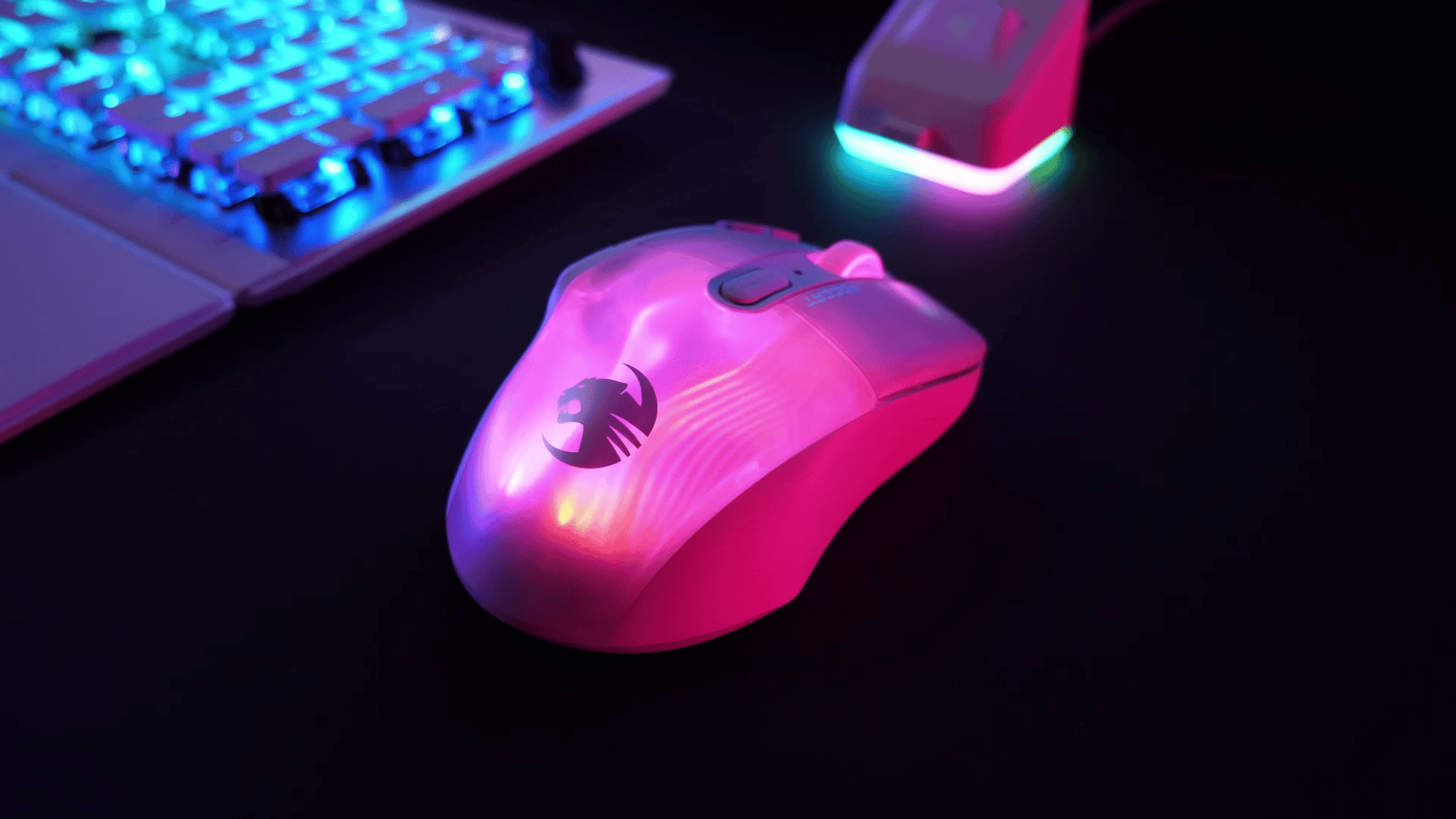 As for the charge itself, Roccat promises up to 100 hours off a single full charge, with 10 minutes of rapid charging giving you five hours. In our three weeks of testing, I found that I was charging the mouse every 10 to 12 days based off of roughly four to eight hours of use each day. So that claim is pretty spot on as far as we can tell, though you’ll likely find that the RGB lighting on the dock serve as a great reminder that it’s time to charge.

Honestly, this might just be the best gaming mouse I have ever used. Everything about it feels perfect, from its ergonomic shape, to the lighting fast response and satisfying clicks. It’s hard not to recommend this to anyone, especially those looking for a worthy successor to their current Kone mice.

However, that hefty $179.99 price tag is definitely not doing it any favor. While I absolutely adore the charging dock that comes, I can understand that there are some out there who would rather buy the mouse alone. Still, I stand by my statement that is the best gaming mouse I’ve had. So much so, that I’m willing to say that its earned my stamp of approval for best gaming mouse of 2022.

Roccat Kone XP Air was provided by the publisher for review purposes. You can read SP1st and MP1st’s review and scoring policy right here.

Kena: Bridge of Spirits Next Update Out on Sept. 27, Here’s What to Expect From the Anniversary Update