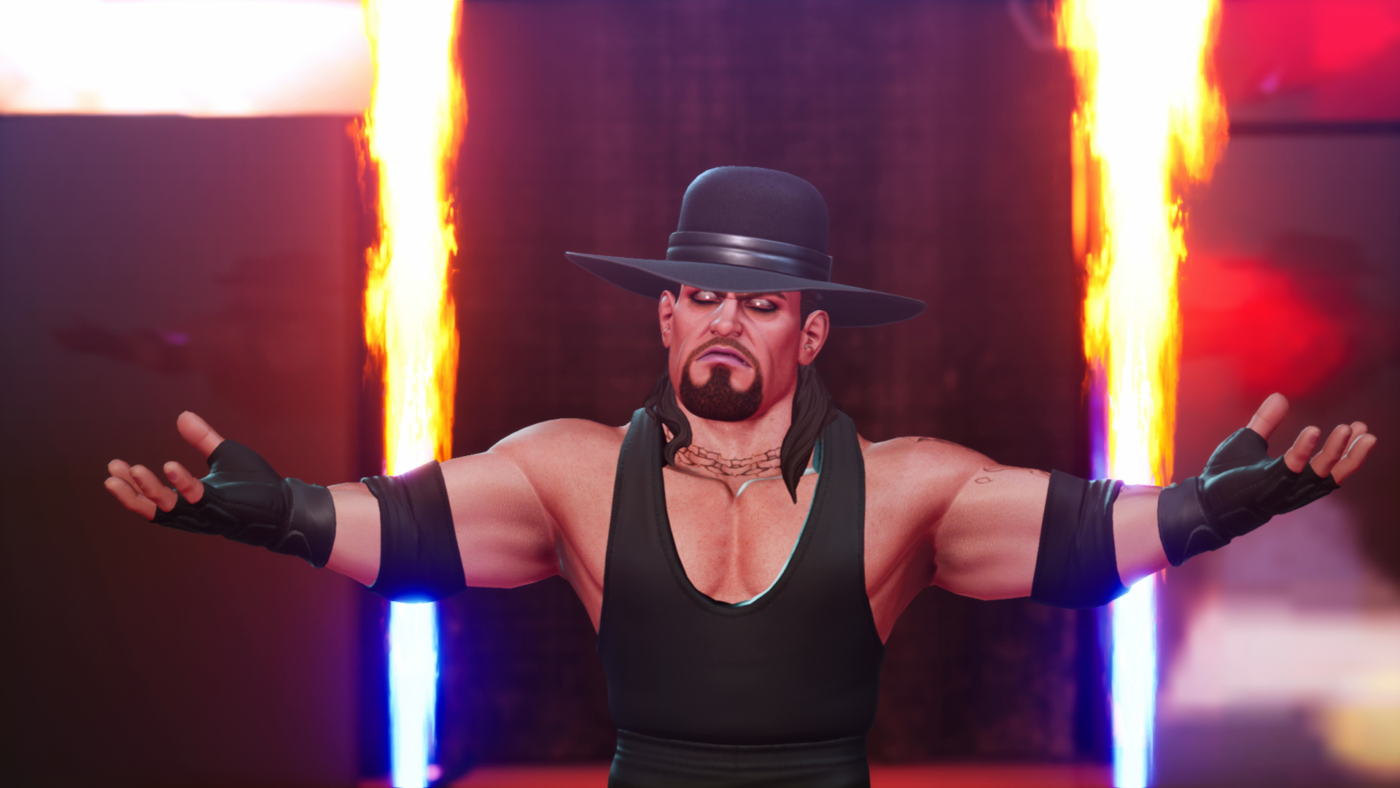 Let’s face it, the last few years for WWE fans haven’t been pleasant, at least when it comes to gaming. With the mainline WWE series underdelivering with its latest 2K 2020, fans have been in an uproar for some major changes. And while 2K did announce that they would be skipping a mainline WWE game this year, one rather unexpected surprise was that they were still planning on releasing a new WWE game.

Enter WWE 2K Battlegrounds, a not-so-serious wrestling game that takes all the over-the-top hijinks of the WWE and amplifies it by 100. Could this be the long awaited game changer that fans have been wanting? Or is yet another one to throw over the ropes? Read on for our WWE 2K Battlegrounds review.

The Most Electrifying Game in WWE History? Maybe Not.

Alright so 2K Battlegrounds probably isn’t the WWE game that fans were hoping to see, and while it’s understandable why some may shy away from it with its cartoon-like visuals, I think the overall direction (or more so idea) actually works. If you can’t tell just by looking at it, WWE 2K Battlegrounds isn’t a wrestling game that is meant to be taken all too serious. This is clearly represented from the more simplicity design of the characters. They look goofy, almost like they’re straight out of Fortnite. 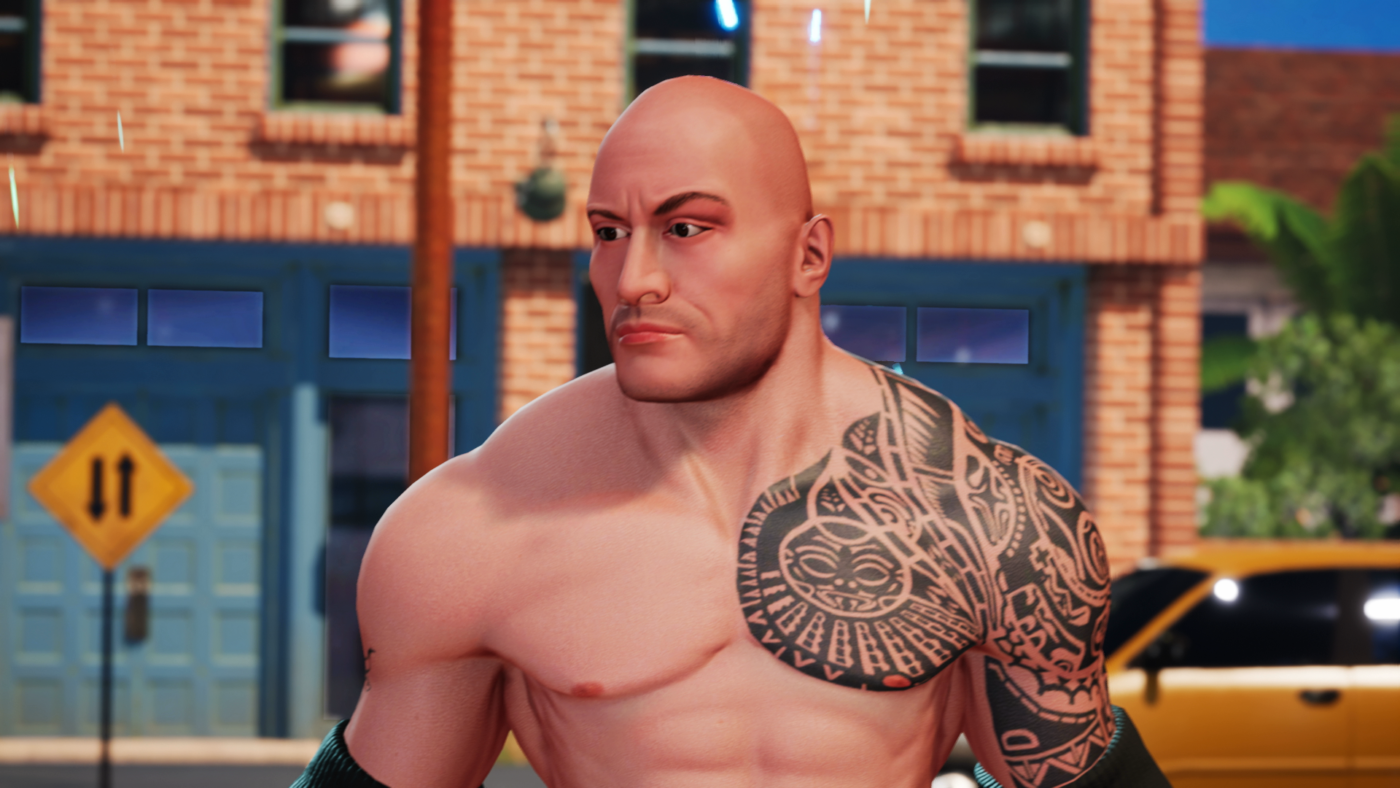 Not a big fan of it if I’m honest and while some of the wrestlers do look like their real life counterpart, others are not so well done to the point that they’d be unrecognizable if weren’t for the intros. Still, Battlegrounds knows what it wants to be, and if the visuals weren’t enough of an indicator then no doubt the campaign is.

Kicking things off, long time WWE antagonist, Paul Heyman one day wakes up with an idea to start a new WWE branch. This branch, of course, is called Battlegrounds. Teaming up with the likes of Stone Cold Steve Austin, Battlegrounds’ campaign will see the pair track down a new roster of clients for the Battleground brand. This is all told from the perspective of multiple characters in a comic book presentation.

Because it opts this way, it really allows characters of the main roster to really dig into their in-ring personas. I’ll admit, I had a few laughs through the campaign, because some of the moments were so ridiculous, yet so very much in line with those WWE stars. 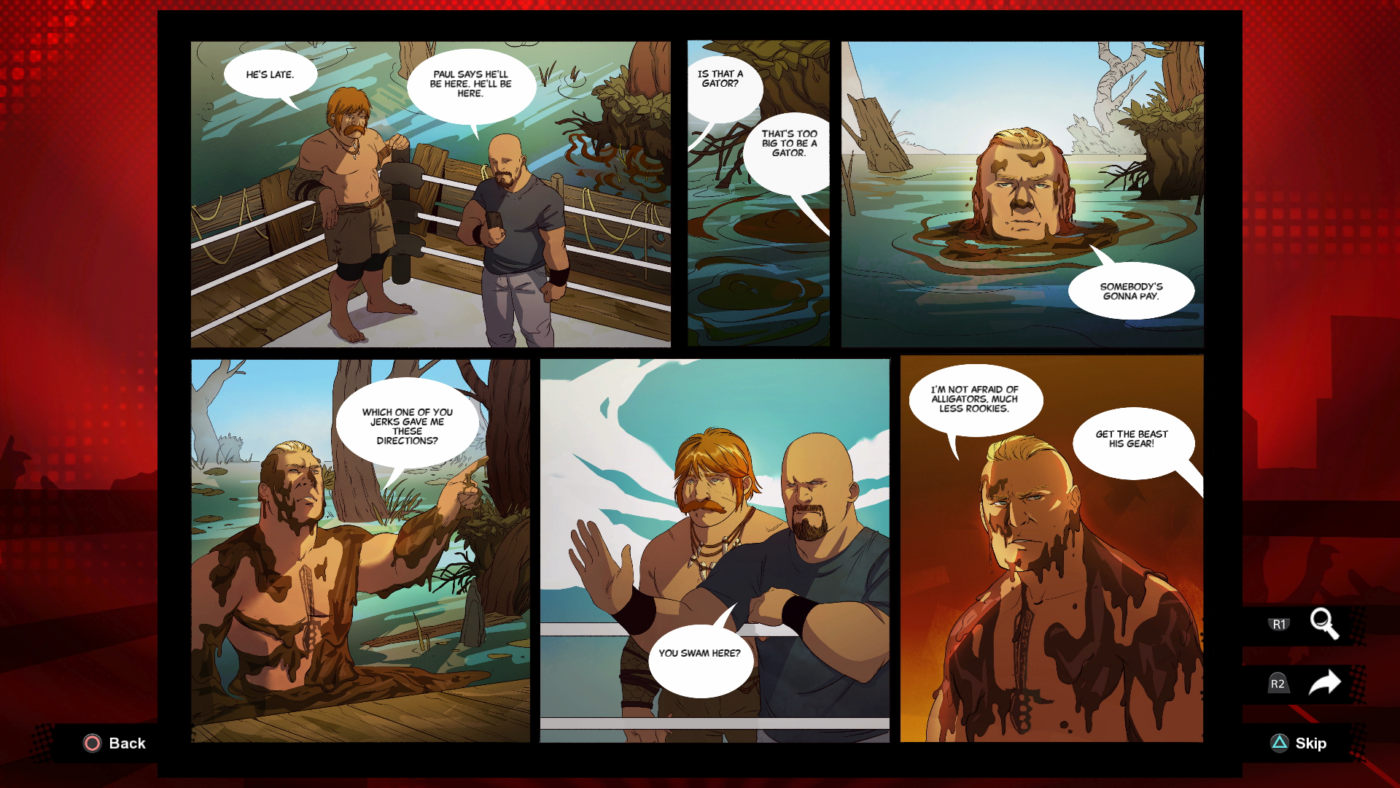 However, despite the story being a bit of fun to go through, the campaign did highlight some glaring issues that quickly drained a lot of the enjoyment away. For starters, there really isn’t any voiced dialogue in the game at all. While we can forgive the lack of narration during the before and after match cutscenes, the lack of a real commentary during those matches is just unforgivable. And I say “real” because Battlegrounds does feature long time fan favorite Jerry Lawler as a commentator, but his performance is so phoned in it might as well have not been in it. Perhaps this can mostly be chalked up to the fact that COVID-19 is making things pretty difficult, but even still for a wrestling game, part of the charm has always been from some of the well done commentary.

Another big thing that is lacking are unique ring entrances. While each superstar features their respective theme song, their intro are all practically the same. They break out of a containment (drop pods) and stroll down to ringside while oddly motioning their head. For a game that tries really hard to appeal to WWE’s more silly side, it really misses a big opportunity of getting creative with ring entrances. Imagine seeing The Undertaker rise from a grave, or Kane (post launch DLC) being summoned from the fiery depths of Hell. Nope, instead they enter just like the rest of the roster, very bland and boring. You can unlock different kinds of drop pods, but the effect is still the same. 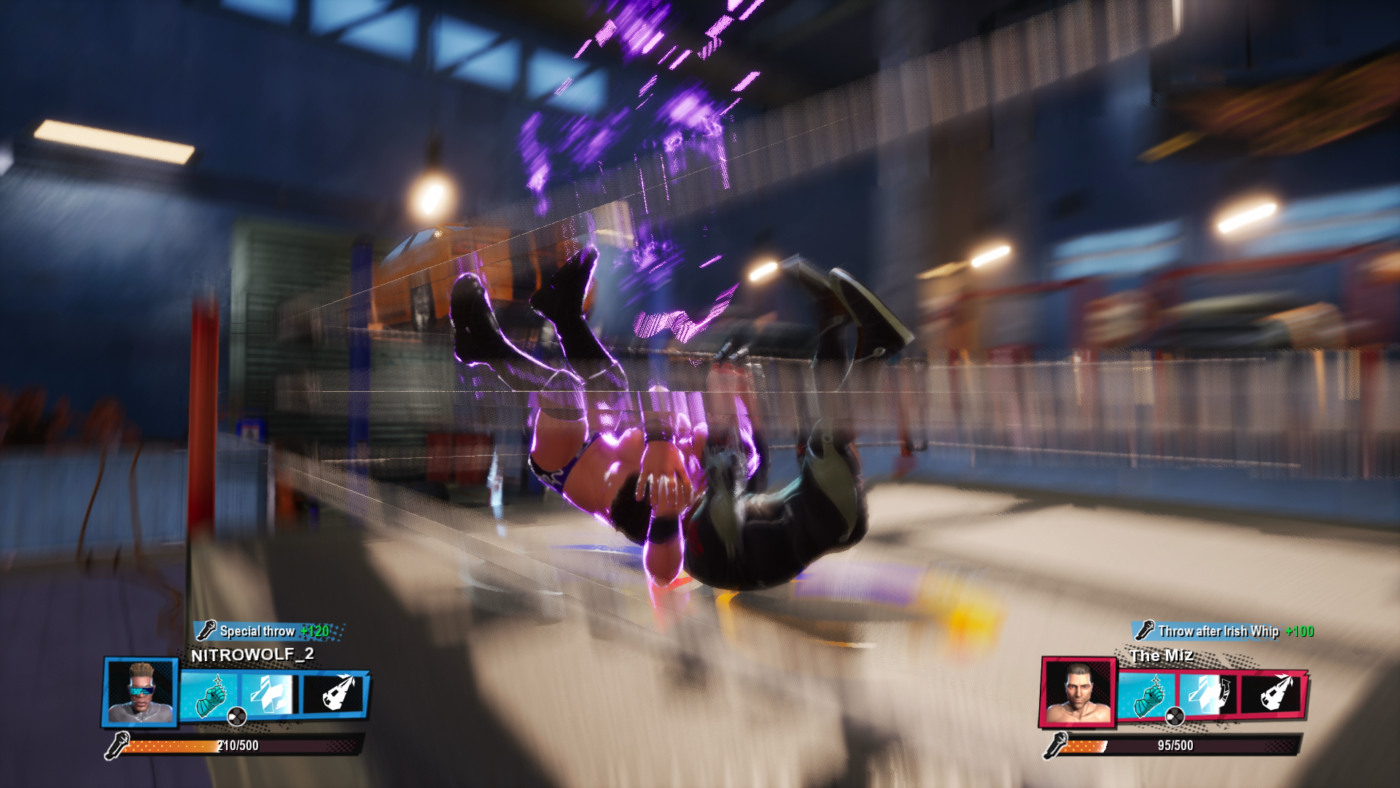 Looking past that we also have the overall gameplay. While fun at first, there is an impeding amount of repetition with all the character blending in with their uninspiring move sets. It’s odd playing a wrestling game where the massive 7-ft giant, The Big Show is able to run around and pull crazy maneuvers. I know I said the game shouldn’t be taken serious, but that kind of depth that is lacking is also holding it back from being an OK wrestling game to something great. I mean there’s definitely fun to be had with it, but because it sticks to it’s five class fighting variations for characters, a lot of them just lack the personality so many grew up watching. There’s nothing more jarring than being taken out of a game than seeing your favorite character act, well, out of character. And because of this, the combat quickly becomes repetitive as you begin to run through the same motion of things.

The biggest complaint about Battlegrounds is the fact that the majority of the roster is hidden by either a large grind or the in-your-face pay wall. The game features a total of 70 playable characters at launch, with 46 of those being locked away when you start. Now you can grind a couple of hours of gameplay in order to unlock a new character, or the fastest route in to just downright spend real money and purchase currency to buy them.

Sadly, despite finishing the campaign I was never actually able to unlock any character since the game online connectivity is broken on PS4. Go figure, lock two-thirds of the roster away and require online in order to unlock them. Things only get worse when you realize that not only can cosmetics be purchased, but also the different skills that characters can learn. These are often known as shortcut microtransactions, and while everything can be earned through tedious grinding, it’s clear that the designs in the game leans towards to the costly approach. Even specific tournament modes required currency. When the online did finally start rewarding me currency, in what I assumed was my earning in retrospective from near campaign completion, I barely had enough for just one skill upgrade. I’m not one to really complain about microtransaction in a game, but when it starts affecting the normal way of earning things one just can’t help but point it out. 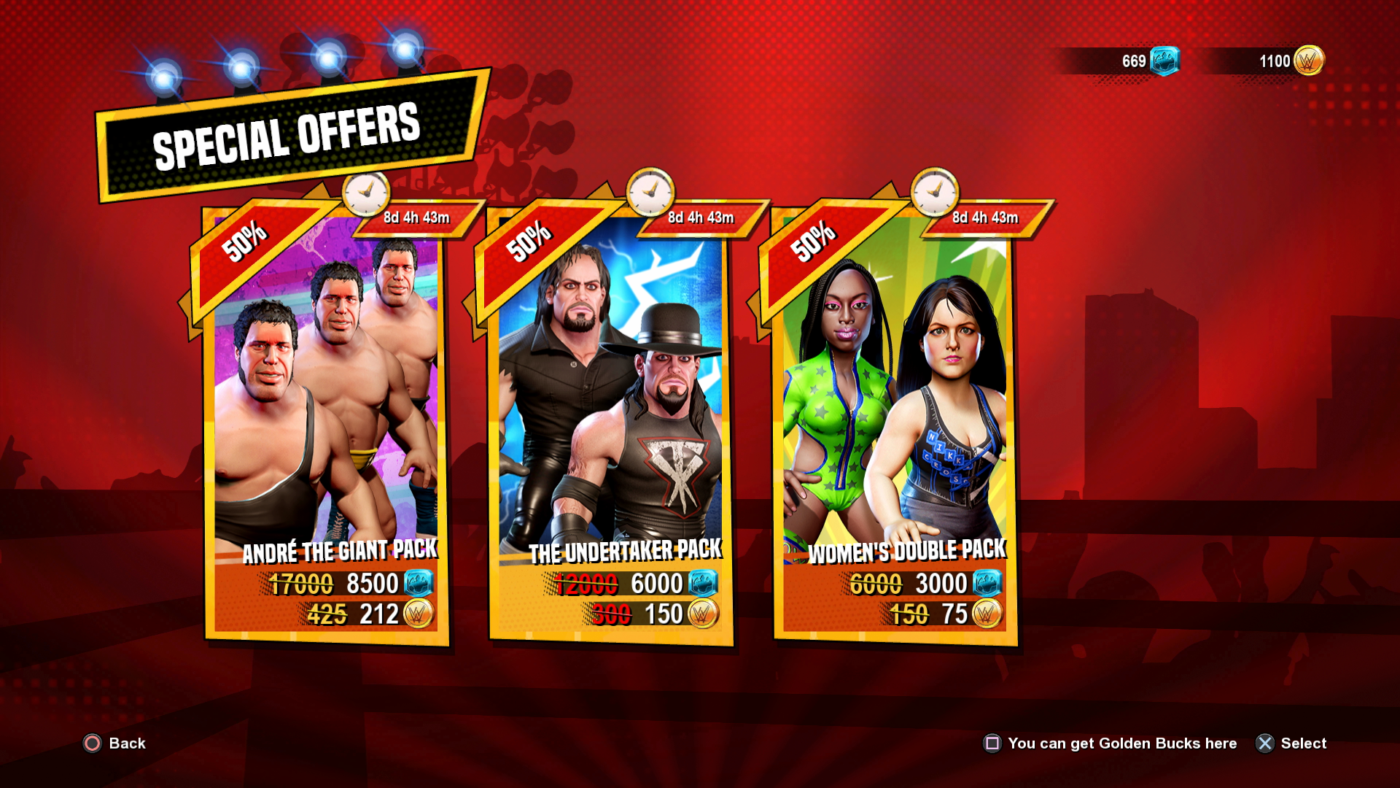 This does go without saying that there will be an extensive post-launch support, with 60 new characters being added for free. A very generous way to go about DLC when considering other titles of the genre charge for each characters. Still though, with the amount of required grind needed for the current roster, I think the title may find it hard to maintain a steady player base by the time those characters begin rolling over, assuming most aren’t already bored by the repetitiveness.

While WWE 2K Battlegrounds shows that it has some potential to be something greater, it ends up jobbing for the lack of personality. A lot of the ideas are there, though they don’t supply enough depth for a much needed fleshed out experience. Fun at times, but mostly repetitive, fans of the WWE universe will probably find this to be a good time killer. Sure, I enjoyed this a whole lot more than last year’s release, there just isn’t enough here to really say this is a good replacement.

Review code was provided for review purposes by the publishers. If you are interested you can read SP1st and MP1st’s review and scoring policy right here.