Senseless zombie-killing told in a B-movie format? Is this enough to sustain players fora  full game? Read on for our Zombie Army 4 review to find out. For those that have played any of the previous titles or the Sniper Elite series, you’ll know exactly what you’re getting yourself into with the latest in the series.

Zombie Army 4: Dead War stays true the gameplay of past iterations while expanding on it with a far deeper customization and weapon upgrade system. While the core gunplay remains the same, offering the series’ staple x-ray slo-mo kill shots, the ways to fend off hoards of zombies have evolved, giving players more ways of killing them. You can use special weapon mods that you unlock as you play such as electricity or explosives, and you can use environmental traps meant to lure zombies in. There are even zombie sharks that you can use to your advantage as they disembody the undead. 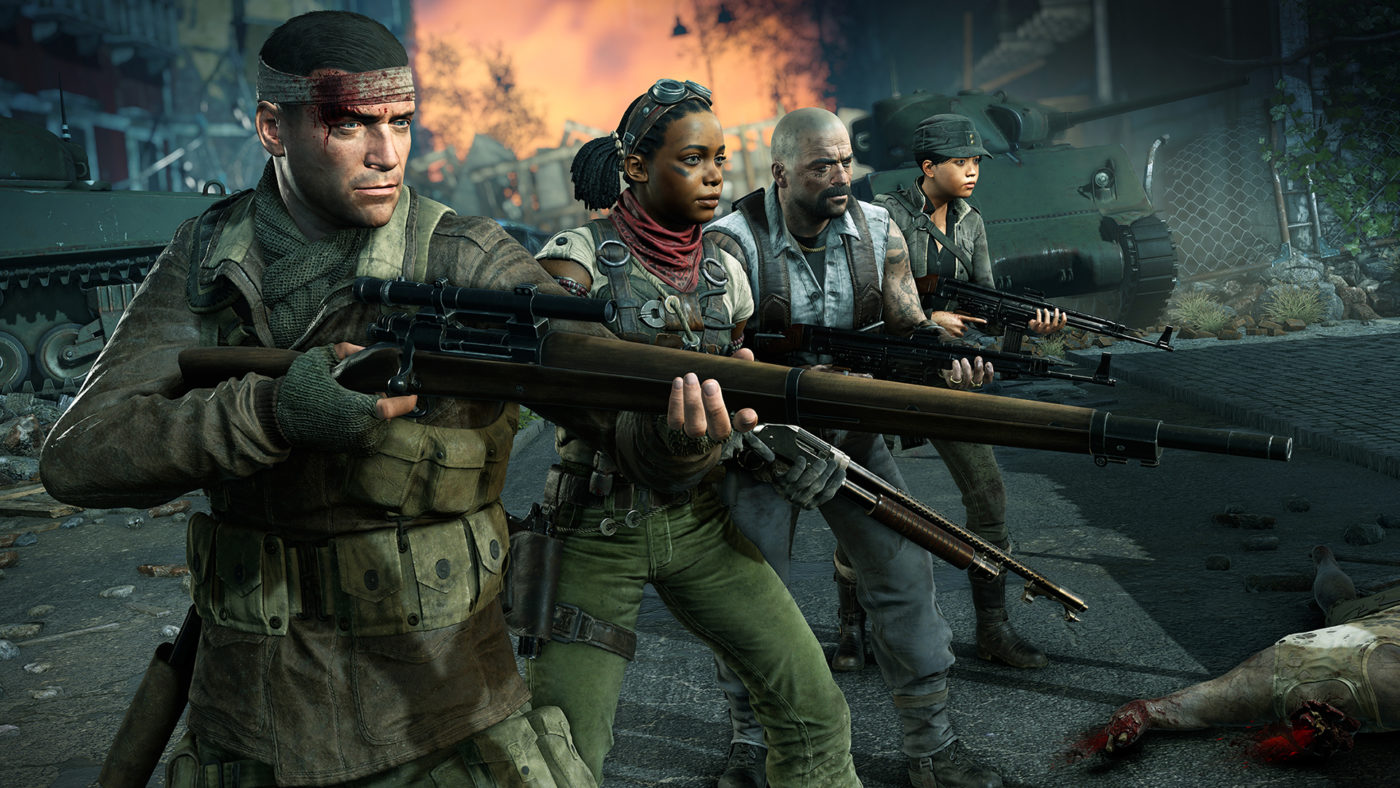 All this can be enjoyed in the four-player co-op the game has to offer. Whether you play with your friends or a group of random, one thing is certain with Zombie Army 4, that having more is fun. Yes, you can play this game by yourself, which does provide a bit of a challenge, but with the additional players, you can compete with one another for a higher score and find equipment far easier. The game is balanced for the added players if you so choose it to be, which is great because the difference in hoard sizes is very noticeable. As for replayability, the developers have set up a challenge system that rotates on a weekly basis, giving players a variety of modifiers. At the end of the day, the online aspect vastly improves the overall experience with how easy it is to join matches. This, however, does go without saying that there are some issues revolving around the gameplay itself.

The character movements I found to be extremely stiff and at times frustrating as they struggled to move around objects. This is especially noticeable when you begin to get surrounded by zombies, making it extremely annoying to navigate around them. We found that we were getting stuck on invisible objects that would get us killed by the onslaught of zombies. Depending on the objective, certain segments felt tedious and it didn’t help as we ran into constant bugs forcing us to restart entire checkpoints. The melee and ground stomps felt as if they didn’t work as enemies would simply not be fazed by them or damage modifiers to them just didn’t do much. A few of the perks and upgrade items felt counterintuitive in that they didn’t offer as much advantage as one hope. For example, a gun mod called “Vampire vision” restore health with critical hits when scoped. It would be a great mod, seeing that it’s one of the last tiers you unlock, but it makes the scope have a red filter over it, making it really hard to see things in the environment. Otherwise, in terms of performance, the game ran at a solid steady frame-rate even when there were massive hoards of zombies filling the screen.

As for the story itself, it plays like a classic ’80s B-horror zombie flick. It’s corny and the jokes aren’t too funny, but it’s ridiculous enough where it keeps the entertainment going. The overall levels were nice as we found ourselves in rundown cities, clostrophic sewers, zoos and plenty of other interesting places. There was a sense of horror added on top of the zombie aspect as if the world had more hauntings in it. You could rush through this game without realizing all the small details and Easter eggs placed around the maps. Though it’s understandable why some would avoid them as levels are littered with creepy Annabelle-like dolls that most definitely  seem to be “alive.” I can tell a lot of love went into some of these Easter eggs, more so than most games and I strongly suggest you look around for some as they will surprise you.

Zombie Army 4: Dead War may not be pushing the series to new heights, and that’s okay as it offers exactly what players come to expect. Its story is engaging enough with its campiness, environmental settings will keep you hooked, and the online co-op makes more fun of the dumb fun nonsense that the solo play already supplies. I highly suggest Zombie Army 4: Dead War to anyone looking for a good co-op game. That and anyone wanting more zombie slayings in their life.