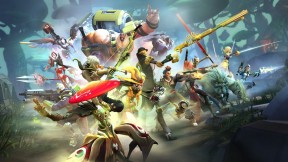 News 0 Gearbox Software is hitting fans with details on when to expect Battleborn‘s first story DLC campaign, as well as the next DLC character, Pendles. Recently, the studio finally revealed their DLC roadmap, which will deliver all five story DLC campaigns by Winter. You can check out the release schedule for their Premium/Season Pass DLC in full below: Premium DLC Timeline: Alani early […]