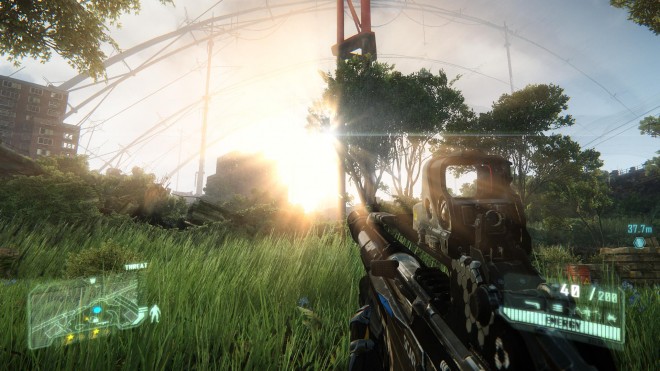 The one thing that held CGI in movies back for as long as it was is hardware.  Movies like Jurassic Park needed computers that filled warehouses to produce their effects.  Then, good hardware starting dropping in price and movies like The Matrix became possible.  But of course, though it still looks great, The Matrix’s CGI can hardly compete with Inception’s or Looper’s.  Why?  Because instead of having to use digital still cameras to capture realtime events from multiple angles, the computers available today can use a 3D scan of a person to create a CGI model of them and place them in a photo-realistic 3D environment without costing three times the production’s budget.

To me, gaming is the same way.  GoldenEye blew people’s minds when it came out and is the reason console FPS games are so popular, especially multiplayer FPS games.  But the N64 is a dinosaur compared to the Xbox 360 and PlayStation 3.  Now, because the hardware needed is cheap enough, we have games like Battlefield 3, Crysis 3, Call of Duty, and Halo, to name a few.  But this current generation of hardware was starting to show its age 4 years ago.  BF3 on console vs PC isn’t even a matter of opinion, it’s a totally different game on PC.

This is where I see consoles beginning to hold back innovation in gaming.  The consoles are designed to last for 7-10 years, which is great as far as long term electronics investment is concerned.  The only problem is, the hardware market cycles almost every 2 years.  While the locked down and uniform nature of a console certainly gives developers a lot of leeway and to push its hardware as far as it can go, it can still only go so far.  BF3 serves as probably the most glaring example of a game that’s been held back and tortured into working with console hardware.  It’s obvious that even in the PC version of BF3, DICE had to cut corners to make it work on current generation console hardware.  An even worse example would be Far Cry 3. (Just Google it. Trust me. It’s not pretty.)  And, don’t even get me started on Skyrim.

The problem is that in order for a console to be worth making, it has to last a really long time.  For the first few years, I’m sure the Play Station 4 and Xbox One will do a fine job with most games.  But once GPUs like Nvidia’s Titan hit the $300-500 price point, you better believe that we’ll be seeing Far Cry 3 all over again.  With consoles, there is no room for improvement, there is no way to fix the weaknesses brought on by time.  Because of that, game development will always have a major bottleneck so long as the consoles are the biggest distribution platform for games.  While first party exclusives might not suffer too much from this bottleneck, multiplatform titles certainly do.

I wish I could share the feeling I had when I played BF3 on PC for the first time after having played it on Xbox 360 for 6 months.  All I could think of was “THIS is how the game is SUPPOSED to play.”  And it wasn’t just the graphics, it was everything: Player counts, map layout, gameplay – everything in BF3 is better on PC.  I realized then just how held back most games are because of consoles.  Last month, I sold my Xbox 360, all my games, cancelled my Xbox Live membership and went 100% PC, and I haven’t missed a thing.  My gaming experience since has felt much more “full.”

Now, I know what you’re thinking: “PC isn’t a well optimized platform for gaming as things like driver issues, hardware compatibility  and version support are almost always an issue for PC and console has none of those kinds of issues.”  And you’re totally correct.  Every day I run into a new bug or software issue that takes a Google search to fix.  Games like Metro: Last Light get the firing squad from PC gamers for its crashing issues.  But considering Last Light was a multiplatform title developed by a bare bones staff on a shoestring budget in a concentration camp, I wonder how much of its issues wouldn’t exist if they hadn’t been stuck porting it to current generation consoles and making sure what they were putting into the game was scaleable.  In fact, between hardware becoming cheaper and easier to use, and services like Steam simplifying the gaming experiences, I wonder how long it”ll be before those Google searches stop being an everyday thing.

One of the few positives that console gaming has to offer is UI and controller interface design.  The software running today and tomorrow’s consoles is genuinely impressive, intuitive, and incredibly convenient for the end user, albeit littered with ads.  The customer satisfaction, though, with the console and smartphone UI experiences over the past few years has inspired companies like Valve to design similar UIs like Big Picture.

For those of you unfamiliar with Big Picture, it is genuinely a fantastic piece of software and, in my opinion, if developed to include more features, will easily compete with and outshine almost any console UI in the near future.

Valve is making it clear with their release of Big Picture that they want PC gaming to be simple for the average user.  Considering how much clout they carry in the PC gaming community, if anyone can make PC gaming easier, it’s going to be Valve.  In fact, it wouldn’t shock me if Big Picture were to receive a big update this summer that greatly expands what it can do.

Now, I’m not suggesting that you should wholly ignore the Xbox One or PS4. They will most likely be great devices for both media playback and gaming.  What I am suggesting is that, if you’re really into gaming, keep in mind that 4 years from now, the hardware in the PS4 and Xbox One will be hitting 6 years old.  6 year old hardware, even in a console, is pushing the limits of what developers can scale back their games to in a BIG way.  So if you really want the best games possible, maybe we need to trade convenience for power.

Like I said, Steam wants gaming to be easy to do and to be accessible to everyone.  If they can implement a standard that makes running games on PC a no-brainer for the average person, or if they change the console market by proving an upgradable console can work for the average Joe, I’d be totally on board to buy a new console from them.

As a gamer, it’s not just about the best graphics or best framerates to me, but when the next-gen consoles fall too far behind PC hardware to run 2K or 4K games (if they even can), the gap in performance will be painfully obvious, just like it is with current generation consoles.  This slows down the innovation and graphical advances in gaming that we so desperately want.

As a gamer, I want developers to have the freedom to develop games how they see fit and not have to worry about scaling down or holding back their games so they can run on old hardware that nobody uses anymore.  I know that PCs aren’t immune to this issue, but the big difference is you can always upgrade your PC to something that can run any game for the same price as buying the version 2.0 of a given console and on roughly the same timetable too.  Unfortunately, because the console market is the biggest gaming market their is, game developers have develop for it.  That means engines like the CryEngine, which are capable of nearly total photorealism, won’t ever be used to their full potential.

While it’s clear the next gen consoles will be able to handle newer engines without substantial downscaling, it’s still something that’s required to get them running properly and that developers are having to remove features to make that downscaling possible.

A great example of this is the Unreal Engine 4 running on the PlayStation 4 vs. the PC:

The key differentiating factor between last year’s demo and this newer iteration is that the Sparse Voxel Octree Global Illumination (SVOGI) lighting system hasn’t made the cut. Instead, Epic is aiming for very high quality static global illumination with indirect GI sampling for all moving objects, including characters.

‘[SVOGI] was our prototype GI system that we used for Elemental last year. And our targets, given that we’ve had announced hardware from Sony, that’s where we’re going to be using Lightmass as our global illumination solution instead of SVOGI,”‘ senior technical artist and level designer Alan Willard told Eurogamer. (Thanks, Nick Gigante.)

What are your thoughts?  Are you excited to finally have a new console in your living room?  Or are you worried that despite being decent now, it will show it’s age just like the current-gen consoles and hold back games from their full potential?

DICE Announces One Billion Hours of Battlefield 3 Played To Date