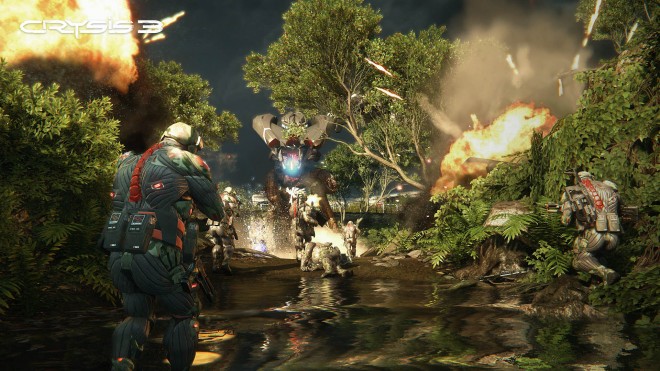 The Crysis 3 multiplayer beta is live and is here to stay until the 12th of February, one week before Crysis 3 officially launches on the PC, Xbox 360 and PlayStation 3 on February 19. What do we think of it so far?

Let’s kick things off with what most Crysis games are judged by: The visuals. Needless to say, the PC version of Crysis 3 is the way to go here. It. Is. Beautiful. Only a few weeks away from release, hopefully the Beta is giving you PC players a chance to see where your hardware sits and whether or not you need to make any tweaks before February 19.

While it’s undoubtedly understood that the Xbox 360 and PlayStation 3 versions simply can’t and won’t match up to their PC counterpart, I was still expecting a larger margin of improvement over Crysis 2 in the visual department. Improvement is there alright, but at times, I feel like I’m still playing Crysis 2 all over again, but on new maps. A lot of the audio seems to be re-used. Even the weapons look a little too familier, with the tech-bow and other alien additions being the exception. As it stands, I’ve definitely seen better on my Xbox from games like Halo 4 and Battlefield 3, but I’m hoping that won’t be the case by launch.

Having said that, I can see that Crytek has learned a thing or two when it comes to the user interface. Text is bigger and clearer both in-game and in the menus. It makes more sense and is much nicer to look at. The HUD is clean and simple and sports a useful mini-map that keeps you informed, especially in multi-storied environments, which the two maps in this beta seem to feature a lot of. In the menus, party options and challenges are clearly presented and cycling through equipment customization is a breeze. It’s also made pretty clear what you need to do in order to unlock your next attachment or nanosuit module when browsing through your equipment.

So far, Crysis 3 feels a lot better than Crysis 2. Controls are tighter and more responsive, aiming and shooting doesn’t feel as clumsy, and jumping, sliding, and mantling has never felt smoother. You’ll notice that the gameplay has been significantly streamlined, which can be a good or bad thing. Sprinting, for example, no longer requires energy which increases the pace of the game significantly. However, those who enjoyed and mastered the meta-game of energy management found in previous titles might find Crysis 3’s gameplay a tad too hollow. I do wish there was a greater variety of weaponry as well, but I’m thinking the beta is simply limited – seeing that we can only manage rank 10 before initiating a “Nanosuit Reboot” – and that the full game will include more. The new tech-bow adds some interesting new gameplay elements, however. I’m not sure how many players will consistently consider using it as a primary weapon. The ability to tweak weapon attachments in-game on the fly is genius as well.

Both maps, Airport and Museum, are action packed and appropriately sized. The amount of verticality is appreciated and allows great use of the “Air Stomp” technique. Each layout is easy to maneuver and both maps make you feel like a Parkour bad-ass. Despite the darker tone of Museum, I find it to be more visually impressive than Airport due to its great use of lighting. Too bad I can barely find any games on it as everyone votes for the brighter, greener, and happier Airport. Crash Site is a rather fun objective-based mode that has you earning points by defending the vicinity of a crashed alien pod which randomly relocates throughout the match. The new Hunter mode has two permanently cloaked nanosuit-wearing soldiers stalking regular soldiers trying to extract from the battlefield. Each death of the hunted yields a brand new hunter until there are no more left. Honestly, this mode didn’t excite me all that much, though I could see it being a much different story when played with a large group of friends over microphones.

Generally, I do find the beta a tad buggy (sounds don’t sync, kill-cams are off, a few graphical glitches, etc.), which is okay. It is a real beta, after all, and the exciting and distinctly unique gameplay more than makes up for it. The end-of-match highlight reel is a nice touch, and the Halo-esque inspirations (alien weapon pick-ups, the Pinger, and VTOL ship with man-able turrets) are also very welcome in my books.

In my head, I’m thinking that Crysis 3’s multiplayer will be “beast” if things and network issues are cleaned up and polished to a shine. If Crytek can manage that, I’ve got the feeling that Crysis 3 might just surprise a lot of MP aficionados when it releases this February 19.

Now, a lot of you will be tempted to blow this game off as “just another shooter,” but I promise that you will find some charm here that just might seduce you into making the switch, especially if you’ve got yourself a pretty powerful PC. The beta is free, after all, so you’d be doing yourself a disservice by not giving it a shot. Call of Duty players will find themselves comfortable in the fast-paced action, while Halo vets might take some interest as well.

How are you enjoying the beta so far and on what platform are you playing it? Let us know your thoughts in the comments below!