Gamers Edge Gaming Eyewear Review – Get 20% Off Your Own Pair

Gunnar Optiks isn’t the only gaming eyewear company on the block. Vision Concepts and their Gamers Edge brand eyewear make a pretty suggestive statement that they belong in the gaming eyewear business. So, when a juggernaut is faced by an up and coming brand, who really wins? What are the pro’s and con’s when compared side by side? At the end of the day, is gaming eyewear even worth the money?

I was lucky enough to be sent a pair of Gamers Edge eyewear from Vision Concepts. The style frames I chose were that of the Silver Aviator style. Now, to get into a bit of the basics. With the amount of time we all spend in front of monitors and TV’s, it’s not a bad idea to think about investing in something to help our eyes out. With harsh digital glare and artificial UV light that emits from our TV’s, it takes it’s toll over time and can be damaging to your eye’s health. Have you ever gamed for a long session only to find your eyes getting dried out and irritated, maybe even feeling a bit fatigued? This is where companies like Gunnar Optiks and Vision Concepts come into play. They built a brand of performance enhancing glasses to help reduce the aforementioned side effects, as well as to help in terms of performance. Below I’ve broken down the two pairs in comparison to each other in a few crucial categories. 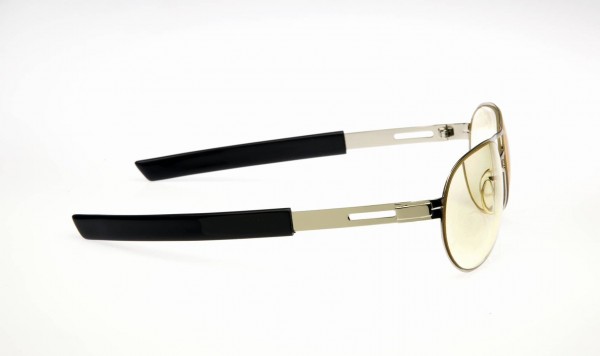 Right off the bat, the one thing that stands out about the Gamers Edge brand is the affordable prices. Weighing in at $39.99 USD, their models are very affordable for the average gamer in comparison to the more expensive Gunnar Optiks, which are around $79.99 USD. Then comes in the classic phrase, “you get what you pay for, right?” That does not necessarily hold true to form in this particular instance. Gamers Edge goes toe-to-toe with Gunnar Optiks in every category and holds its own better than you would think. Gamers Edge obviously wins here, as the Gunnar’s are almost twice as much.

Nobody wants to feel uncomfortable doing anything in life. If you aren’t used to wearing glasses, then regardless, beginning to wear a pair could take some getting used to. In comparison to the Gunnar Optiks, I’ve noticed the Gamers Edge model to be a bit more comfortable. The main area in which I had issues with my Gunnars was the nose pad. The Gamers Edge pair just fit my nose much better and I found myself adjusting the Gamers Edge glasses less often. Both pairs were very light on my face and I didn’t have any issues with the weight. Also, both pairs came headset ready, meaning the frame extends straight back past your ear so your headset doesn’t shove the frame into your head. Now, I wouldn’t go out on the limb and say the Gunnars are uncomfortable, because they are not, but the Gamers Edge model edges out Gunnar Optiks in this category. No pun intended.

With owning any gaming item, you need to be careful with how you treat things. Especially with glasses. Tossing them around or accidentally stepping on them could result in a fatal outcome. Now, I’m happy to report that both pairs seem rather reliable, although I am the type of person to take extreme care of items I purchase. There’s not a worse feeling when your scratched disc won’t load, seemingly feeling like you just tossed $60 down the toilet. The same concept can be applied to gaming eyewear. As long as you take care of your pair and don’t toss them around, they seem to be reliable and will last you a long time. Neither pair seems cheaply made and both have good build structure. I’ll go with an even tie here.

Sure, some of my fellow gamers out there are all about their swag. If you are going for a stylish look and you are the type of person to always look their best, I suggest going the Gunnar Optiks route. While the Gamers Edge brand isn’t ugly by any means, they are just limited to only four design choices, while the Gunnar brand has a variety of different choices to choose from. My pair of MLG Phantom Gunnars are extremely sleek and sexy, while my Gamers Edge model could be mistakened for your casual pair of sunglasses. Now, for me, I don’t care about looking good while gaming, regardless, but I know that some of you may. Gunnar Optiks wins the style category.

Both claim to have their own specific lens formula. Gamers Edge has their “iEdge lens filter” while the Gunnar boasts “i-AMP lens technology.” Initially, in my review, it took time getting used to both pairs, considering I’ve gamed for a decade while wearing nothing. Once you get used to the lens tint on both glasses, which is that of an amber color, you come to appreciate it. The big difference that stood out to me was the Gunnars were lighter in color than the Gamers Edge pair. Textures seem to be more vibrant and detailed with both pairs, and all of that extra light emitted from my TV being cancelled out is a major plus. I tested both pairs while playing Battlefield 3 and Black Ops 2 and after going back and forth, I seemed to prefer the Gunnar’s over the Gamers Edge, but it wasn’t a definitive decision, which is quite surprising.

Overall, I believe the Gamers Edge brand to be worth your investment and I would gladly recommend it to anybody out there looking for a pair of gaming eyewear at an affordable price. You are getting comfortability, reliability and your helping your wallet at the same time. They belong in the conversation with Gunnars and should not be ignored.

You can eye up your very own pair of Gamers Edge eyewear right here. Using the code ‘MP1st’ after you add an item to your cart, you’ll receive a 20% discount on any pair.

Are you a heavy user of gaming eyewear? Do you consider it an important part of your gaming peripheral?