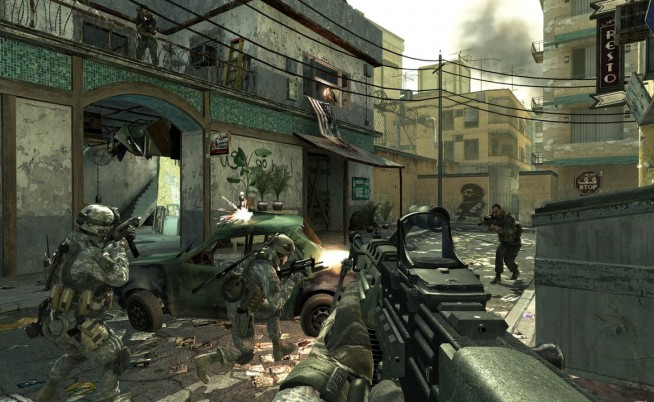 Mention “subscription-based play” to an online shooter fan, and be prepared to settle in for a vitriolic, hate-filled rant as to the “milking” of customers and the gall of greedy game publishers. Had Activision, EA, or any other publisher decided to charge monthly to play their respective games online, it would have been a guaranteed disaster. I am glad these games are currently free-to-play, and see no reason why, in their current state, any publisher would think people would pay extra to play these games.

However, I believe there might be a way to not only justify a monthly fee for an online shooter, but actually have it improve the online experience (notice the title says “How,” not “Why;” I don’t want games to go pay-to-play, but if it happens, it needs to work to the benefit of the consumer and the experience).

If a shooter were to go pay-to-play, there would need to be dedicated servers, and those servers would need to be labeled and categorized by region. Call of Duty and Battlefield draw enough players to justify region-based servers, so that every match would take place on a solid, lag-free server. No host advantage. No cheaters.

Activision’s Call of Duty Elite service and EA’s Battlelog (and any other game’s online service) would be upgraded, free and offer around-the-clock support service for all regions.

One of the huge draws for modern shooters is persistent character progression, and a monthly fee could enhance that key element. A pay-to-play service would need to feature exponentially more weapons, kits, attachments, modifications, camouflage, and equipment unlocks/pickups spread out over the player’s career. In addition, it might be worth cribbing some elements from MMO games; perhaps your character would have stats, and you could decide whether to increase your base movement speed, stealth level, or hit points upon leveling up.

All DLC would be free to players, would be released monthly, and feature far more than just map packs. New game modes, community-created content, weapons and items, and customization features would be uploaded to the servers to offer copious variety and the kind of content that would justify a monthly price tag.

Again, I do not want to pay monthly to play my online shooters. However, I believe that it won’t be too long until one or two publishers decides to give it a shot. While most people would probably scoff at the idea, I think the possibility of it being beneficial bears consideration. If I could buy a popular shooter, and know that I would have a content-filled, balanced, lag-free, constantly-updated experience with myriad options and personalization opportunities, I would seriously consider paying 5 or 7 dollars a month for it. That would be approximately the same amount per year as the current going rate for Call of Duty’s map packs, but would offer far more content.

Now, in addition to the previously mentioned caveats, there would need to be some other stipulations. The practice of releasing annual sequels would need to stop, as that development time and the associated resources would need to be dedicated to creating content for and maintaining the existing game. As the user response was gauged, and the experience was tweaked, any other issues that might arise would be dealt with in the appropriate fashion and in a timely manner.

Whether we like it or not, micro transactions, DLC, and pay-to-play are the future. I hope as developers and publishers push these boundaries, they continue to keep the gamer’s best interest in mind.

Would you ever pay a monthly fee for a multiplayer game (or genre) that is currently free-to-play? What would a publishing team have to charge or include to make it worth it for you? Let me know your thoughts in the comment section below, and don’t forget to follow MP1st on Twitter and Facebook!

While you’re here, check out 5 Features Next Gen Multiplayer Will Fail Without

MW3 – Promised Sniper Lobbies and Elite Features on the way, Including Mobile App