Today, Xbox 360 Elite Premium users got a taste of June’s content which includes three brand new Face Off maps titled Vortex, U-Turn and Intersection, along with another Spec Ops mission titled Arctic Recon. As always, I’ll be reviewing these drops for you in case you aren’t an Elite Premium member.

Before we start, I’d like to note that June’s original drops included a map, a spec ops mission and a classified item. With the new Elite drops only being revealed yesterday, it seemed odd to people that we ended up getting no new maps like planned, and no classified item. Many speculated that we’d finally be able to see gun DLC in June, but that doesn’t seem to be the case. Mark Rubin has confirmed that these three face off maps included in June’s Elite content will be the last of the Face Off maps, which is extremely odd to me. Infinity Ward blessed us with Face Off last month, which at first, a majority of the community accepted and applauded. They even showered us with two free Face Off maps to sweeten the deal. A month later, it doesn’t seem like many people are still on that Face Off bandwagon, as games I’ve tried to join today were riddled with people constantly dropping out, or even worse, attempting to boost. Ignoring these flaws, I’ve cropped up my own review of the three final Face Off maps, including the Spec Ops mission. 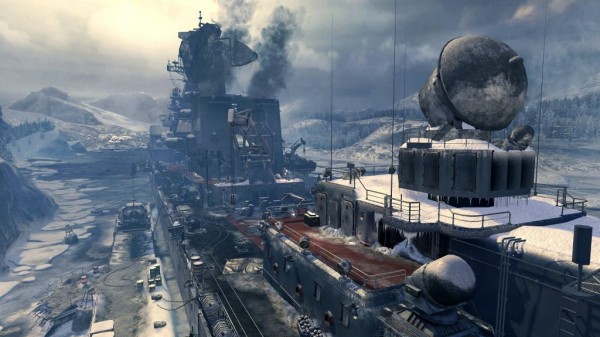 Arctic Recon pits you in the Siberian wilderness to destroy the Russian warship Kuvalda. One person will man the recon drone, equipped with a machine gun and a targeting system, while the other person is on the ship deck with an ACR. The mission is for the recon drone to mark four targets on the ship for the foot soldier to plant beacons at. Cover fire from the recon drone, patience and communication is key to tackling this mission on Veteran difficulty. Once you manage to tag all four beacons, you must race back for extraction within two minutes while facing heavy opposition. Once you fight your way through enemy lines back to extraction, a neat cinematic as you fly off in your Little Bird displays a Reaper shooting down missiles at your marked beacons you planted while the Russian warship is destroyed. I’ve always been a personal fan of these downloadable Spec Ops missions because it challenges you on Veteran, and I welcome more of this from Infinity Ward, Sledgehammer Games and Raven Software. 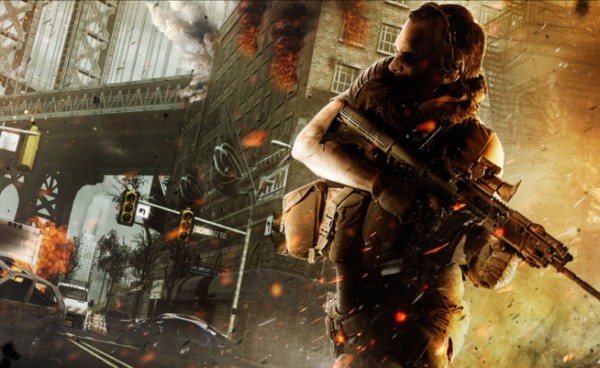 On to the Face Off maps. Intersection takes you to New York where you fight on a two block massacre of a street with bombed out shops including a jewelry store, movie theater and book store. Here you have the choice between Delta and Spetsnaz. The map as a whole seems to be a decent sized map for 2v2 action, with a lot of the action taking place inside the buildings which causes great close quarters combat. In the few matches I’ve played on this map, it seems like opposing players only wanted to camp in these buildings the entire game, which is nothing new to me or any other avid Call of Duty player. Take precaution when entering and exiting buildings due to the one building located in the southwest having an overlook of the entire map. Intersection is good for 2v2 and 3v3 action. 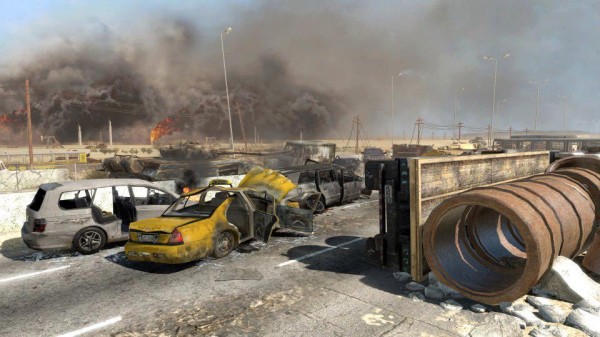 U-Turn is set on an abandoned highway that is full of cars, trucks, tanks and vans. You can choose between the Inner Circle and Delta here. Oil fields burn in the background as you must bob and weave your way through these vehicles for some action, or you could walk the slim outsides for a flanking opportunity. There’s a small underpass that is complete with a car that you can vault to take you back up top to the highway. This map, to me, comes off as lazy. There doesn’t seem to be much thought or detail put into this map. It’s literally just a highway with a bunch of cars on it. That probably doesn’t excite you either. My advice here would be to stick to a sub machine gun of your choice since there isn’t any long sight lines and try to avoid sprinting around too much. You’ll easily be found and killed that way. U-Turn should not be played on anything above a 1v1, having played 2v2 here I had to deal with being spawn killed on many occasions which is a thorn in any FPS player’s side. 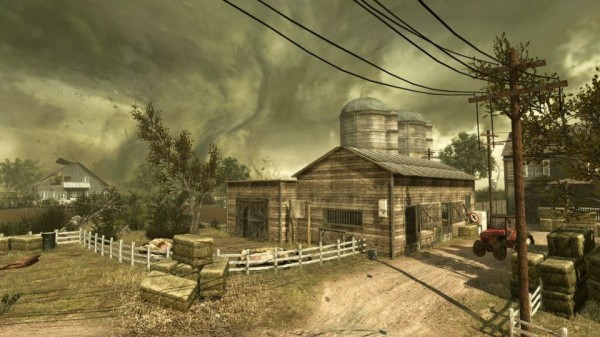 Vortex is the perfect example of what a Face Off map should be like, and is the only shining star out of these drops. With a dangerous tornado brewing in the background for an awesome visual backdrop, you’re placed as either Delta or Spetsnaz as you fight it out on this farm. There’s no inside buildings that you can hide in, outside of a tiny chicken coop, and there isn’t much vertical gameplay to be had here. This is the ideal type of map that all Face Off maps should resemble. Next to Getaway, this is my favorite Face Off map to date. With various lanes that you can weave in and out of, it’s always a surprise where your opponent will end up, which is perfect for a map dedicated to such a small number of players. My advice on this map would be to keep your guard up at all times since there’s major opportunities to flank your opponents. Vortex is perfect for 2v2 combat but could potentially work well with 3v3.

In review, June’s Elite drops seem to be the weakest ones yet as a whole. I didn’t see too many people requesting more Face Off maps, especially over normal Multiplayer maps. With only three more months of content left for Modern Warfare 3, many players just want what got them addicted to the franchise to begin with, more full sized multiplayer maps. To date, we’ve been presented with 7 maps, 7 Face Off maps, and 5 Special Ops missions. It seems like Infinity Ward is doing a good job of balancing the three out. However, if you take a closer look at the entire spectrum, we’ve only seen one new map in the last two months (May and June) which, in my opinion, is completely unacceptable to the Modern Warfare 3 community. With images leaked of future maps like Terminal from Modern Warfare 2 and Shipbreaker found in Playstation 3 1.15 update files, it seems like that is the route Infinity Ward is going to take in the upcoming months, and I’m looking forward to July’s content drops already.

How do you feel about these Elite content drops? Are you one of the many concerned about Infinity Ward’s poor choice of content they’ve provided, or are you happy with these drops and their push with the Face Off game mode? Let us know in the comment section below, and as always, stay tuned to MP1st for all of your Call of Duty news!

Hailing from beautiful Pittsburgh PA, Shawn has spent most of his 25 years playing video games. The original Killzone on PlayStation 2 captured his love for competitive multiplayer experiences and has thrived on that ever since. Now I live, breathe and eat multiplayer madness with the guys and gals of Lucky Strike.
Features, Reviews Arctic Warfare, Call of Duty: Modern Warfare 3, Elite Drops, Featured, Intersection, U-Turn, Vortex
view related posts
HOT MULTIPLAYER GAMES
& UPCOMING RELEASES