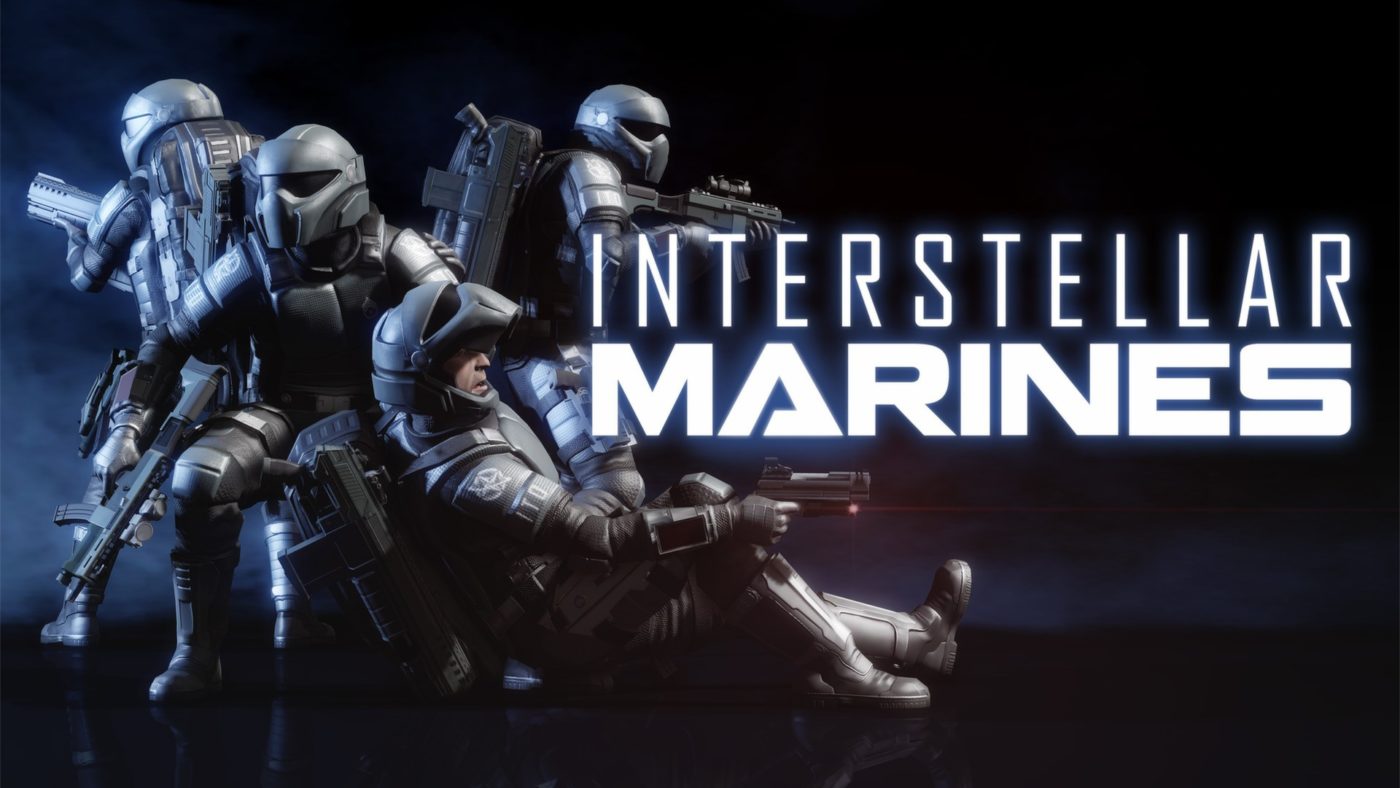 Independent Danish video game developer Zero Point Software is about to move into the next phase of early access for their immersive, sci-fi, first-person combat-survival game, Interstellar Marines, with the introduction of “The NeuroGen Incident.” On September 18, the new gameplay module will focus solely on co-operative, team-based action, offering a new story-based mission that will put to the test the survival and combat tactics of you and three other friends.

Launching on Steam Early Access back in July 2, 2013, followers of the gritty and realistic shooter have been enjoying competitive multiplayer game modes set in a futuristic underground training facility beneath the sands of Nevada. Here, the world’s most elite special forces train to become part of the Interstellar Marines program by learning to adapt and survive against unpredictable environmental conditions and unknown enemies.

With still plenty of work and development time ahead, I had the chance to catch up with Zero Point Software community manager Carsten Boserup — travelling all the way from Copenhagen, Denmark — at PAX Prime in Seattle, Washington to talk about what the near and far future holds for Interstellar Marines and Zero Point.

“Interstellar Marines is currently a multiplayer-only game, but our main focus is actually going to be the co-op,” he added.

The studio aims to drive players forward with a gripping story line and hopes to offer enough customization options that players will be able to shape their marine to fit whatever role they like, instead of being tied down to specific classes.

“It’s going to be a long journey for you as a player because this game is going to be so heavily story driven,” Boserup explained. “There’s going to be RPG elements to it so you will sort of develop your marine into being a, whatever, like, a jack-of-all-trades, you could be a medic in your squad for your friends, the sniper guy, or a heavy guy. You don’t want to have four medics or four snipers. You want to split it up and make sure that everybody serves their purpose.”

“It’s going to take place in a believable future. So, it’s going to be sci-fi, but it’s going be what we call realistic sci-fi — not fantasy sci-fi like what you see in Star Wars. So, something you can actually relate to even today, you know? With the twist of having all the space travel, I guess the best comparison would be with Aliens, you know, the second one, because they’re so relatable. They still have [normal] weapons. They don’t have holograms. They’re just really relatable, but it works really well. You still have the feeling that they’re still pretty advanced, even though they get their asses kicked. But, they have the right gear to do their job.” 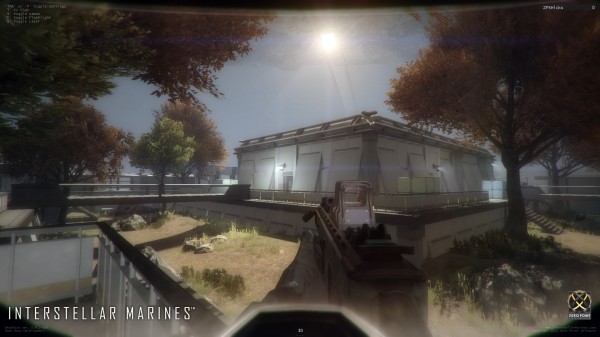 Going hands-on with Interstellar Marines’ training mission at PAX, the first thing that struck me was the believable atmosphere created through realistic use of light and shadows and the function of my soldier’s visor and equipment. To create the most immersive experience possible, Zero Point has placed heavy emphasis on how you use your gear to navigate your surroundings. Your flashlight and laser sight both offer clear benefits, but also have an impact on how enemies react. Meanwhile, your visor, the most useful piece of equipment you have, can also work against you in certain weather conditions or if damaged. Lifting it up off your face may clear up your vision and allow you to communicate better, but it will leave you susceptible to hazardous gasses and in the dark when it comes to pertinent intel.

Boserup gave me a detailed rundown of the sort of role your gear plays in Interstellar Marines.

“You’ll have this suit that’s part of this complete system that counts your weapons, your weapon ammunition type. It counts how you’re performing during this training, because all of this first prologue is actually where you’re training, so part of it is evaluating you. But you’re also going to have all your tactical displays. You’re going to have your proximity radars, pulse meters, different kinds things, tools, intercoms, so you can communicate with your friends just to make you more efficient and still have that high-tech feeling.”

“But it can also be destroyed. It can be disabled. That will leave you, well, pretty much screwed. If you don’t have that, you can’t communicate with your friends unless you open your visor and yell at them. But you also have to open up your visor to breathe, but there might be gasses or low oxygen so you will suffocate or at least be affected by it. Your stamina is affected. Your combat efficiency will be affected. You might not be able to aim properly.”

“It’s going to be important how you engage a target, how you approach, how you enter a room. All these things, you got to have it sorted out with your teammates. Be tactical, stay in formation, don’t cross your line of fire because there’s going friendly fire on and, the enemy, they’re going to be able to suppress you. That’s going to make things more blurry for you, just giving you a hard time.” 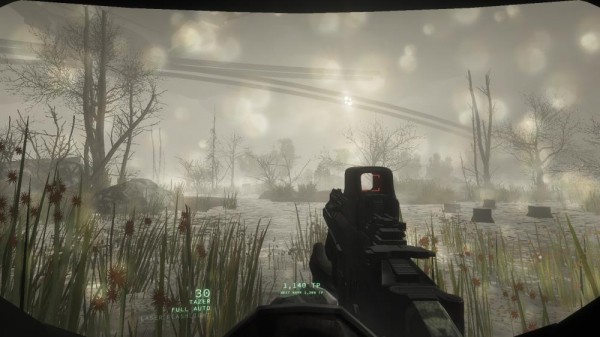 When it comes to certain lighting or weather conditions, Boserup says “It’s going to be able to change randomly from mission to mission and in the same mission.”

“So, sometimes you play it might be different. The AI are going to be reacting to sound and visual, so if you have the flashlight on, they can react to it. But, if they come too close, they can actually have a blinding effect and the laser will also maybe give away your position, but it will help you be more accurate in hip fire. Later on, you can have night vision, and that will be great for when it’s completely dark. But, if somebody turns on the flashlight right in your face, you’ll be blinded and affected by that. So, there’s pros and cons to everything you do and you really have to mind your step and what kind of gear you use for each operation.”

I commented that, just like in real life combat, you’re likely not only concerned about your enemy, but you’re also battling your conditions and environment.

“It’s part of the realism that we’re trying to aim for, even though it’s not realistic that the environment changes, but it’s just part of getting the marine trained for this so they can adapt and survive and complete the job,” Boserup answered. 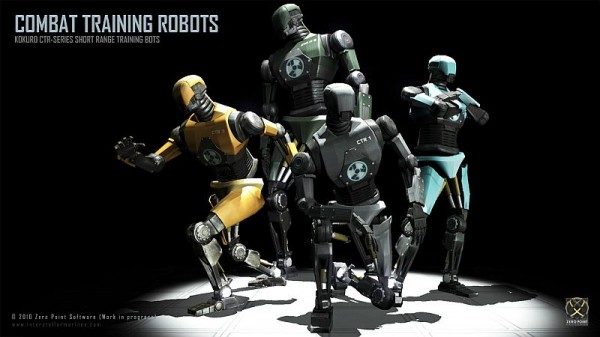 Once I got my bearings and began running in to actual enemies, which, in this case, were aggressive bots that liked to get right up in your face with deadly melee attacks, I quickly learned that they can be quite difficult to take on solo. I asked Boserup for any tips he might have, as I clearly needed them.

“In this one [the training simulator], you’re alone. So, the best thing to do is just be really quiet because they hear you. It’s good to just have an idea — if you go into a room, make sure to just really scan the area, take out the targets. Really prioritize, ‘this guy first, this guy second, and this guy third.’ But that will come from training, that you’re quick enough to take the guy who’s the most dangerous.”

“But, other than that, if you have your friends, you got to do the same. Don’t walk into your line of fire, stay in formation as much as possible, already have agreements; ‘when you go in, you go right, you cover right. When you go in, you go center, you go forward, you cover that. When I go in, I got left. You don’t have to worry about left because I got that covered. And If I go down, the guy behind me, the medic, he better pull me back.’ It means the squad maybe has to pull back a bit so we still can keep that cover, but just this time only two guys.”

I then asked what type of enemies we might encounter in some of the upcoming missions.

“In this simulated training environment, there’s going to be genetically modified creatures. That’s actually part of the story line in this prologue, where they’re sort of trying to kill you to find the best of the best. That’s how it works. So, you might be shooting taser rounds when you’re fighting, training against other marines, but that’s because you’re not supposed to kill each other. But, the final test, the final exam, you might end up dying. There’s going to be the robots again, they’re going to be humans, hostages, security robots — with weapons and just purely melee. So, it’s just a great simulation training environment that should prepare you for the other campaigns that are coming later on where you actually go on live missions. That’s where you’re going to fight space terrorists, pirates, etc. You’ll fight other soldiers, mercenaries, aliens at some point maybe, like creatures on foreign planets.” 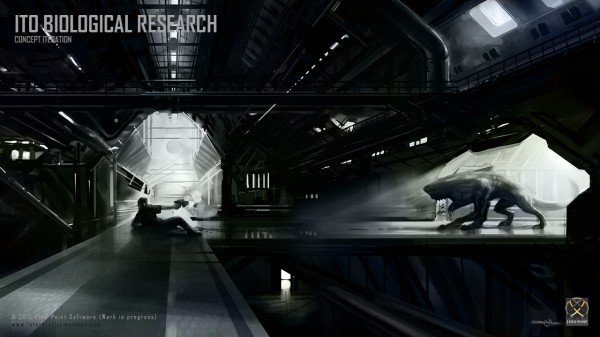 If there’s one thing I took away from my conversation with Boserup, it’s that Zero Point Software has a pretty robust and ambitious plan set in place to ensure a content-filled future for Interstellar Marines, an approach that was inspired by a little game you might know.

“We’re really inspired my Minecraft, where it’s just pretty much in development all the time but you add stuff and that,” Boserup told me.

“But, we’re going to be in early access for a long time. The things are going to be better. It’s going to be more polished, more optimized. There’s going to be more content, missions to play, and, at some point, actual campaigns. In our minds, right now, I think when we have all the campaigns, then we go full release. When the package is complete, then you have the release.”

Interstellar Marines development is currently purely focused on PC, Mac, and Linux, but it doesn’t mean that Zero Point is throwing all possibilities for a console port out the window.

“We’ve been getting requests to go on other platforms and, at some point, we’ll have to decide later on,” Boserup explained.

“At this moment, the focus is on PC and on Steam. We get a lot of requests on getting the controller support in, so we’re probably going to get it [in]. So, hopefully we can support all the people who will play this game because, I mean, it has the pacing — you could play it with an Xbox. It’s not a run-and-gun game. There’s time to be tactical and I think that the controller would work really well in this game, especially the co-op.”

With that, there are no plans for cross-platform play, however.

“I’m not sure how it would work with controller versus guys playing on mouse and keyboard,” Boserup admitted. “There might be a small difference in reaction time. I know there are guys who are really good with a controller, but I haven’t seen them beat a PC mouse and keyboard guy yet.”

You hear that, console scrubs? Sounds like a challenge to me.

All kidding aside, you’ll find Interstellar Marines on Steam for $18.99. If you want to secure a unique honorary game profile, a spot in the Hall of Honor and game credits, all future updates, the original soundtrack and all future soundtracks, a digital art book, and one extra Interstellar Marines key to give to a friend, you can also get the Spearhead Edition for $43.99.

For more on Interstellar Marines, keep your flashlight and laser sights on MP1st.