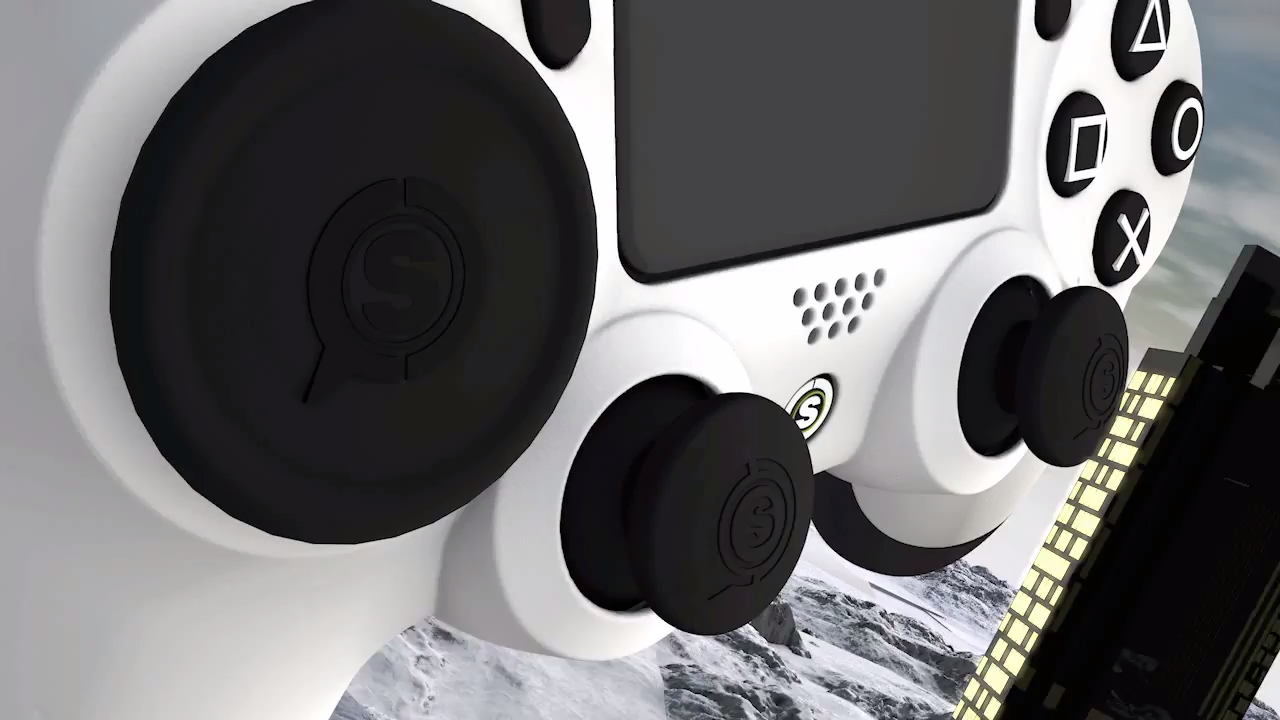 With PlayStation becoming the new home of Call of Duty eSports and Sony securing early Call of Duty DLC launches starting with Black Ops 3, the temptation for fans of the series on Xbox to jump ship is at an all time high.

Falling into this category myself, and as a long-time user of third-party Xbox controllers like the SCUF Hybrid and SCUF One, it was time to consider new input options for the PlayStation 4. Like the Xbox One game pad, Sony’s DualShock 4 checks-off a number of improvements over the previous generation’s offering, but also lacks essential options that many modern FPS console gamers might consider a requirement today. Clumsy thumbsticks, a lack of good grip, and the awkward juggling between thumbsticks and face buttons are hurdles competitive gamers must jump and that companies like SCUF Gaming try to overcome.

In light of this, SCUF recently sent over a SCUF 4PS White PlayStation 4 controller for us to take a look at and determine whether or not their solution to these ‘gamer problems’ are up to snuff. With enhanced movement in shooters becoming the norm and games like Call of Duty: Black Ops 3 on the horizon, the timing couldn’t be any better. 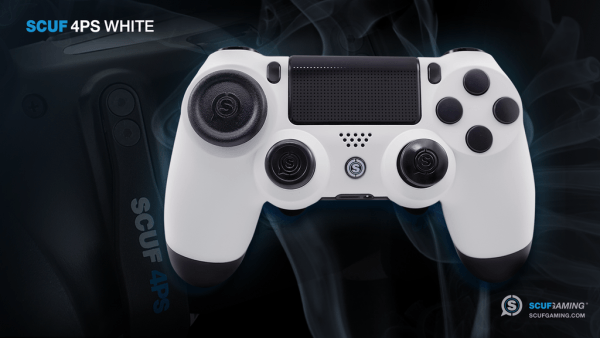 Of course, the benefits of a customized DualShock 4 controller will reach beyond the realm of Call of Duty and potentially pique the interest of anyone looking for a more comfortable and option-rich input device. So what exactly does the 4PS offer and is it worth the premium price tag?

Perhaps its most alluring and ‘game-changing’ feature is what many gamers come to SCUF for in the first place: rear-saddled button paddles that give the user an alternative way to input frequently-used commands without the need to press any face buttons. FPS gamers know the frustration of having to give up the ability to aim with a thumbstick in order to reload a weapon, jump over an obstacle, or quickly dash around a corner in-game without having to resort to uncomfortable grip positions like ‘the claw.’

The 4PS Pro Paddles are wide enough to accommodate most finger lengths and are placed far enough into the center of the controller to avoid any accidental presses. The slight curve at the tip also provides a good enough grip to prevent any slippage. They might take some time to get used to if you’re coming from a standard controller, but once it’s ‘under the fingers,’ there’s no going back.

On a standard 4PS, paddles come mapped to the X and O buttons, but that option can be customized in the online order process. Those who value versatility might also want to consider the Electro Magnetic Remapping option to switch paddle functions on the fly. 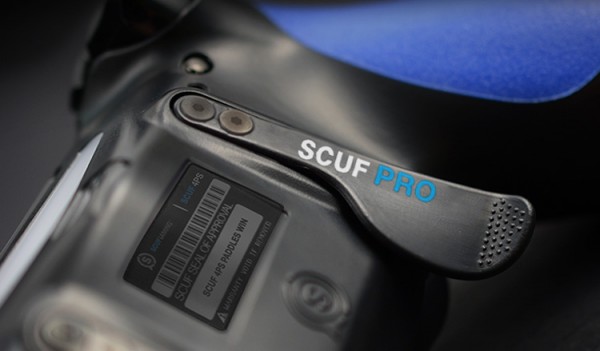 If finger gymnastics aren’t your thing, the SCUF Pro Paddles are an invaluable tool in any pro gamer’s arsenal. In addition to the comfort of rear inputs, a major benefit many high-level gamers look for in a competitive controller is the level of grip it provides, both in the hands and under the thumbs.

The 4PS’ Pro Grip doesn’t cover as much surface area of the controller’s backside as it does on the SCUF One, but its placement precisely where the bottom knuckles of the middle, ring, and pinky fingers grip the handles is more than enough to do the job. I found it especially helpful a few hours into an intense gaming session when the perspiration begins. Like the Pro Paddles, the Pro Grip ships with every SCUF 4PS and can also be customized.

It’s about that time, when the fingers become moist and your thumbs begin to lose grip, that the standard DualShock 4 thumbsticks can be quite difficult to keep in control. Thumbstick customization on the SCUF 4PS reaches far and wide with multiple length and style options. But, more importantly, they’ll obey your movements with more precision thanks to their grippy texture, even under sweaty thumbs. My particular model shipped with medium-length concave sticks, which my thumbs fit into very nicely.

Style and length will depend on preference, though it’s generally understood that a longer aiming stick will yield more accurate results in-game by giving the user more room to make more precise movements. If your thumbs can make the reach, the 4PS’ longest domed stick measures in at over 20mm.

My only wish is that the 4PS allowed users to easily swap thumbsticks in and out they way SCUF’s Infinity1 does to allow for more experimentation without having to replace an entire controller. Perhaps in a future iteration or two, that will be the case. Regardless, SCUF’s sticks are a clear winner over the DualShock 4’s slippery pads any day.

As someone who’s primarily enjoyed FPS games on the Xbox 360 and Xbox One, I can really appreciate the optional SCUF Fangs that attach to and elongate the DualShock 4’s L2 and R2 triggers. Naturally, my fingers would rest a little further down the regular triggers, near the tip, which meant I would occasionally slip off with the right amount of force. I found the Fangs allowed my trigger fingers to act on their tendency to drift downward without having to make any re-adjustments. On top of that, the additional grip also led to a reduction in slippage overall. They’re not vital to performance if you’re already used to the DualShock 4’s L2 and R2 set-up, but you may want to consider them if you also find the standard triggers a tad too short.

For Fighting and Sports Games enthusiasts, the the removable SCUF Control Disc is another option that sits on top of the DualShock 4’s d-pad and helps smooth out directional inputs, though we have yet to test this specific feature for ourselves.

SCUF’s controllers can also be ordered with a SCUF Protection Case that fits both the controller and a standard charging cable. It’s included in the SCUF Player Pack which also includes a 10ft. Braided Charging Cable, a bottle of GamerGrip Gaming Edition, and a SCUF Key Chain. 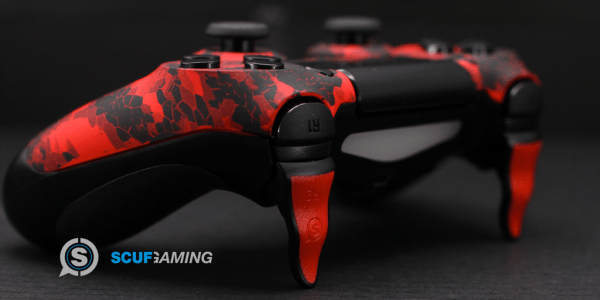 In our experience, while the SCUF 4PS is a premium product with a premium price tag (starting at $119.95 USD), it works exactly as advertised and you get what you pay for. Imagining for a moment that your skill as an FPS player remains constant, your kill-to-death ratio will improve by taking advantage of its tools. Elongated thumbsticks with better grip enable a higher level of precision, assigning commonly used face buttons to paddles means moving and aiming are no longer mutually exclusive, and a more comfortable and sturdy grasp on your controller and triggers means more efficient input with less room for error.

Ultimately, it’s up to you to value these options and decide if your in-game performance is worth investing into. If you’re enthusiastic about competitive gaming on PlayStation and dedicate a portion of your disposable income to your hobby, the SCUF 4PS is a no-brainer. At the very least, it’s nice to have quality options like SCUF in the relatively narrow console peripheral market, compared to the ocean of customizable mouse and keyboard products PC players have at their fingertips.

In any case, if your sights and wallet are set on a high-quality, option-rich, and highly customizable input device for the PlayStation 4 that will have a positive effect on your performance and comfort, we strongly recommend the SCUF 4PS.

This product review was based on the SCUF 4PS White for the Sony PlayStation 4, provided by SCUF Gaming. Visit their website at scufgaming.com.