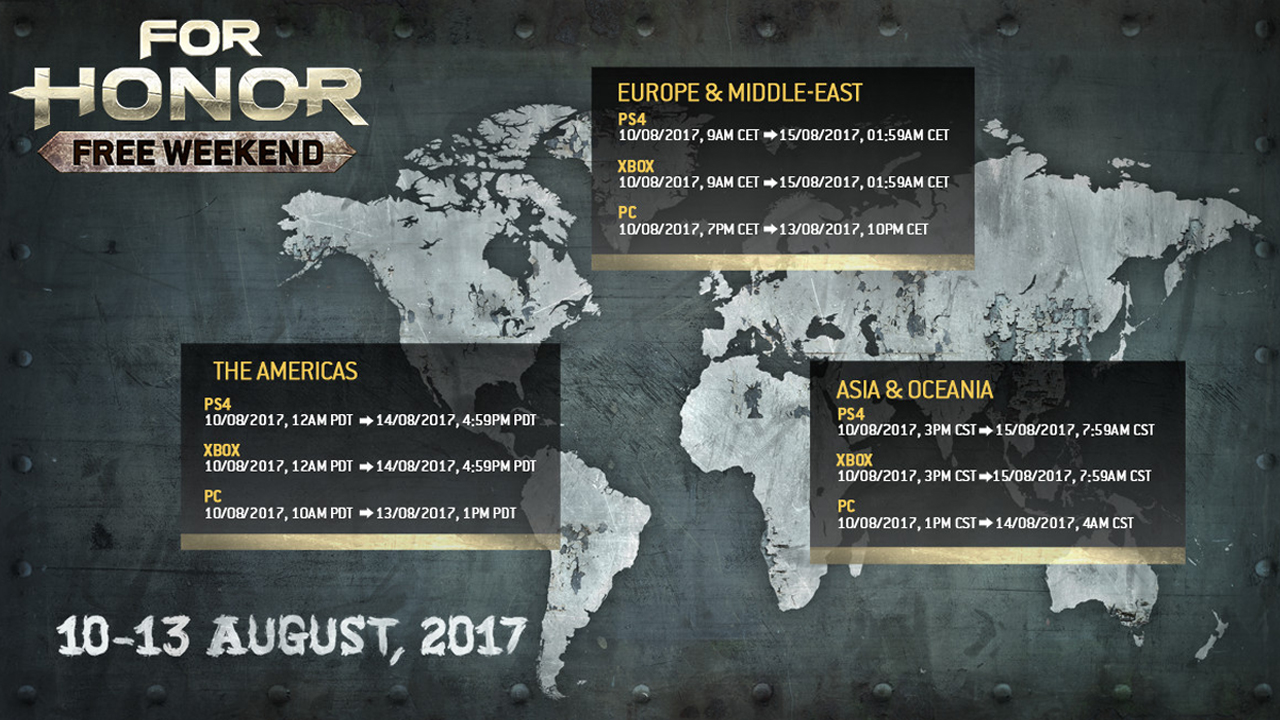 Those who haven’t yet picked up For Honor will get the chance to try it out for free this weekend. As for those who have already picked the game up, well you should be excited too, as there’s a massive influx of noobs incoming!

Here are the times when the trial will be available to play:

If you’re on PC, remember that For Honor is only accessible through Uplay PC. Those on PS4 will find the trial in the PSN Store, while Xbox One owners will spy it sitting amongst the “Games with Gold” section of the marketplace.

To take part in the free weekend, PS4 users will require PS Plus, while on Xbox One you’ll be needing Xbox LIVE Gold. PC players can play unhindered.

The For Honor free trial can be preloaded on PS4 and PC from August 8 onwards. Those with an Xbox One will have no such luxury.

Any progress you make during the free weekend will be transferred over to the full game, should you decide to buy it.

In addition to the “Free Weekend” trailer, Ubisoft posted a tease at the upcoming “Grudge and Glory” update. You can get a glimpse at the new Highlander and Gladiator heroes in the clip above.

Here’s what’s coming to the game on August 15:

“Grudge and Glory” will bring the largest updates to For Honor to date with the introduction of new heroes, maps, gear, ranked play and a wealth of gameplay updates. All maps and gameplay updates will be free for all players at the start of Season Three. The new heroes, the proud Highlander and the deadly Gladiator, will be available free for Season Pass holders on August 15, while all other players will be able to unlock them in-game on August 22 for 15,000 Steel.

The never-ending war between Knights, Vikings and Samurai welcomes two new deadly Heroes into the fray:

• Highlander (Viking [Class]) – Stoic and guarded, Highlanders are patient heroes capable of switching between two different fighting forms. Their defensive form allows for counter-attacking and trading blows, while their offensive form empowers them to unleash their deadliest attacks at the expense of being able to block. Wielding the heaviest and longest sword in the game, the Highlander’s massive claymore gives them a deadly combination of strength and range.

• Gladiator (Knight [Class]) – Wielding a trident and shield, the Gladiator has made a living off of killing for sport, they now bring their ruthlessness and skill to war. Fighters by trade, they are brash and boastful; equipped with little armor, they can punch their opponents to create separation to set up attacks and stuns. Their larger stamina meter and reduced cool down times make them extremely agile and dangerous opponents.

There’s a lot happening in For Honor! Will you be giving the trial a go? Or, perhaps you’re already an experienced warrior and looking forward to the “Grudge and Glory” content? Let us know.