A few hours ago, we reported on the fact that PS3 paid Elite owners will have access to the DLC maps before regular 360 owners. While our report was based on the info provided by one of Activision’s own, Mikey Vega, it appears that he has pulled back his statement by deleting the tweet our report was based on. Fortunately, we were lucky enough to anticipate such a move, so here’s the URL to the deleted tweet and a screen capture. 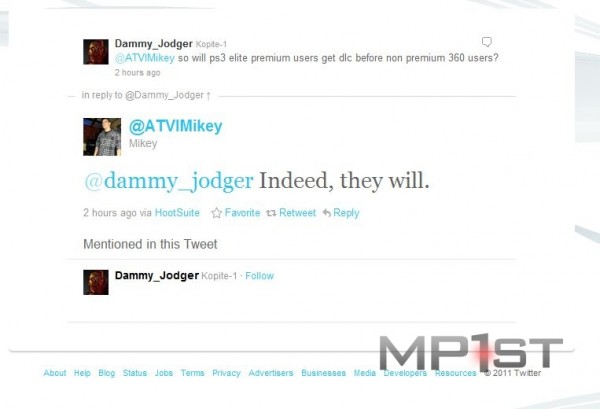 Basically, we are back to square one with only the two known constraints:
1) Paid Elite Xbox 360 owners will have access to the DLC on January 24th.
2) All DLC will be made available to regular Xbox 360 owners one month ahead of PS3 and PC owners.

It turns out that Mikey jumped gun when he stated that PS3 Elite users will be getting the DLC earlier than regular 360 owners. He explained, “I’m sorry for the confusion. I don’t know 100% how it will work. What I stated was my assumption.” He went on to say that we will learn more of how the Elite release schedule will work in January.