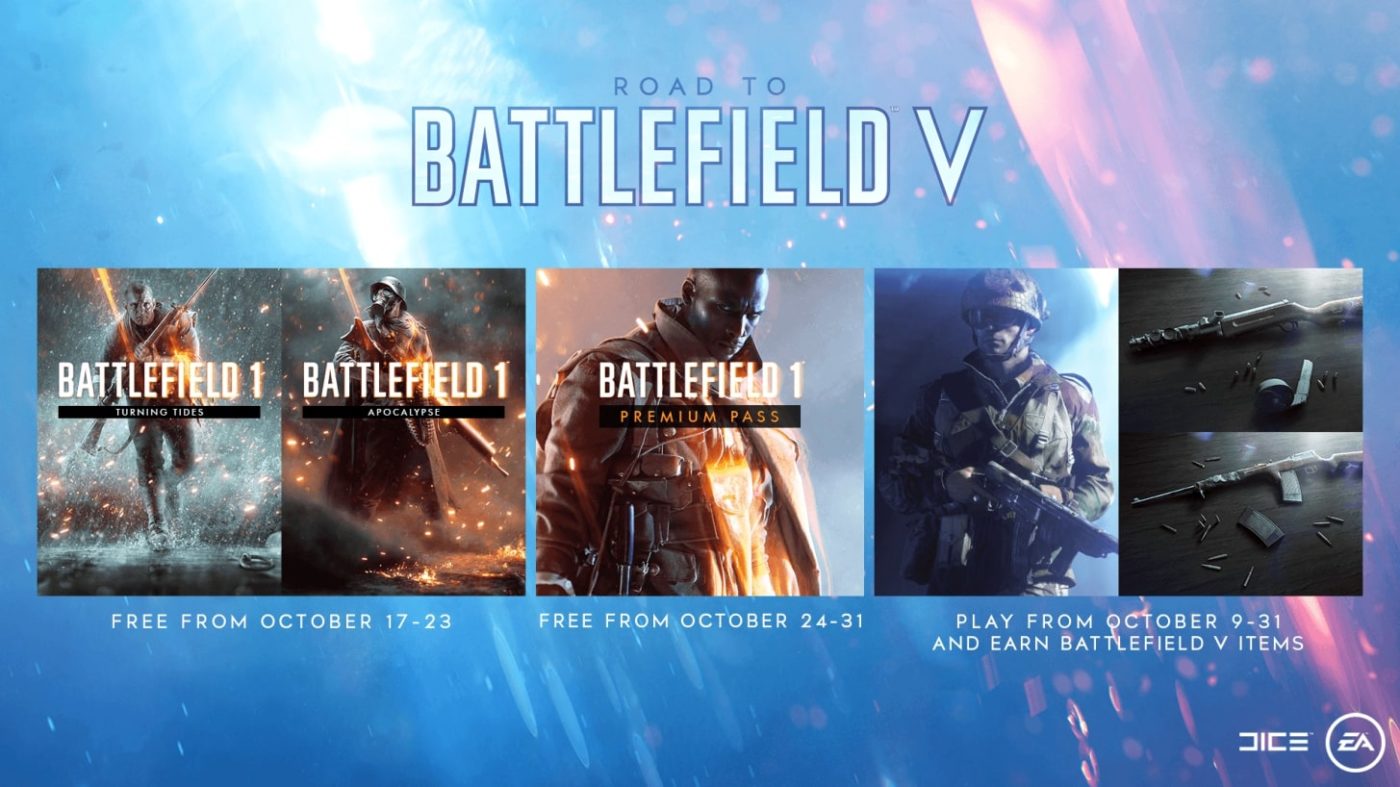 As part of EA’s continuous marketing of Battlefield V, the publisher is letting players get a taste of the Battlefield 1 experience by offering Battlefield 1 free DLC for the week! BF1 expansions Apocalypse and Turning Tides will both be playable from October 17-23, 2018!

Info regarding the two limited time free expansions can be seen below. (via EA)

Stage 5 rolls on with the Battlefield 1 Turning Tides expansion. Players can experience what it was like to fight in the 1915 British amphibious assault of the Gallipoli peninsula, deploying alongside the Royal Marines.

Relive massive battles on land within the maze of desert canyons of Achi Baba, choke point-heavy Zeebrugge, and two additional maps. Own the seas as the L-Class destroyer, M.A.S torpedo boats, and Heli blimps. Or drop death from above with the massive C-Class Airship.

The expansion also delivered six weapons and two melee weapons to wipe out enemies. Head over to the Battlefield 1 In the Name of the Tsar page for a full breakdown.

The Great War’s most brutal battles come to life across four maps in the Battlefield 1 Apocalypse expansion. Try to survive on the once quiet and peaceful village of Passchendaele, now ravaged by weapons built to end the war. Trench networks, ruined houses, and abundant shell craters litter the infantry-focused killing field. Also, prepare for open warfare on the River Somme map with clear trench line battles of soldier versus vehicles.

The expansion lets players equip a bevy of new guns, gadgets, and aircraft, such as the brutal Broken Bottle, Anti-Air Rocket Gun, and Howell Automatic rifle.

Visit the Battlefield 1 Apocalypse page for a complete breakdown of this expansion.

What’s more, the Road to Battlefield V: Weekly Rewards are continuing as well, with this week’s reward set as a Battlefield V soldier token! For the full list of weekly rewards, check it out here.