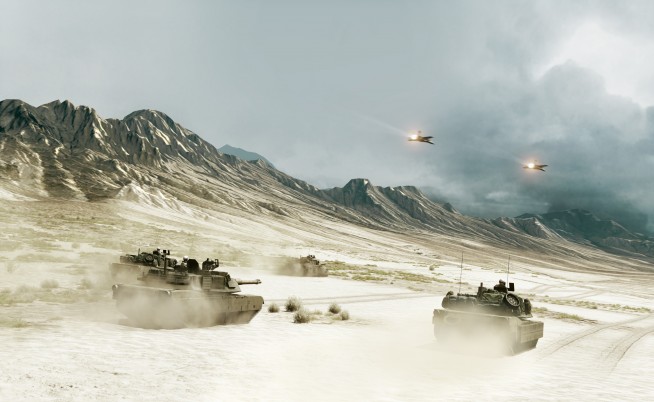 You may remember back in the developmental stages of Battlefield 3 that DICE showed intent to craft their title to be a contender in the e-Sports community. A few weeks after it’s released, have they accomplished what they set out to do?

Many e-Sport athletes(?) would argue “no,” at least not in its current state. Battlefield 3 is a game of highly tactical, team-oriented and competitive nature, so why does it not stand out as a e-sport title? So far, the Battlelog has done a lot to support clans by including “Platoons” as a way to organize squads. However, it would be great if it were possible to schedule events through the Battlelog or even formally and publicly challenge other platoons to a match or tournament which would show up on the battlefeed. Of course, what good would it be challenging another platoon if you can’t record your matches. DICE has talked of a battlerecorder making it into BF3, but we have yet to hear any details or updates on the matter. Another great addition to recording would be some sort of spectator mode. This would be great for commentaries and being able to view the entirety of a match from all perspectives. Lastly, though it has already been confirmed to eventually make it into the PC version of BF3 and hopefully in the console version as well, the commo-rose will be a great addition to team communications.

For now, DICE leaves us with some hope of these features making into Battlefield 3.

Recently, fans have been asking Global Community Manager, Daniel Matros, what DICE’s plans are to bring Battlefield 3 up to par with other e-Sport titles. Though he could not go into great detail, he did mention that “…we are hearing the competitive community…” When asked if there is any way to hide the in-game HUD and weapon, Matros responded, “not right now but considering the post launch updates and plans we have, all feedback is considered to be very nice .” Lastly, in a community podcast with Don’t Revive Me Bro, Matros, as well as Senior Gameplay designer, Alan Kertz, spoke of the future of Battlefield 3 and e-Sports. Mentioned in this podcast was that DICE is still working on making sure the game is in pristine condition before entering the e-Sport scene. On top of that, DICE want’s to give the community time to learn the game in every aspect and in all it’s little details.

So, though Battlefield 3 may not be the hippest cat on the e-Sport scene at the moment, things are looking to change. Let us know your thoughts in the comment section below and don’t forget to follow MP1st on Twitter and Facebook!

Make sure to check out some other updates that will soon be making it into Battlefield 3!

BF3 Patch Details: Mortar Solutions, IRNV Glitch and Other Bugs To Be Fixed