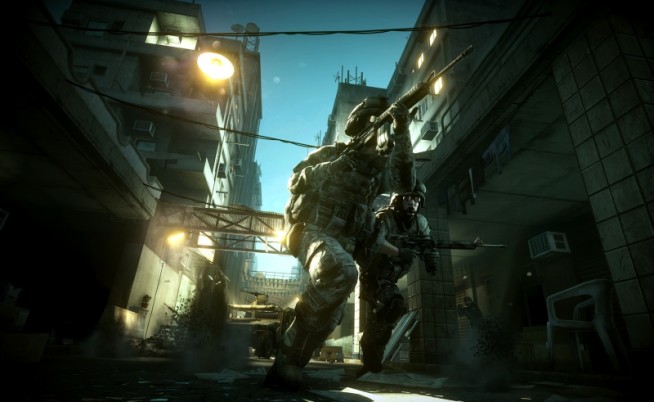 Battlefield 3 is all about the multiplayer; more specifically, the competitive multiplayer. It’s where most of the fun and addicting moments are had. It’s so fun and addicting, in fact, that it’s all too easy to forget about the two other modes BF3 offers: single player and co-op. Personally, I really enjoyed the SP experience, but I can easily see why gamers would want to forgo it in order to spend more time unlocking sweet stuff in the competitive MP. However, you may have noticed by now that some of the sweetest stuff you can unlock in the MP is only achievable through the co-op game mode. This is possible by accumulating high scores with your partner throughout the 6 missions that are initially available.

At first, this sounds like a reasonable attempt to entice players to try co-op with others, until you realize exactly how much time you need to spend here in order to unlock some of the later MP weapons. For example, if we take the engineer’s SG553, you’ll notice it takes 378000 co-op points to unlock while the total XP points needed for the engineer’s first service star is only 145000. It would make sense if we were forced to earn that many points with the engineer class in the MP, but instead, we are forced to grind in the co-op. And, let’s be honest here, no one should have to play each co-op mission more than once or twice in order to unlock every weapon. There are just simply more important things to do in Battlefield 3.

On to some interesting news. If you’ve been neglecting the co-op, but still have the intention to eventually unlock those weapons, it might be a good idea to hold off for a while. Fredrik Thylander, Senior Designer at DICE, was recently asked if it was intentional that we would have to grind this much in order to unlock those weapons. He surprisingly responded, “nope. And its getting nerfed.” No further details have been provided, but it looks like we’ll finally soon be seeing more players with the G3A3 on the battlefield. This will most likely come in the form of a patch which seems to already be in the works. You can check out details here!

Jets and Pistols and UMP-45 Adjusted

For now, I leave you with a list of all the MP weapons achievable through co-op, how many points it takes to unlock them and their descriptions from the Battlelog. These scores should be changing in the (hopefully) near future!

Developed for export in Russia (REX stands for Revolver for Export), the MP443 is a compact .357 Magnum handgun with an interesting tilt open and auto extraction design. While not as powerful as the .44 Magnum, the .357 Magnum round from the MP412 offers excellent stopping power and the compact package offers a slightly higher rate of accurate fire.

Another contender for the newly developing PDW market the MP7 is currently in service with the German Bundeswehr and the Norwegian Armed Forces. The MP7A1 includes an improved stock, additional safeties, and added rails for mounting lights, lasers, and sights. The weapon is also capable of being suppressed, giving it excellent close combat stealth performance.

A modified version of the M9 pistol, the 93R is able to fire in 3 Round Bursts. The 93R is equipped with a forward folding fore grip and an extended barrel which is ported to reduce recoil. Trained shooters are able to fire busts in rapid succession, and the pistol is typically seen in service only with elite special purpose units.

This Iranian developed Assault Rifle is essentially a bullpup conversion of the M16. The KH2002 is intended to replace the G3 in service with the Iranian armed forces, though there is speculation that it may be years before the rifle is ready for full deployment. The KH2002’s short length lends itself well to close combat, but prevents it from mounting any underslung weapons.

The G3 rifle is one of the most widely fielded Assault Rifles in the world. Multiple versions of the G3 exist, and it has been used in countries around the world, including Sweden where it was known as the AK4. This particular G3 is the A3 variant, with a fixed stock. The long barrel and firing heavy 7.62x51mm NATO round enable the G3A3 to reach out at longer ranges than most other Assault Rifles, but at the cost of heavy recoil.

A Carbine variant of the Swiss Army’s standard SG550 rifle, the SG553 improves over its predecessor the well-known SG552 by including integrated rails for mounting accessories. A Carbine with excellent ergonomics, the SG553 is capable of Automatic, 3 Round Burst, and Semi-Automatic fire and is an excellent close range weapon.

The M39 Enhanced Marksman Rifle (EMR) is a highly modernized M14 designed to be utilized by USMC designated marksmen. Issued with match-grade 7.62mm NATO long range ammunition the M39 is significantly lighter and more accurate than the original M14. The M39 is limited to Semi-Automatic fire, but supports a number of accessories including a standard Rifle Scope (8x).

The Life, Death and Rebirth of Competitive Halo