Battlefield 3 developers DICE are busy fine-tuning and testing motor-bikes – motor-bikes you’ll be riding in End Game, that is, Battlefield 3’s last expansion pack due out this March. 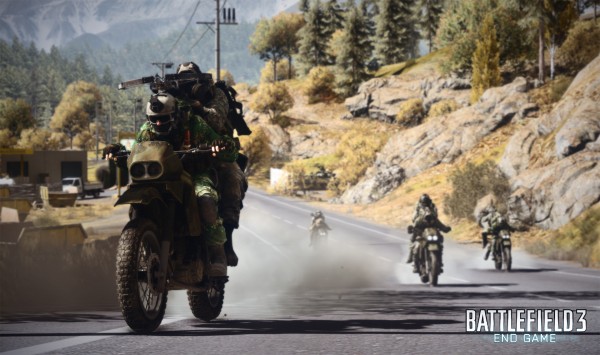 As childish as it might sound, getting the jumps on End Game’s maps just right was an important aspect of her work. It’s important to maneuver the battlefield quickly and fluidly in order to keep the fight’s momentum going. To ensure minimal frustration on the player’s part, Malin needed to ensure that players weren’t crashing in awkward spots on the map when going for that sick air. One instance of this was on “Operation Riverside,” around the “mega jump.” Play testers were often crashing in a ditch hidden by the jump itself. Here’s an example of how she fixed the tricky situation.

Malin mentioned that not all jumps on each of the four new maps are so obvious. While jumps on Operation Riverside might be made clear by metal ramps supported by dirt piles, Kiasar Railroad, for example, features jumps that are “molded with the landscape and often made out of wooden planks laid out on dirt mounds. This encourages players to explore the levels to see if they can find all the jump spots,” she writes.

Check out the DICE QA team testing out some jumps below.

While the two previously mentioned maps – Kiasar Railroad and Operation Riverside – are two of the more jump-centric maps, Malin writes that “the other two maps – Nebandan Flats and Sabalan Pipeline – rely more on using the skills you have learned on the constructed jumps on the raw terrain. I have personally had lots of “Battlefield Moments” during playtests on these maps. My knowledge of what I can make the motorbike do has saved my skin more than once. So don’t be fooled if you have a hard time spotting jumps on those maps. They are there, just a bit more hidden.” 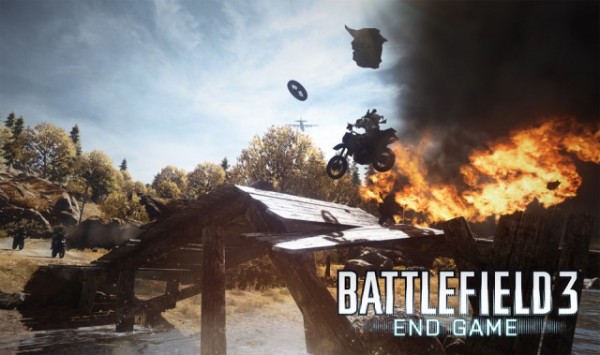 If you haven’t yet, make sure to read up on the new dropship and AA vehicles. You can also catch the latest Capture the Flag gameplay trailer here.

Does the sound of catching some sweet air with the brand new motor-bike in End Game have you excited for Battlefield 3’s last expansion pack?