First, in a recent blog update, developer DICE has confirmed that Second Assault will be coming to the PC, Xbox 360, PS3, and PS4 on February 18 first for Battlefield 4 Premium subscribers, two weeks later for non-Premium subscribers. This falls in line with previous rumors of the expansion’s release date.

Moving on, Battlefield’s official website has a fresh batch of details on the game’s third multiplayer expansion, the water combat-based Naval Strike.

“Blow open a crashed passenger plane and capture fishing villages across the tropical Lost Islands. Drop a submarine on your foes as you infiltrate a naval base or rush between shipping docks and rocky islands on the massive Wave Breaker map. Wage war across stormy seas in the largest ocean stretch in a Battlefield map yet with Nansha Strike. Storm an abandoned cliff-side resort, or get lost in the breathtaking vistas in Operation Mortar.”

Most exciting is that Naval Strike will offer up a fan-favorite game mode originally introduced in Battlefield 2142 called Titan Mode, only in Naval Strike, it is reintroduced Carrier Assault. Check out the full list of key features below:

No launch date was given for the new expansion.

UPDATE: Take it with a grain of salt, but according to one user’s Battlelog, Naval Strike is set to launch on March 30. If anything, it make indicate that Naval Strike is on course for a late March launch. 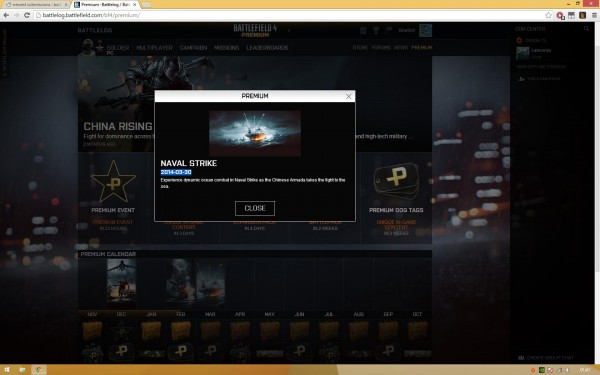 Excited for more war at sea with Naval Strike? Were you a big fan of Battlefield 2142’s Titan Mode?