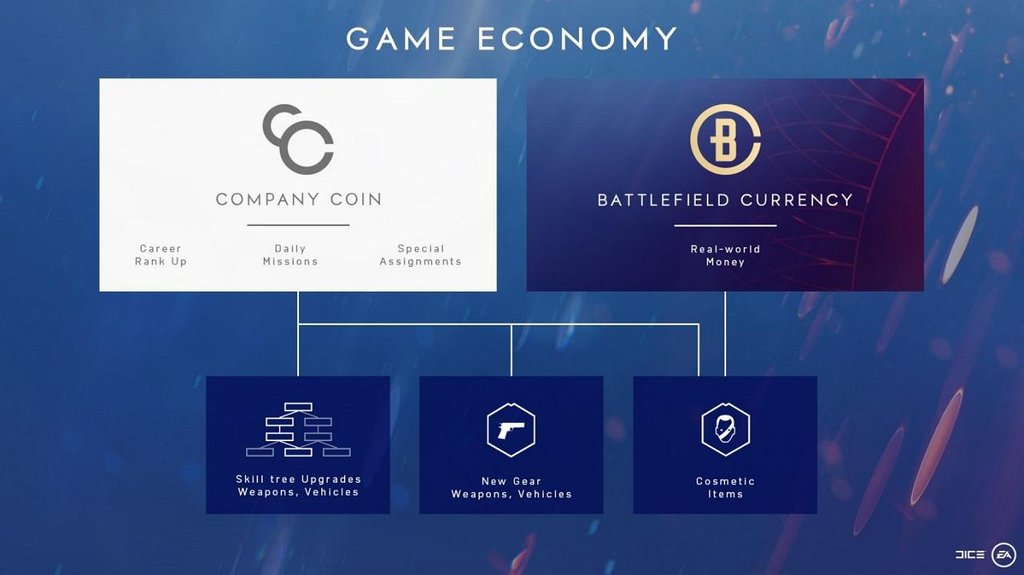 Battlefield 5 Currency Release Date Set for Tomorrow, Here’s an FAQ About It

Announced even before the game’s launch, Battlefield 5’s in-game currency called “Battlefield Currency” or what the community refers to as “Boins” will be available in the game starting tomorrow when the patch drops.

Before anyone panics, Battlefield 5 currency will only be used for cosmetics and what EA calls “time savers, which will help those strapped with time (or just lazy) to obtain the chapter reward items, XP boosts and more.

Check out the full FAQ regarding Battlefield Currency below (via EA).

Battlefield Currency can also be purchased in first-party stores for your preferred platform.

Elite sets and time savers will not be available on April 4 but will arrive later in Battlefield V.

Cosmetic Items
Today, you can get cosmetic items of all rarity levels through direct progression, such as Chapter Rewards or Career, Class, and Weapon Ranks. You can also get other Common, Uncommon, and Rare items through Company Coins.

Looking ahead, we will continue to release new cosmetic items that can be obtained through direct progression, Company Coins, and/or Battlefield Currency. We want to give every player a chance to access new cosmetic items, whether they choose to spend real-world money or earn content through gameplay.

The Elite
Coming in Chapter 3, we’ll be introducing something new to Battlefield: Elite sets that let you play as a distinct soldier in multiplayer modes, including Firestorm. Each Elite is a unique character with a name and background. They consist of a themed assortment of cosmetic items, character voice overs, a Best Squad animation, and an exclusive Special Assignment that helps bring to life the story of the Elite and unlocks a signature melee weapon.

Elites play like any other soldier and do not grant any type of gameplay advantage. We’ll provide more details on our first two Elites, Seamus and Ernst, closer to their arrival.

Time Savers
Later this spring, we’ll be introducing two types of time savers that can be acquired with Battlefield Currency: Tier Catch-Ups and XP Boosts.

Tier Catch-Ups unlock Chapter Reward items, providing an option for those players who don’t have the time to earn all those items through gameplay.

XP Boosts accelerate the amount of experience points you earn while you play, allowing you to reach Chapter, Career, Weapon, Vehicle, or Class Rank at a faster pace.

Are There Other Ways to Use Real-World Money?
Yes. In addition to Battlefield Currency, you can use real-world money to get value bundles. These bundles are available for limited times and can contain a mix of cosmetics, currency, time savers, or other items. The contents of a bundle will always be listed so you know what you’re getting before you make a purchase.

Starter packs are one example of a value bundle. Let’s take a look.

I know, I know, microtransactions and the like aren’t welcome in games, but at least they won’t affect gameplay in Battlefield 5, right? Once the Boins and the patch are up, we’ll let our readers know.

Make sure to bookmark our Battlefield 5 game hub for the latest news regarding the game.