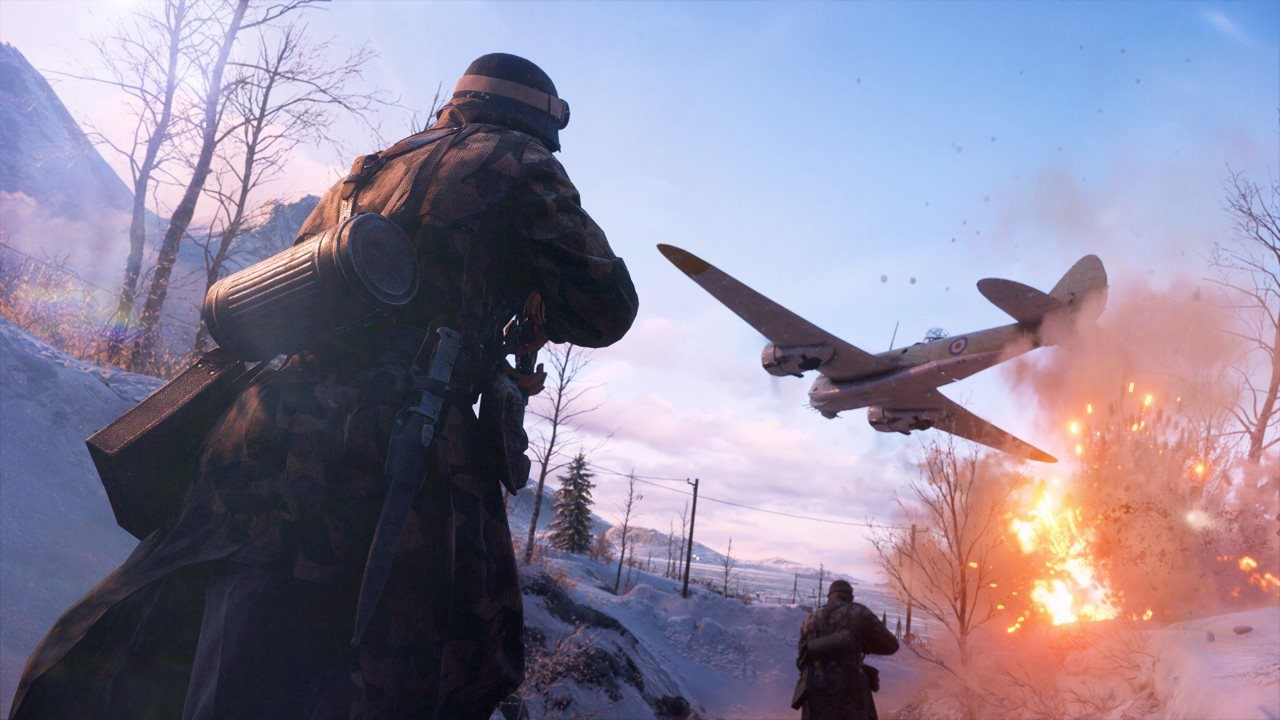 You can read the condensed version below, but the super long one can also be read in this pdf file (warning: it’s a long read).

Updates Made to Weapons
There are two major pillars when it comes to Battlefield V weapon design. We wanted a clear distinction between weapons. We’ve also worked towards a grounded, physical gunplay system, which can be mastered and learned. To achieve this, we’ve done tweaks in several areas, including the below.

Change List
● Fixed an issue where the sights on the ZH-29 could get misaligned.
● Fixed visibility of shell ejection when ejecting last shot from Lee Enfield No 4 (You no
longer see two casings being ejected).
● Players can now re-spec their weapons in the pre-round phase.
● Players should now be able to deploy with all weapons / customization items that the
player has unlocked and selected.
● Sten Gun is now able to equip standard sights.
● Suomi KP-31 is now able to equip standard sights.
● Kar 98K no longer has double crosshairs when using the long scope.
● Medium scope is now default for sniper rifles.
● Updated the FG42 to be open-bolt.
● Fixed an issue with medium scopes that could results in unintended blur.
● Added reload sounds for all cannons.
● Improvements to the finger posture of the left hands while holding an M1 carbine.
● Slightly improved LMG accuracy under sustained fire.
● Corrected the ZH-29 bullet placement in the chamber.
● Fixed various camera issues for the MP28.
● Upgraded the firing sounds for the Winchester 1907.
● Upgraded the firing sounds for the MP34.
● Added fire mode selection for Sten and MP34.
● Improved the firing sounds for the Browning A5 and Remington Model 8.
● Improved the audio for the Krag Jorgensen.
● Fixes and improvements to the hit indicator and knife kill sounds.
● The STEN V recoil has been tweaked for more consistent first shots and higher ease
of use during longer bursts.
● Improved the modelling on the stationary machine guns and its individual parts.
● New much nicer looking tracers for weapons, includes different types for weapon
types etc.
● Fixed flicker from the vignette effect turning on incorrectly when zooming in with medium
scopes.
● Improved visibility of sniper scope glint.
● Shotgun tracers have been made subtler.
● Slowed down the Enfield’s bolt action to be slower than the Kar98k.
● First bullet after releasing the trigger is now always tracer.
● Modified trace frequency for all fully automatic soldier weapons. Every third shot for
MMGs, every other shot for the rest.
● Increase reflex sight opacity, glow strength. The reflex sight was hardly visible on
desert/bright maps and foggy weather.
● Hipfire dispersion increase tweaked. LMGs, SARs and SLRs increase less, ARs
increase slightly more.
● Removed snap-aim assist from controller inputs.

Rolling Out Vehicle Tweaks
In Battlefield V, we wanted to do the iconic vehicles of World War 2 justice, infusing them with the character and feel of their real-life counterparts, while adapting the gameplay mechanics to work well with the rest of the game. Here are some of the many tweaks made to fulfill this.

Improving Maps and Modes
The battlefields you’ll be fighting on, and the modes you’ll be playing, are of course huge areas of your Battlefield V experience. Many changes have been made, but let’s look at a handful of examples.

Balancing the War of Attrition
Rewarding experiences often come from a place of risk. To create a game where peril is inherently looming around the corner, powerful weaponry that does some serious damage is needed. To balance that, we need to find a sweet spot to make weapons feel dangerous but not all-powerful. This is where Attrition comes in, limiting health and ammunition, which affects both soldiers and vehicles. Attrition will mean more rewarding gunplay, resource strategy, balance between vehicle and infantry units, and fixes to long-standing issues like grenade spam. Since Open Beta, we’ve tweaked several Attrition-related aspects.

Main Menu
We’ve made several improvements to enhance the experience of browsing the main menu.
These are some highlights:
● On console, the navigation should now properly remember your previous selected states
when moving back in screen navigation.
● PC players can now access the “quit” button without opening the Battlefield menu.
UI/HUD
UI and HUD has seen a lot of iteration, addition and changes since the Open Beta. Below are
some of the key areas we’ve been focusing on.
Deploy Screen
● Previously a squad mate could be marked for deploy even though deployment wasn’t
available. This has now been solved and the marker will only be present when a squad
mate is available (not in combat etc.) to deploy on.
● The deploy button in the Deploy screen has been polished and no longer looks disabled
when it’s not. It now looks active when it’s possible to deploy.
● The “random deploy” selection in the Deploy screen didn’t scale correctly with different
resolutions, leaving it off center at times. This has been fixed and the icon will now
center properly.
● The combat area lines are more prominent and visible on the map in the deploy screen.
● The red “alert” header (shown in the Deploy screen as well as the Squad Camera
screen) didn’t scale properly with ultra wide screens and different resolutions.
● Fixed an issue where the mutual border line between the Axis forces base and the
combat area had the combat area color instead of the base border color.
● Players are now able to replace vehicles in the deploy screen.
● Deselects base vehicle spawn points when no vehicle is available.
● Vehicle seat information has been added to spawnable vehicles in the deploy screen.
X/Y represent occupied seats out of Y available. This is so that players will understand
why they sometimes end up outside of a vehicle when spawning – it’s due to all the
seats being currently taken.
● Added a countdown timer in the Deploy screen.
● Players won’t be able to spawn until the persistence data is downloaded.
Health bar
● The health bar now shows both the regular health as well as the regenerated health in
two different colors. This, we believe, will help players understand how much they can
regenerate and what they can expect from different choices/actions in game.
● Next to the health bar the player’s own Medic Pouch is visible. This lets the player know
when self-healing is possible and not. If a Medic Pouch is available it will have a number
next to it and if not, the icon will be faded with the number 0.
Health bar in the HUD.
HUD
● The in-world objective animations have gotten a polish pass.
● The “pick-up” icon radius has been reduced in an attempt to reduce HUD clutter when
not necessary.
● The “interaction” icon has been improved when it comes to distance scaling. It should be
clear to players which icon is the closest one to interact with.
● Some tooltips have been rewritten and iterated on to make them both easier to
understand and faster (shortened) to read. For example, the tooltip for how Ammo
Crates work is now much clearer.
● During the Beta we had an issue where Medics were shown hints specific to the Support
class. This has now been fixed and each class will see their respective hints.
● The possibility to show the weapon name in the Kill Log have now been added as an
option. Players can choose to see:
1. Weapon icon
2. Weapon name
3. Weapon name + Icon
● We’ve decreased the time it takes until the Dog Tag shows after the player manages to
do a melee takedown. This was previously queued and shown when the player was “out
of combat”. But, since performing a melee takedown is considered being in combat, this
state is now ignored and the Dog Tag award will show much faster.
● The “award” moment in the HUD was a huge topic after the Beta and this has now been
toned down quite a lot. The award moment is now much smaller and will never surpass
the crosshair. There are also different animations depending on the reward type. A
medal has a much grander visual representation than a ribbon, for example.
● Enemy icons have been removed unless they’re spotted. Previously the spotted enemy
icon has been visible through smoke as well, but this has now been fixed. Enemy icons
are no longer visible when obstructed by smoke.
● When a player manages to take out the last member in a squad and gets a squad wipe,
the number of squad members in that specific squad shows in the score log
(represented with a number of crosses – 2, 3, or 4).
● Updated how critical messages are handled in queues for objective introductions to
never lose any information during busy periods.
● Kill feed bug fixed; skulls now stack horizontally.
● Score log: added a small delay for the majors so we can queue multi-kills slightly. Also
added a short fade to better handle multi-kills.
● Score log icons and major/minor events got a slight polish pass.
● Tooltips with text now have a darker backplate for added readability.
● Polish for the squad list and the timers showing the squad members’ health and
bleeding out status.
Kill Card
● The Kill Card now shows soldier rank, class rank, and weapon rank.
● If you got killed by a headshot or through a wall, a respective icon representing this will
be shown.

Options
● Updated the HSL for our color indicators to match the RGB. Default options changed
include – Armor Hit, Headshot Hit, Hit, Colorblind Neutral, and Crosshair.
● Chat visibility default set to “When active”.
● “HUD Motion”: Option to turn off HUD motion.
● “HUD Shakes”: Option to turn off HUD shakes.
● “Kill Log Weapon”: The possibility to show the weapon name in the Kill Log have now
been added as an option.
● “Score Log Weapon Name”: Show the name of the weapon you just killed someone with.
● “Overlay Shadow Strength”: The amount of shadow on UI elements/text when on top of
a bright background. Set to 40% as default.
Revive
● The revive icon has been improved since the Beta. Revive icons now have three states:
1. Normal size – No actions taken.
2. Larger size/Pulsating – Calling for help.
3. Smaller size/Faded – Skipping revive.
● If a player calls for help while in being downed, nearby revivers will also get voice over
callouts. As a reviver (squad mate or Medic) you can spot/tag a downed player and
they’ll be notified in the man down screen. Revivers “accepting” a revive will be listed
under “INCOMING”.
● Downed players outside a radius of 50 meters will not be visible in the HUD since a
reviver won’t have time to reach them before bleeding out.
● The button prompts have been switched around in the man down screen (calling for help
LMB and skipping RMB on PC). This change is because we want the initial reaction
(muscle memory normally defaults to LMB) to be the positive one – calling for help rather
than skip the revive opportunity.
Scoreboard
● The scoreboard has been optimized and is now faster to open. In previous titles there
has been lagging a few frames leaving it feeling sluggish. This is now fixed and opening
the scoreboard is now a smooth experience.
● Downed players are now easy to recognize and separate from dead players. Squad list
on Deploy, HUD, Squad Camera, Man Down, and the Scoreboard are represented with
an ECG icon.

Step into a Dynamic World
The world you’ll encounter on the maps of Battlefield V is the most dynamic we’ve ever created. Fortifications, Bullet Penetration, dynamic weather, destruction, fire effects, collapsing debris, terrain craters – the list is long. It all results in a better, more interesting sandbox that will stand the test of live service expansion and evolution without even breaking a sweat. These dynamic aspects have seen several changes leading up to launch.

Again, these are but just a small part of the entire changelog, which you can read right here.

Don’t forget to check out the Trophies/Achievements list the game has, and also take a look at all nine Paratropper sets the game has to offer.

Game Mistakes: Is Going From Single-Player to Multiplayer Good?