In case you haven’t been leeping tabs on Battlefield V news, a large portion (and very vocal) part of the community has been rather unhappy with the Battlefield V update 5.2.2 time to kill (TTK) changes. Given we just wrapped up the holidays, DICE is slowly getting back into the mix of things, and the chief discussion so far has once again delved into the Battlefield V 5.2.2 TTK feedback.

DICE Community Manager Jeff Braddock has gone on the official Battlefield V forums and subreddit to answer a few important questions, as well as provide an ear for the community to vent out on. Chief among the concerns touched upon regarding the Battlefield V 5.2.2 TTK feedback is how DICE is still parsing through the data, and what the key points are for these data. Note that we’ve included screenshots of some of the noteworthy replies, though we’ve also included them in the post as text in case the images don’t load (or the posts get deleted). 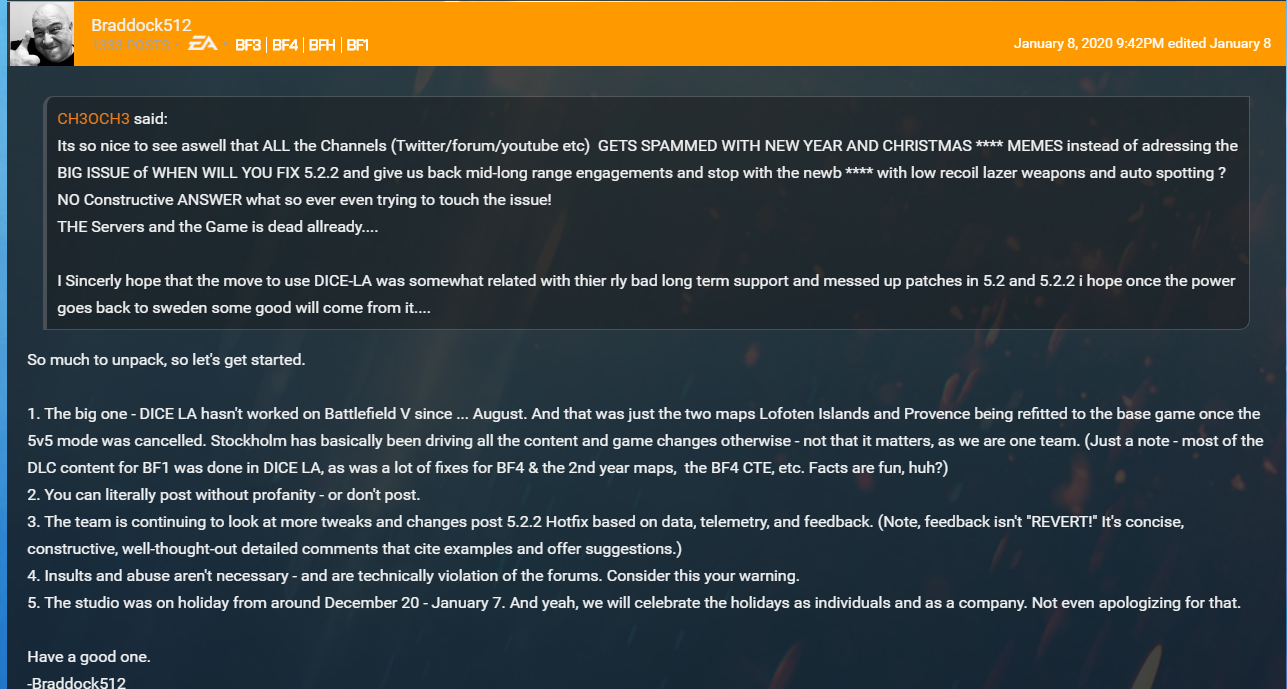 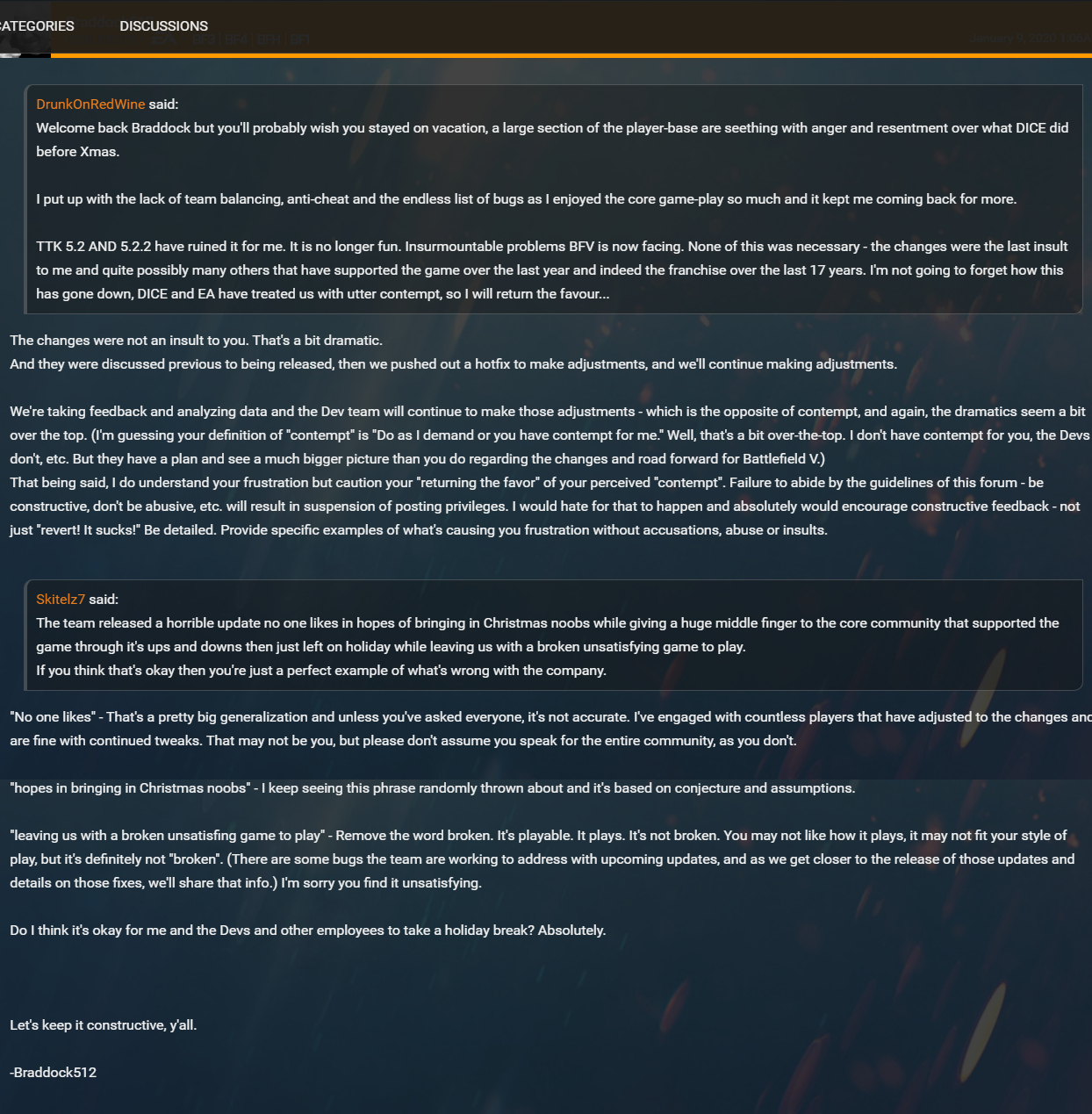 So much to unpack, so let’s get started.

1. The big one – DICE LA hasn’t worked on Battlefield V since … August. And that was just the two maps Lofoten Islands and Provence being refitted to the base game once the 5v5 mode was cancelled. Stockholm has basically been driving all the content and game changes otherwise – not that it matters, as we are one team. (Just a note – most of the DLC content for BF1 was done in DICE LA, as was a lot of fixes for BF4 & the 2nd year maps,  the BF4 CTE, etc. Facts are fun, huh?)
2. You can literally post without profanity – or don’t post.
3. The team is continuing to look at more tweaks and changes post 5.2.2 Hotfix based on data, telemetry, and feedback. (Note, feedback isn’t “REVERT!” It’s concise, constructive, well-thought-out detailed comments that cite examples and offer suggestions.)
4. Insults and abuse aren’t necessary – and are technically violation of the forums. Consider this your warning.
5. The studio was on holiday from around December 20 – January 7. And yeah, we will celebrate the holidays as individuals and as a company. Not even apologizing for that.

The changes were not an insult to you. That’s a bit dramatic.
And they were discussed previous to being released, then we pushed out a hotfix to make adjustments, and we’ll continue making adjustments.

We’re taking feedback and analyzing data and the Dev team will continue to make those adjustments – which is the opposite of contempt, and again, the dramatics seem a bit over the top. (I’m guessing your definition of “contempt” is “Do as I demand or you have contempt for me.” Well, that’s a bit over-the-top. I don’t have contempt for you, the Devs don’t, etc. But they have a plan and see a much bigger picture than you do regarding the changes and road forward for Battlefield V.)
That being said, I do understand your frustration but caution your “returning the favor” of your perceived “contempt”. Failure to abide by the guidelines of this forum – be constructive, don’t be abusive, etc. will result in suspension of posting privileges. I would hate for that to happen and absolutely would encourage constructive feedback – not just “revert! It sucks!” Be detailed. Provide specific examples of what’s causing you frustration without accusations, abuse or insults.

“No one likes” – That’s a pretty big generalization and unless you’ve asked everyone, it’s not accurate. I’ve engaged with countless players that have adjusted to the changes and are fine with continued tweaks. That may not be you, but please don’t assume you speak for the entire community, as you don’t.

“hopes in bringing in Christmas noobs” – I keep seeing this phrase randomly thrown about and it’s based on conjecture and assumptions.

“leaving us with a broken unsatisfing game to play” – Remove the word broken. It’s playable. It plays. It’s not broken. You may not like how it plays, it may not fit your style of play, but it’s definitely not “broken”. (There are some bugs the team are working to address with upcoming updates, and as we get closer to the release of those updates and details on those fixes, we’ll share that info.) I’m sorry you find it unsatisfying.

Do I think it’s okay for me and the Devs and other employees to take a holiday break? Absolutely.

Over on the Battlefield V subreddit, Braddock has also engaged with the community and has even touched upon the data the studio has collected so far, and how they interpret some of it, and what are “red flags.” 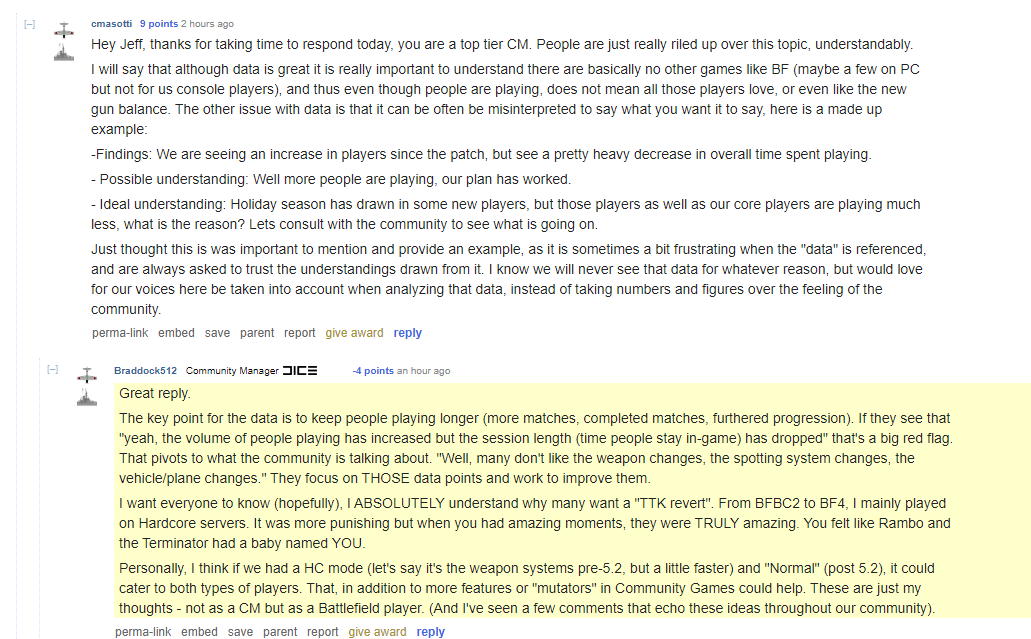 The key point for the data is to keep people playing longer (more matches, completed matches, furthered progression). If they see that “yeah, the volume of people playing has increased but the session length (time people stay in-game) has dropped” that’s a big red flag. That pivots to what the community is talking about. “Well, many don’t like the weapon changes, the spotting system changes, the vehicle/plane changes.” They focus on THOSE data points and work to improve them.

I want everyone to know (hopefully), I ABSOLUTELY understand why many want a “TTK revert”. From BFBC2 to BF4, I mainly played on Hardcore servers. It was more punishing but when you had amazing moments, they were TRULY amazing. You felt like Rambo and the Terminator had a baby named YOU.

Personally, I think if we had a HC mode (let’s say it’s the weapon systems pre-5.2, but a little faster) and “Normal” (post 5.2), it could cater to both types of players. That, in addition to more features or “mutators” in Community Games could help. These are just my thoughts – not as a CM but as a Battlefield player. (And I’ve seen a few comments that echo these ideas throughout our community).

We’ll keep an eye on this and report on any new and official info regarding TTK changes and whatnot. Are you satisfied with the current TTK of Battlefield V? Do you think the community is overreacting? Let us know your thoughts in the comments.

In the meantime, don’t forget to check this week’s reset of challenges and rewards, as well as our ranking piece on the best Battlefield games of the decade.