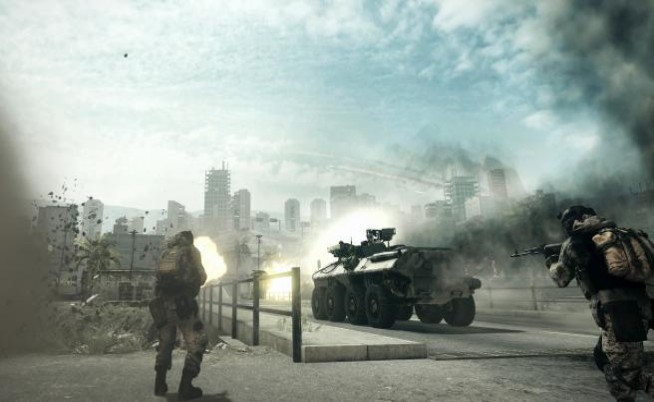 More details about Back to Karkand and color-bind mode in Battlefield 3 have been revealed. Also, DICE shares it’s response to recent development rumors.

Besides the graphics, some of the biggest differences between the PC and console versions of Battlefield 3 are the map sizes, especially in the Conquest game type. Where you might find maps that include five flags on the PC, those same maps might include only three flags on console eg. Operation Firestorm. However, with the release of Back to Karkand this December, DICE is looking to change that. According to Global Community Manager, Daniel Matros, consoles will also be receiving five flag maps. However, recent GameSpot PS3 footage of Back to Karkand showed the maps Strike at Karkand and Gulf of Oman to be only three flag maps. We’ve yet to have seen console footage of Sharqi Peninsula or Wake Island, but if only one map were to include five flags on console, it would most likely be wake island with its lengthy U-shape design.

As a follow up to one of our recent articles detailing how they will be handling cheaters in Battlefield 3, DICE has recently announced that they have “banned hundreds of offending accounts and have stats-wiped additional accounts for exploiting (such as boosting).” Lookout for more!

Many fans are still on DICE’s tail regarding support for the color-blind. It’s something that is a must for Battlefield 3 considering the recent Modern Warfare 3 had color-blind support at launch. Thankfully, Tomas Danko, VO Producer at DICE, has some new info. He confirms color-blind mode “has not been forgotten, only postponed. This is an important issue to lots of people at DICE.” Expect updates as more details of the upcoming patch become available. Follow MP1st on Twitter and Facebook to stay informed!

Despite recent rumors of Battlefield 3 switching to consoles as the lead platform mid-development, Danko assures us this was not the case. “We spent years making the game on PC only, then ten months to fit it onto consoles AFTER the design was done,” he said in response to one distraught fan. Take from this what you will, but it’s important to recognize how much work DICE has put into the PC version of Battlefield 3.

Leave your thoughts below!

The Legacy of Halo’s Multiplayer and Its Community