Along with the recent PS3 and PC patches came some mysterious and unannounced updates to Battlefield 3’s social, stat-tracking service, the Battlelog.

You’ll now notice, upon hovering your curser over the “Multiplayer” tab on the Battlelog, that two new options under “Matches” appear: “View matches” and “Create a match.” Upon clicking “Create a match,” you’ll be taken to this screen below:

Nothing yet. But we do know that this feature will be available across all three platforms. Of course, many speculate that this feature will help open up Battlefield 3 to the e-sport audience, as DICE has admitted it being a goal of the team for quite some time now. Could this also be one of the features that Senior Designer Gustav Halling teased in our earlier reports?

Others speculate that we may soon (finally) be seeing a spectator mode or Battlerecorder make its way to Battlefield 3. A few things lend to this idea, one being that one of the new menu items is titled “View matches.” On top of this, we’ve also gathered a few clues ourselves to a Battlerecorder which you can check out right here. Lastly, a user on the Battlelog posted these codes found within the Battlelog:

Notice the word “spectator” a few times? It’s certainly obvious. Perhaps the inclusion of “matches/betasignup/” signifies that DICE will first run a beta to test this new feature as well. Hopefully we’ll be hearing more of these features soon.

Update: As QwietStorm has mentioned in the comments below, “My Matches” in the main menu of Battlefield 3 mentions e-sport matches. We’d also like to thank Geoff for providing us with the image below of the notice given to players when selecting this item in the PS3 multiplayer menu. 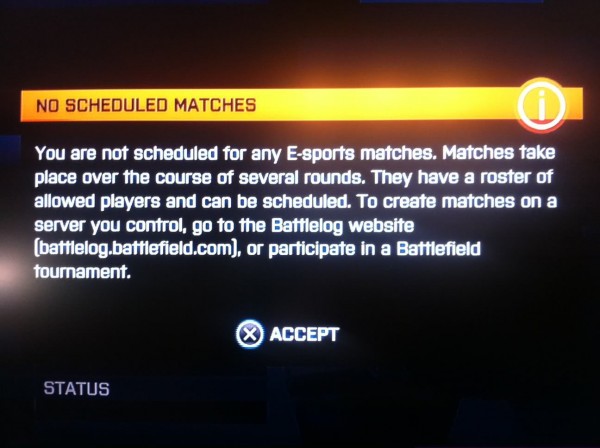 On a less official note, “Better Battlelog” has recently teamed up with BF3Stats.com to provide the ultimate stat-tracking add-on to the Battlelog service. You may remember a while back our report on the Better Battlelog browser add-on which allows for much more in-depth stat-tracking than the original Battlelog provides. Having recently partnered with BF3Stats.com, players can now view extremely detailed graphs and tables of a wide range of stats. Check out the image below to see a quick example of how this updates tracks stats like your score per minute, kill/death ratio and win/loss ratio.

You’ll notice the ability to track your stats over time, making it much easier to see your progression throughout your BF3 career.

Make sure to give the Better Battlelog service a try and let us know in the comments below what new features you think DICE will be providing in the near future!

New Modern Warfare 3 Game Mode ‘All or Nothing’ Gameplay Footage