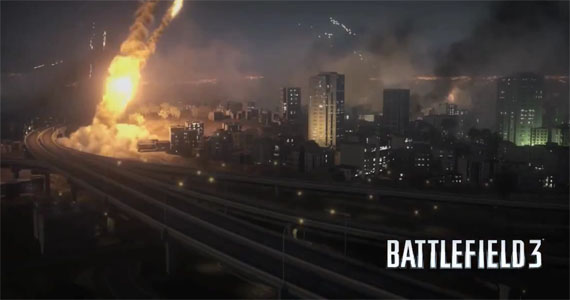 One of the biggest differences between the Call of Duty and Battlefield franchises that you will hear many fans talk about is the differences in the responsiveness of the controls. Many argue that Call of Duty has very fast paced, fluid and responsive controls, which it needs being a twitch shooter and all. The controls in Battlefield are deliberately “heavier” and feel more human-like. Alan Kertz, aka Demize99 commented on this when asked if there would be any improvement to the Battlefield 3 controls. He said, “We’ve really improved responsiveness and control, and also given more sensitivity range than previous BF console games.” How do you guys feel? Did you like the controls in BFBC2, or would you prefer something faster paced and more responsive?

This one just came in last night. Kertz tweeted “All maps have all game modes,” in response to one fan’s question of whether or not Caspian Border was a map that included the Rush gametype (it was shown in trailers featuring the Conquest gametype). As many of you know, Battlefield: Bad Company 2 included some maps that were exclusively meant for either Rush or Conquest only. Personally, many of these maps like; ‘Isla Inocentes’ or ‘Cold War’, which were Rush-only maps; and ‘Heavy Metal’ or ‘Panama Canal’, which were Conquest-only maps, happened to be some of my favorites. I think it’s important to have at least some maps that are built and totally focused around one game type. Do you agree that these maps tend to stand-out from the rest?

On a more interesting note, let’s talk about some more capabilities of the Frostbite 2.0 engine. One fan asked Stefan Boberg, aka bionicbeagle , technical director on the Frostbite engine at DICE, whether there will be a day and night cycle in Battlefield 3 multiplayer. Boberg said that “the engine is capable to do it, yes. Does bf3 use it? I guess time will tell…“

Sorry to leave you guys on a cliffhanger, but this is interesting stuff! Personally, I think it would be awesome to see the dawn turn to day, or dusk turn to night during a match of Rush. Since these game types can carry on for quite sometime, and the battles take place on many different parts some pretty big maps, I could definitely see it being a realistic possibility.

What do you guys think? Let us know in the comments!

Be sure to check out our update on destruction in Battlefield 3.

modernwarfare4.com Wants You to Play Battlefield 3

15 thoughts on “BF3 – Day/Night Cycles in MP? All Gametypes on All Maps and More Responsive Controls”