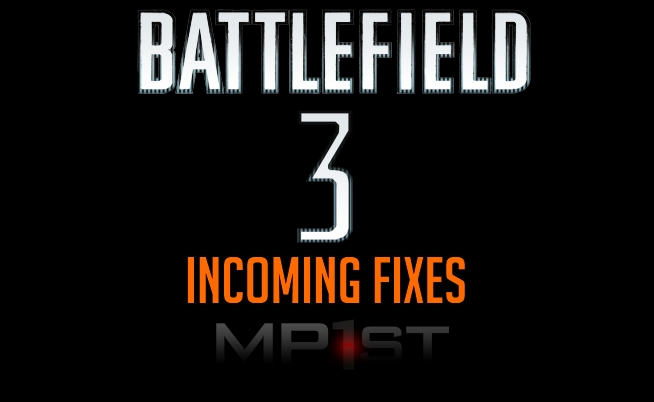 Today, some new details have surfaces as to what the developers behind Battlefield 3 are looking into fixing.

Some players have been noticing that there seems to be some sort of random bullet spread on some of the weapons, if not all of them. This was demonstrated rather clearly using a bolt-action rifle in this video. Senior Gameplay Designer, Alan Kertz, has taken note of the issue saying, “I’m aware, should be addressed in a future update,” which also confirms that it is indeed a problem. It was also suggested to Kertz that something should be done about the last B MCOM crate in Sharqi Peninsula, as players are reporting it to be too easily defended. Though some fans suggested moving the crate, Kertz responded, “I don’t think the crate should be moved, since you want to assault the TV station, but we can shift defender spawns.”

If you’ve missed some other recent issues that DICE devs are currently working on, check out: BF3 Devs Respond to 2143 Rumor, Platoon Changes, and More

Tomas Danko, Sound Producer at DICE, has some interesting news for us today. He officially announced that the “Comrose 2.0 will launch in February, even though some previous patches included part of the functionality. Submission procedures are slow.” You can read more about these changes here and check out it’s possibility of it making it onto consoles. When asked what would be included in the new Comrose, he responded, “basically a more old school and complete manual comrose including some more commands.” This is definitely something PC players can look forward to, though it may be arriving fairly late. Danko was also recently asked about the audio drop-outs that many players have been noticing on consoles. If you haven’t experienced it yet, it basically drops a certain portion of the audio at random times during gameplay for a random amount of time, if not until the end of the match. When asked if he was aware of the situation, Danko responded, “on console, yes. It’s a performance issue.”

What do you think about the last B MCOM crate on Sharqi Peninsula? Also, have you been noticing the random bullet spread and audio drop-outs? Let us know in the comments below!