Borderlands 3 season pass 2 has been announced by 2K and Gearbox in the game’s official website, detailing the next downloadable add-on content.

Here’s the details on the next season, which will be released on November 10:

Season Pass 2 will include two all-new downloadable content add-ons – Designer’s Cut and Director’s Cut – plus brand new looks for all four Vault Hunters, to be revealed later this month. First up is Designer’s Cut, which creates totally new ways to play Borderlands 3 by introducing an additional Skill Tree for each Vault Hunter, a new standalone mode called Arms Race, and more.

Additionally, 2K and Gearbox have also confirmed that a next-gen update for Borderlands 3 is on the way and will be released for the PS5 and Xbox Series X|S as a free upgrade. 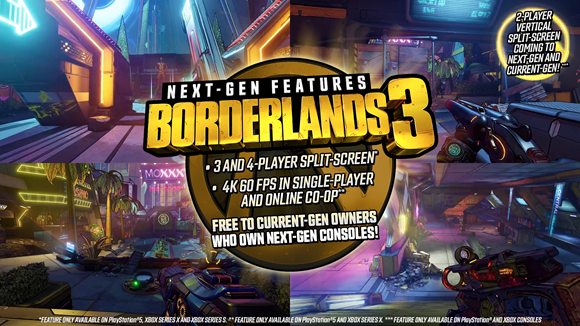 As mentioned in the image above, the next-gen version of Borderlands 3 will run at 60 frames-per-second in 4K resolution during single-player and online co-op. As for local multiplayer, players can expect 3-4 player split-screen to be available as well.

Players can expect the free update for next-gen on November 10 (Xbox Series X), and November 12 (PS5). Read on for details regarding the progression and save file details.

Existing owners of Borderlands 3 on current-gen platforms can easily transition to the next-gen version within the same console family. If you own Borderlands 3 on Xbox One, you’ll be able to play the Xbox Series X/S version, and if you own the game on PlayStation 4, you’ll be able to play the PlayStation 5 version. Your add-on content and save files can be ported to next-gen consoles within the same family, so you can jump straight back into the action right where you left off. (Please note that if you own a physical disc of Borderlands 3, you will need the Xbox Series X or standard PlayStation 5 console models that include a disc drive to take advantage of all these features.)

Be sure to check out our related feature on Borderlands 3’s next-gen support and skill tree details. The game is now available for  PS4, Xbox One, and PC.